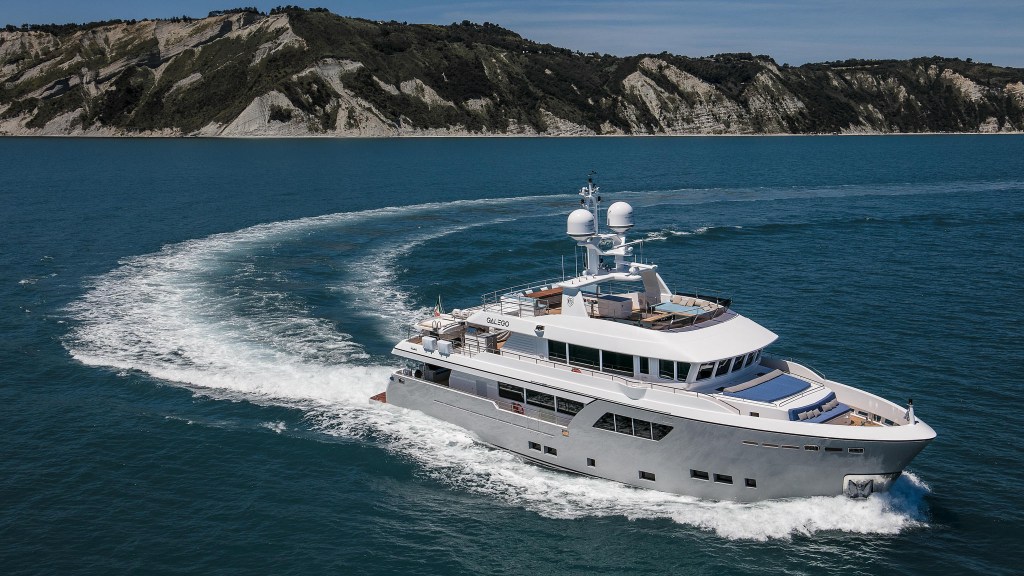 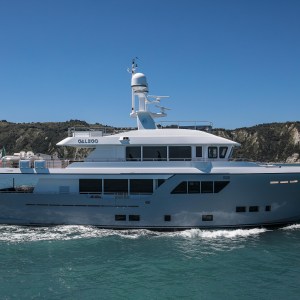 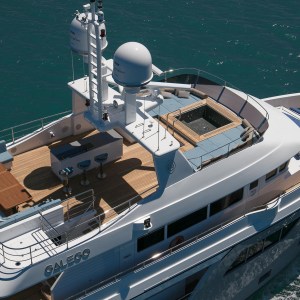 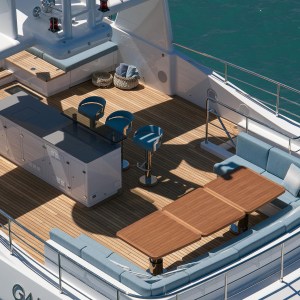 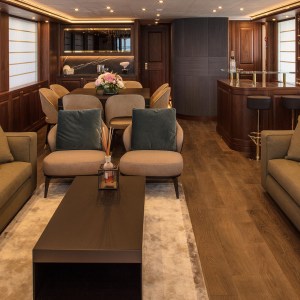 Cantiere delle Marche was the first builder to realize that an expedition yacht doesn’t have to mimic a utilitarian research vessel to explore the world. Its Darwin Class 102 name may sound adventurous, and it is, but the three 102s that have been delivered contain luxurious custom interiors that any superyacht owner, explorer or not, would be proud to show off.

Galego, delivered to its owner several weeks ago, has Hermès wallpaper, Poltrona Frau leather walls, custom-made freestanding furniture, and many other fine touches that designer Pierluigi Floris used in the bespoke interior. Galego paired classical walnut walls and floors with modern furniture from Minotti and Baxter to maximize the visual impact. Even the huge wheelhouse, designed for an intrepid vessel with a 4,700-mile range, is covered in leather.

Make no mistake: Galego is designed for exploring the world. The yacht has a 12-milimeter steel hull with aluminum superstructure, cupronickel pipes that resist corrosion, independent rudders for redundancy, three generators, and electric-fin stabilizers. Its wastewater treatment systems were sourced from the world of work ships, so they’re designed to work 24/7 in all conditions. Those details are the difference between a yacht that looks like it can explore remote areas for weeks at a time and those, like Galego, that can.

The rugged, almost tug-boat-like look of Galego’s exterior is designed to hold up to big seas and squalls, but CDM created the boat to the owner’s specs. The owner, a tall man, wanted increased headroom throughout the boat, so CDM reconfigured the interior to be 7 feet 4 inches throughout. That also meant increasing sizes of the doors and windows. The garage aft was also expanded to hold not just the tender, but more water toys and a scuba center.

The owner has a large family who will be spending weeks aboard, including the family’s current eight-week shakedown cruise through Greece and Turkey, so he opted for a custom sundeck. It has a lounge area with a large sofa and hydraulic tables that lift up and down, with a galley and wet bar, for alfresco dining and other social gatherings. In another section, the outdoor fitness area with pool allows complete workouts without having to install a gym in the transom area.

Galego has four staterooms on the lower deck, including a full-beam master, as well as an extra cabin for two guests. There are also crew quarters on the main deck for five. Like the rest of the yacht, fit and finish are excellent. The 102-footer is powered by twin Caterpillar C-18 engines for a top speed of 13 knots, with a cruise speed of 11.5 knots. At 9.5 knots, the boat has its transatlantic range of 4,700 miles. Galego will make its public debut at the Cannes Yachting Festival.