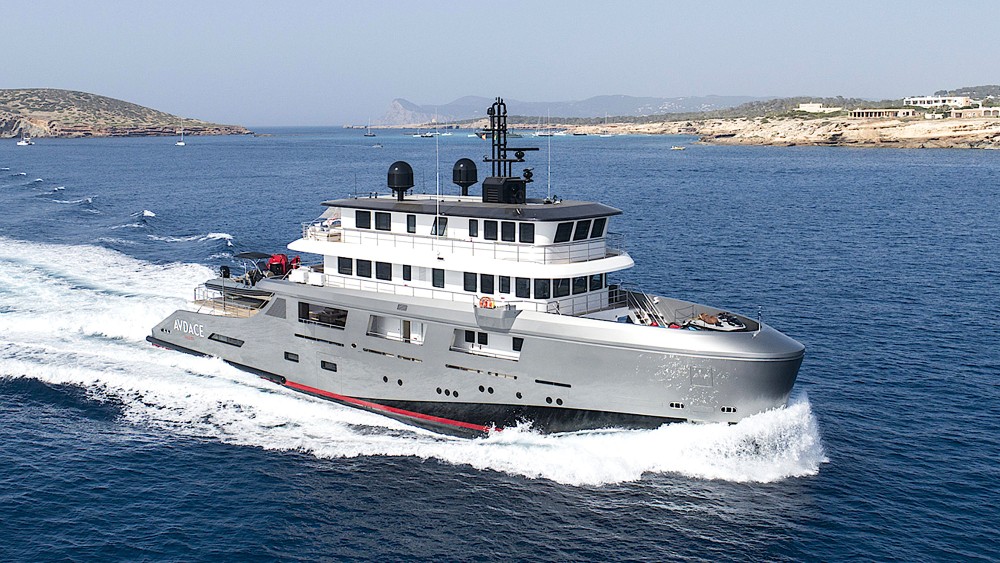 Fun-loving, hard-working Italian businessman Andrea Merloni knew exactly what he wanted when he commissioned his rugged, go-anywhere, 140-foot explorer yacht Audace. With plans to spend most of his time living aboard, the wealthy, single, 50-something was happy to sacrifice sleek styling for acres of space for himself, not to mention his multitudes of friends.

At Audace’s home port on the Balearic party island of Ibiza, Merloni was famous for inviting aboard top DJs to entertain upwards of 200 guests, who danced the night away on the yacht’s huge lower-deck.

Merloni, former president of the Italian white-goods giant Indesit—which was sold to Whirlpool for $1 billion in 2014—succumbed to a heart attack in November 2020 at age 53. He’d owned Audace for just over a year.

“Andrea lived life to its fullest and created one of the greatest custom explorer yachts of her size ever built,” Fillipo Rossi, commercial director and partner at Swiss yacht designer, Floating Life, told Robb Report.

Based on one of Floating Life’s K42 (138-foot) explorer yacht designs, Audace, or “audacious” in Italian, reportedly came about after a lively evening with Merloni and close friend, Floating Life CEO Andrea Pezzini.

While the basic design of the K42 called for a triple-deck layout, one thing that was non-negotiable for Merloni was the addition of a top-deck “apartment” that he wanted as his private suite.

The private apartment on the top deck gives the boat a top-heavy profile, but it was the owner’s oasis from guests and crew.  Courtesy CdM

“Yes, the addition makes the yacht look a little awkward, maybe a little top-heavy,” says Rossi. “But Audace was to be his home for many months of the year, and he wanted a private space that was comfortable and, most important, well away from the crew and his guests.”

The yacht also had to be capable of accommodating a multitude of the owner’s “toys.” Like a custom Land Rover Defender 4×4—later switched to an equally boxy Mercedes-Benz G-Wagon—plus a tough BMW R 1200 GS off-road motorcycle. Both would be craned in and out of a deep well in the bow. Merloni also wanted his speedy, 33-foot RIB tender to be carried on-deck while the yacht was under way. That meant installing a towering, nine-ton-capacity crane—painted Ferrari red—on the aft deck.

Cantiere delle Marche on Italy’s Adriatic coast built Audace. It took two years and a reported 200,000 man-hours to complete the yacht. To make sure it could tackle the toughest of conditions, Audace came with inch-thick steel plating around the bow, and a pair of Caterpillar C32 Acert diesels to punch it through the feistiest of seas at 18 mph. At a more stately 12 mph, it has transatlantic range of 5,400 nautical miles.

The Ferrari-red crane next to the sunbeds is for hoisting the boat’s 33-foot tender. The bow has a garage for the owner’s Land Rover Defender.  Courtesy CdM

Shortly after the yacht’s launch, anchored off the coast of Sicily, the weather forecast called for a huge, menacing storm to hit the area. Merloni called designer Pezzini and told him to fly to Sicily right away so they could head to Sardinia that day. “He wanted to find out just how seaworthy the boat was,” says Rossi. “It came through with flying colors.”

Audace’s interior has the same no-frills, utilitarian look as the exterior. Instead of a traditional salon and dining area, Merloni went for a wide-open space with a bar, a few sofas and a whopping 98-inch Samsung television. To be able to use the area as a dance floor, it features a DJ booth, a state-of-the-art sound system, and walls packed with industrial-grade sound-proofing, so as not to disturb neighbors.

The professional kitchen is much larger than galleys on similar-sized yachts, but the owner wanted to be able to feed 60 at sit-down dinners.  Courtesy CdM Yachts

To feed the legions of guests, Audace has a massive Italian-built Marrone professional kitchen. During big fetes, two chefs would regularly whip up gourmet meals for up to 60 sit-down diners.

“The Merloni family has told us they hope to continue to cruise Audace, and hopefully take her on the grand adventures Andrea Merloni had dreamed about,” says Rossi. “She’s certainly tough enough to go anywhere.”