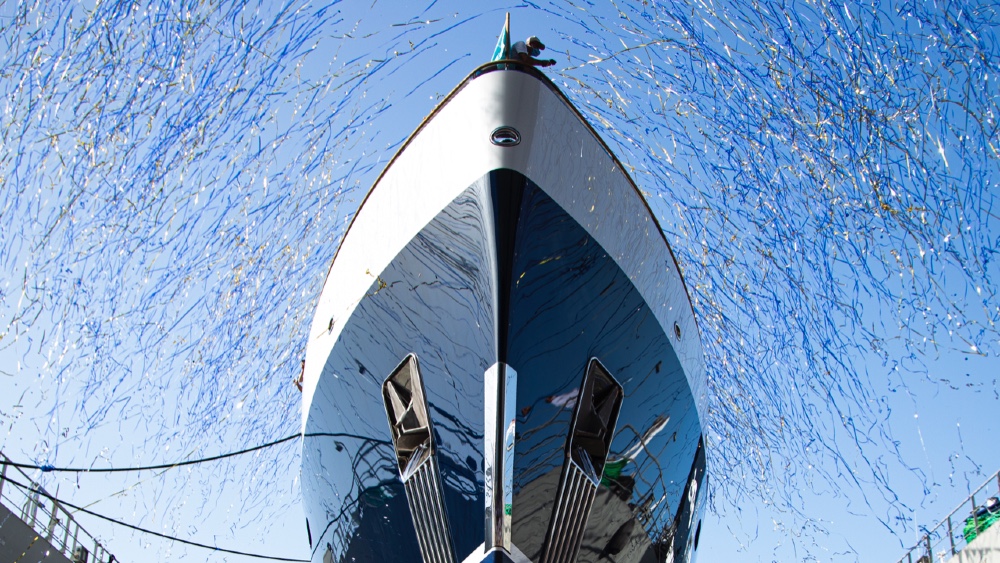 Blue II, which started off life as Project Lombok, has been launched at the Turquoise Yachts shipyard in Istanbul. The 184-foot André Hoek design is quite a departure for Turquoise, which is known for its long, sleek contemporary motoryachts. Blue II is an authentic explorer yacht but Hoek gave it a profile that is reminiscent of a classic steamship. She is designated as ice-class 1B, giving her the ability to explore the polar regions and Northwest Passage.

The four-deck design includes sizable garage space for two large tenders, with a total interior volume of 785 gross tonnes. The boat is also equipped with diesel-electric propulsion that allows her to run the house systems on silent mode for extended periods.

Turquoise was started in the 1990s, but its two founding companies, Proteksan Yachts and Turquoise Yacht Construction, had long, successful histories in the superyacht sector. The yard has launched many impressive yachts, including its first 164-foot motoryacht, Turquoise, considered the first world-class superyacht to come from Turkey. Since then, 20 other superyachts have extended its reputation, ranging in size from 131 to 253 feet. They include the 253-foot Go, which was launched in 2018, 238-foot Vicky and 108-foot sailing yacht Simba, both launched in 2012, and the 238-foot Quantum of Solace, delivered in 2012.

Blue II shows the yard’s capabilities. Hoek Design, working with Vickers Studio and Dols Home, created the interior, which combines classic and contemporary, with subtle colors and teak detailing. The layout includes an owner’s suite on the upper deck, mid-deck VIP suite, four guest cabins, and owner’s office. The beach club has a gym, sauna, Turkish Bath and steam room. There are also accommodations for the captain and nine crewmembers.

The boat was launched earlier this week but, because of Covid-19 restrictions on flights, the commissioning will take place remotely. Turquoise said delivery is still on track for early July.