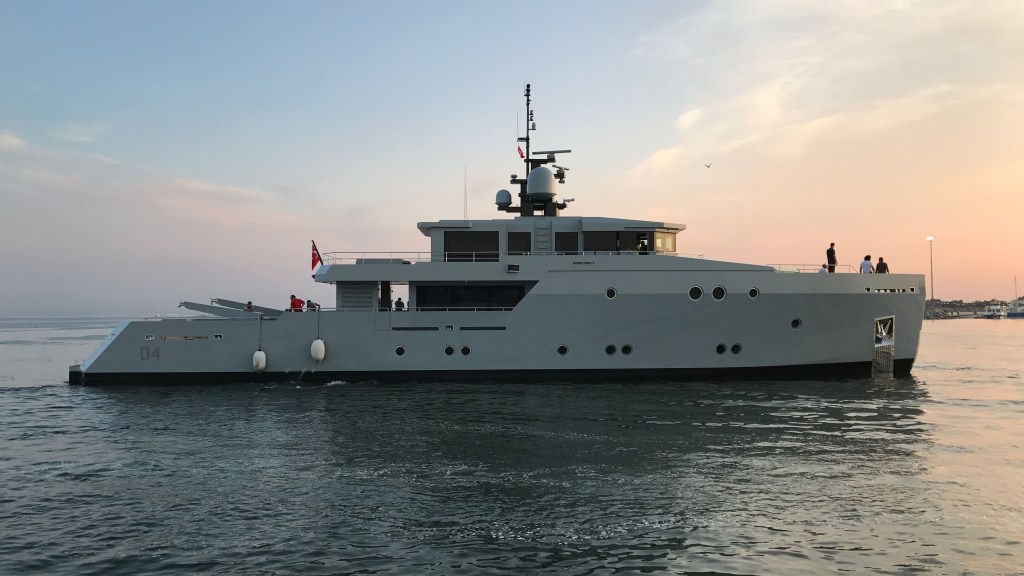 Last year, the 129-foot Tansu Sexy Fish was one of the more interesting explorer yachts at September’s Monaco Yacht Show. Its buttoned-down, go-anywhere hull was a fashion statement that had a militaristic/minimalist design, along with signature portholes. The boat also had its contrasts, including one of the most open, light-filled interiors of any expedition yacht in its class. The Istanbul yard promises a repeat performance at the end of this month with the delivery of the 128-foot Project Echo-R, whose name was just unveiled as Esosh.

As the most recent launch of the four yachts in the Tigershark class, Esosh bears a striking family resemblance. Its profile is close to Sexy Fish, with a military-looking hull that includes a vertical bow, high bulwarks, imposing pilothouse, and open aft deck with space for two tenders and multiple jet skis. The wood-and-composite hull, built to Rina standards, is intended for traveling long distances. Esosh’s main engines are twin 800 hp CAT C-18s, and it also has two Northern Lights 55 kW generators that power all onboard systems. At night, the smaller load is carried by the much quieter Northern Lights 20 kW generator.

Netherlands-based Diana Yacht Design was responsible for the Tigershark class’s naval architecture, while Riza Tansu created the exterior. UraStudio did Esosh’s interior. The yacht has four staterooms for eight guests and, according to Diana Yacht Design, all are “generously sized.” They include one VIP and two guest suites belowdecks and a large master suite on the main deck. The master has a large en-suite bathroom, walk-in closet, and good water views through the yacht’s signature portholes. Two crew cabins, with galley and rec room, are on the lower deck, while the captain’s cabin is near the pilothouse. Esosh has five crew.

The yacht’s primary saloon, with entertainment and dining areas, is on the main deck, with the galley nearby. The deck also has a day head, an important feature that makes using the exterior beach area a pleasure. A second saloon on the deck above, with wet bar and lounges, also connects with a smaller exterior deck with outdoor dining table and lounges. Tansu took great pains to create usable exterior areas across the yacht. Despite the tight, intricate look of Esosh’s hull from a distance, the yacht’s decks are open and spacious. Tansu said the yacht performed well during sea trials, and will soon be delivered to its owner.