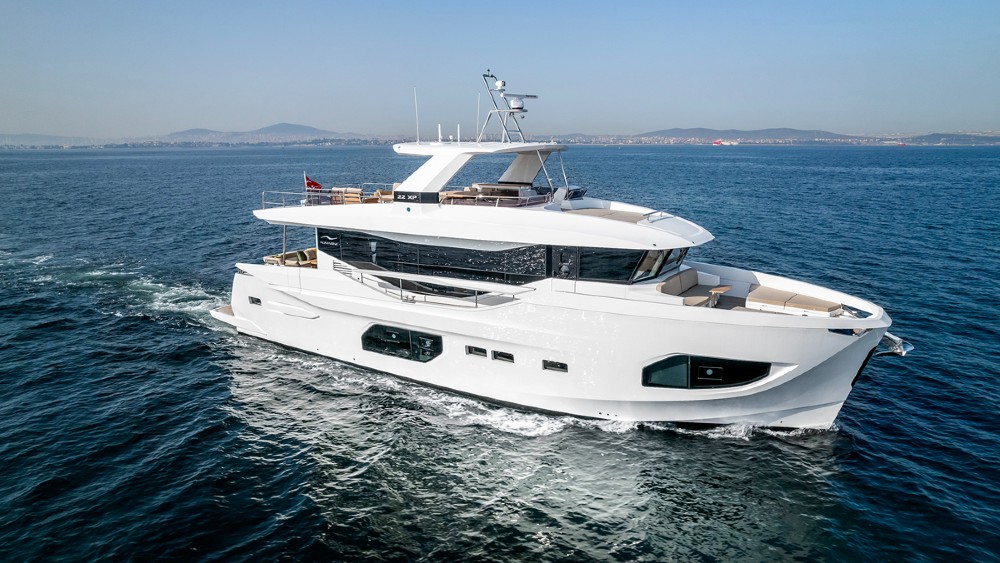 When Numarine announced the 22XP, the latest, 74-foot iteration of its XP expedition line, there was a twist. The 22XP would come in two different forms: identical above the waterline, but totally different underneath. One version would be a slow-moving, full-displacement vessel with a full keel and wave-piercing bulb, while the other would be a semi-displacement cruiser with speed rails. The slower version would come with twin 425 hp Cummins engines and a 12-knot, or 14.5 mph, top speed, while faster version would have 1,200 hp MANs, while moving at a faster clip of 21 knots, or 24 mph.

So crazy, in fact, it could just start a trend.

The 22XP in the background near its next-largest sistership, the 26XP. The displacement-hulled 22 will come in a semi-planing version.  Courtesy Numarine

“We had clients who loved the boat when they saw drawings of it—especially the amount of volume it offered,” Numarine CEO Omer Malaz told me onboard the 22XP last week as it sliced through the steely waters of Istanbul’s Bosporus Strait. “But not everyone wants to go 12 knots. So, what was I to do?” He pauses for effect: “I made a fast version of course.”

Most boat builders typically work the other way around. They build a hull and design several different topsides for it. This is the first time that we’re aware of, where a yacht builder designed two entirely different hulls for the same interior and superstructure. It’s not a bad idea since the explorer cruiser market has exploded, but has gone in two directions: Some builders make slow, long-distance cruisers while others go for faster semi-displacement yachts. Never the twain shall meet. Until now.

The boat has a minimalist interior, surrounded by large panes of glass.  Courtesy Numarine

The faster iteration of the 22XP has speed numbers much more in line with a typical large express cruiser. Beyond the 24-mph top speed, the boat cruises at a sprightly 21 mph.

Regardless of the bottom, the visible portion of the 22XP certainly looks the part of the explorer. With imposing bulwarks, an inverted, raked-back windshield, and a superstructure that spans the bulk of her 74’2” length—providing loads of interior space on the main deck—the vessel has the bones of a boat ready to go exploring in the fjords of Norway of down to Tierra del Fuego.

The master suite admidships was designed as a full-beamed sanctuary, thanks to the smaller engines of the long-distance version.  Courtesy Numarine

However, this burly outline is delicately offset by some sharp design choices made by the boat’s exterior designer, Can Yalman, a longtime Numarine collaborator. In particular, the angular hull windows forward help to minimize the boat’s apparent bulk, while a gracefully curved flybridge reaches way back, lending a certain softness to the upper part of the superstructure.

The full-keel version of the boat that I was aboard performs like a typical explorer as well, with a design emphasis not just on volume and comfort, but of course on performance and range.

The flybridge is the boat’s main social area.  Courtesy Numarine

It should come as no surprise that this yacht has legs. At an 8-knot cruise she can travel 2,000 nautical miles—enough to make it from New York City to Curacao on one tank of fuel. And though the Bosporus was characteristically calm when I was there, the 22XP felt solid as we pushed through the sizable wakes of the many passing tankers and cargo ships that frequent this important passage. It’s a characteristic attributable to the boat’s construction method. The hull is hand-laid with vinylester resin because the builder feels the hand-laying process lends boats more punch over the more weight-savings-conscious resin-infusion process many other builders favor.

This model’s layout was of particular import to Numarine during the design process, as onboard comfort was a necessity. On the accommodations level, there’s a full-beam, en suite amidships master, though it also has a massive forepeak VIP that benefits from a beam that carries well forward, and which is also well lit, thanks to the big hull side windows. I’d imagine some owners would be tempted to claim this space as their own.

A long salon from the stern to the helm station.  Courtesy Numarine

But Malaz is not one of them. “I’d stay in the amidships master because it’s a bit bigger, and also quieter under way,” he says. The rest of the lower level is fleshed out with two additional cabins, including a guest to starboard with an athwartships queen-sized berth.”

The Numarine founder has long been a speed demon on the water—including years of racing—so this seems like a pivotal moment. “I just want a small engine and a big boat, with lots of volume,” Malaz says. “Sound attenuation has become important to me. I want the boat to be quiet—to the point where I can hear people around me.” Then he pauses. “At least quieter than my 94-mph tender.”