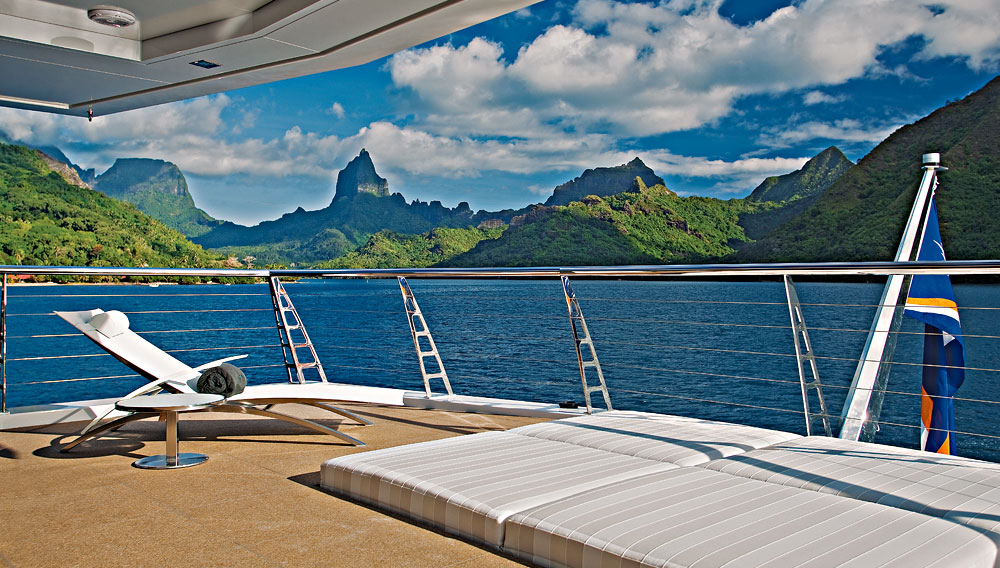 On most megayacht charters, adventure means motoring from one idyllic Caribbean cove to another, or hopping among the Mediterranean’s most glamorous ports of call for cocktail hour. But a new breed of explorer yachts is bringing the same level of comfort and service one might find in Monte Carlo to the extreme ends of the Earth. From Greenland to Patagonia, these durable, long-range expedition vessels offer safe access to rarely visited regions of the world—and a host of tenders and toys for exploring them. Here we present five of our favorite megayachts for charting the adventure of a lifetime.

Nice Catch | Built for traveling through icy waters, Aquos Yachts’ 148-foot explorer vessel Big Fish cruises comfortably from the Northeast Passage to Ant­arctica. But one of the standout features of this 10-month-old yacht is best enjoyed in the tropics: a massive foldout deck that wraps around the stern, creating a “beach” that provides passengers easy access to the water.

Charter guests can hit the water in one of several tenders and toys, which include a 14-foot Nautica RIB and a custom 26-foot boat with a 300-nautical-mile range. Big Fish packs 12 sets of diving gear (the crew includes a divemaster), as well as snorkeling, fishing, and windsurfing equipment; paddleboards, wakeboards, and surfboards; and water skis and kayaks. Crew members can capture all the action with Big Fish’s two underwater cameras, images from which can be displayed on the main salon’s three-story video wall.

Thanks to its stash of water-sports equipment, and its ability to access remote destinations, Big Fish appeals to an active clientele. “One charter party turned up in Tahiti on their [Gulfstream] GV,” says Jim Gilbert, the commercial director for Aquos Yachts. “They went directly to the stern beach [deck], unpacked their kitesurfing bags, and took off for a sail around the island.”

Steady As She Goes | Like most charter yachts, the Lürssen-built Northern Star spends plenty of time in the Mediterranean and Caribbean seas. But with a 7,000-nautical-mile range and a hull built to ice-class specifications, this 247-foot explorer is equally suited to navigating the Earth’s extremes. Recent charters have taken Northern Star from Greenland and Norway to the Galápagos Islands and through the Panama Canal. With its hull, alloy superstructure, advanced sound- and vibration-reducing features, and zero-speed stabilizers, the yacht remains a comfortable ride in virtually all sea and weather conditions. (According to Sean Zamora at Moran Yacht & Ship, the charter broker for Northern Star, crew members claim that one cannot feel any movement on the boat while in rough waters.) The vessel’s double-thick windows—several of which slope inward to ensure that snow and rain do not stick—offer unobstructed views of the surrounding sea. For an even closer view, passengers can embark on an underwater adventure from Northern Star’s dive center.

Cruising Areas Based in the Mediterranean in the summer, but available for charter worldwide

Solid Choice | Built by the 104-year-old Ger­man shipyard Abeking & Rasmussen, Silver Cloud has a Small Waterplane Area Twin Hull (SWATH) marked by a superwide, 58-foot beam. The bulk of the vessel’s displacement is below the waterline—a feature unique to this type of design—which makes the 135-foot expedition yacht nearly impervious to most wave turbulence. The water-bound fortress accommodates as many as 12 guests in five staterooms and keeps them entertained with a 39-foot Intrepid Walkaround outfitted with deep-sea and sportfishing gear, as well as a 23-foot Novurania that can tow toys including a wakeboard, a banana boat, and inner tubes. Silver Cloud also carries diving and snorkeling equipment, plus sea kayaks and paddleboards. It does not include a helicopter, but an aft-deck helipad is at the ready for passengers who bring their own.

VIP Access | During her ongoing circumnavigation of the globe, Exuma has cruised along the Pacific coast of Central America, making stops in Costa Rica and Panama’s San Blas and Las Perlas islands. This spring and summer, the 164-foot motor yacht—designed by architect Philippe Briand and built by Perini Navi’s Picchiotti division—will be available for charter in the South Pacific, where its 7.5-foot draft will allow it to nose into shallow coves inaccessible to most yachts of its size. A hovercraft and an amphibious vehicle (plus a pair of bicycles and a moped) facilitate land-based adventures, while 14- and 21-foot Castoldi tenders tow water toys that include wakeboards, skis, and inflatables. Exuma also comes with diving and snorkeling equipment, a Sea-Doo, and two Seabob personal diving watercraft.

Time Traveler | Launched more than 80 years ago and fully restored in 2005—with a stint in the U.S. Navy somewhere in between—the 233-foot Haida G is a classic yacht built for transatlantic travel. This old-school explorer boasts a maximum range of 5,000 nautical miles courtesy of a nearly 50,000-gallon fuel tank. Its extended range has enabled Haida G during previous trips to cruise along the Pacific coasts of Canada, the United States (including Alaska), and Japan. The boat’s classic styling harks back to the golden era of yachting, but Haida G features a host of amenities and toys befitting the modern adventurer. In addition to a dive compressor and six sets of scuba gear, the vessel carries 12 snorkeling setups, a banana boat, a wakeboard, water skis, deep-sea fishing equipment, a pair of WaveRunners, and 21- and 24-foot tenders.

Cruising Areas Baltic and Mediterranean seas in the summer; available for charter worldwide