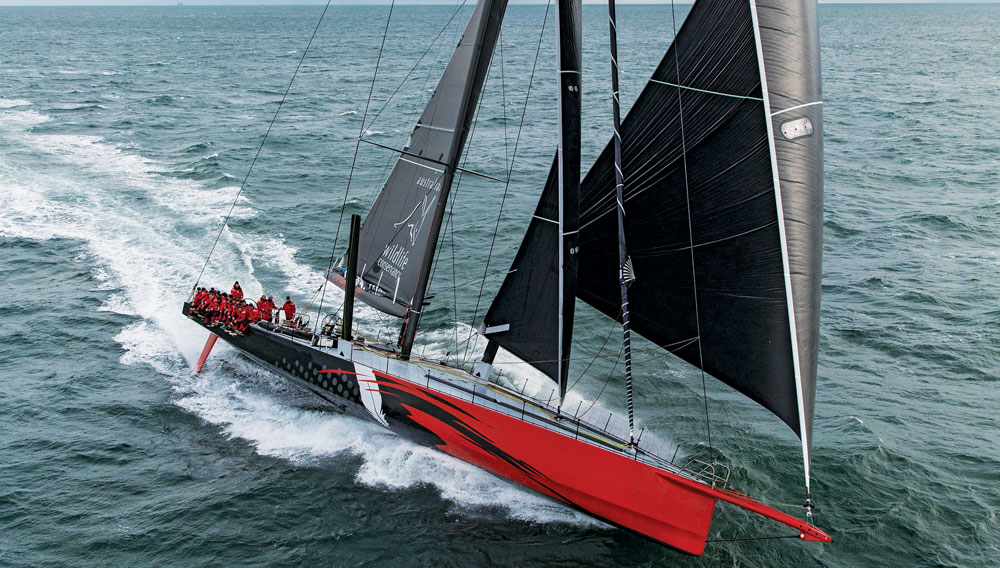 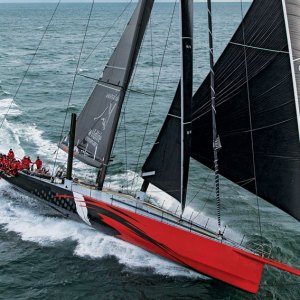 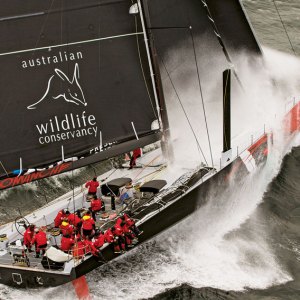 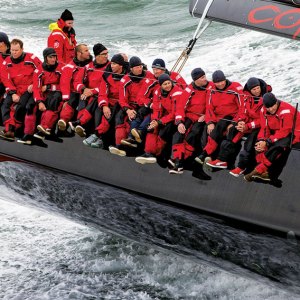 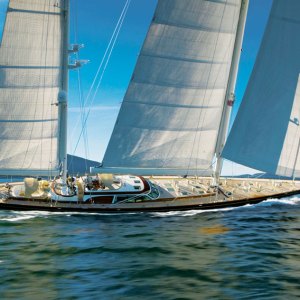 This summer, the captain and crew of Comanche will try to win the Transatlantic Race and establish the 100-foot vessel as the world’s fastest mono-hull sailing yacht. The event, part of the Atlantic Ocean Racing Series, will begin June 28 in Newport, R.I., and follow a 3,200-mile course to south Cornwall, England. The race has been run once before, in 2011, when Rambler 100, a New Zealand–built super maxi (90 feet or longer), crossed the finish line in 6 days, 22 hours, 8 minutes, and 2 seconds.

Comanche launched in October and two months later placed second in the Rolex Sydney Hobart Yacht Race, an annual contest that covers the sometimes treacherous 723-mile route between the Australian and New Zealand ports. The yacht is visually striking, with black sails and a black-and-red hull. With one of the largest carbon-fiber hulls of its kind, Comanche also represents the state of the art in hull-construction technology. The yacht is owned by Kristy Hinze-Clark and her husband, Jim Clark, the 71-year-old cofounder of Netscape, and it was designed by VPLP Design and Guillaume Verdier, two French firms that specialize in racing yachts. Comanche was built—remarkably in only about 13 months—by Hodgdon Yachts, a sixth-generation, family-owned company in East Boothbay, Maine, that three decades ago rejected technological advances in hull construction in favor of the traditional techniques and materials for which Maine boatbuilding is renowned.

“Comanche is a rocket ship,” says Tim Hodgdon, the company’s CEO. “The boat was designed to break records and win races, and under the right circumstances, it will be the fastest boat, far and away.”

Hodgdon’s second-floor office overlooks the Damariscotta River, not far from where the waterway empties into the North Atlantic. The walls are hung with photos of Comanche and other yachts that the company has completed in recent years. Many of the vessels—traditional sloops, ketches, and commuters, as well as modern-looking motor yachts built for the Office of Naval Research and Special Forces—feature hulls made of advanced composites. Cutting-edge construction has been the boatyard’s focus since Tim Hodgdon took the helm.

The Hodgdon family has operated a boatbuilding business in Maine for almost 200 years. It has undergone numerous name and specialty changes during that time, but it is still recognized as the oldest continuously operating boatyard in the United States. When Tim Hodgdon joined the company as a full-time employee in 1979, his father, George “Sonny” Hodgdon, was in charge. Sonny had operated a different boatbuilding business a decade earlier that produced its own designs and yachts for Alden and Herreshoff. As the 1970s approached, fiberglass construction was becoming popular, but Sonny did not want to work with that material, and he wanted to operate a smaller business. So he sold the company and established a new one, G.I. Hodgdon Co., which built traditional plank-on-frame lobster boats.

When Tim Hodgdon bought the company from his father in 1984, he changed the name to Hodgdon Yachts and moved away from lobster boats altogether. “My vision of where the company needed to go, it was something more sophisticated,” he says.

Over the next 15 or so years, the company worked regularly with the naval architect and designer Bruce King, whom Hodgdon describes as “the grandfather of modern classics.” Through those collaborations, Hodgdon Yachts built a number of large sailing vessels, including the 124-foot Antonisa, which launched in 1999, and the 154-foot Scheherazade (now Asolare), which launched in 2003. Each of these yachts featured King’s signature style of pairing classic-looking exteriors and interiors with state-of-the-art construction.

Halfway through the construction of Scheherazade, Hodgdon began to diversify the company. First he launched a defense-composites division, then he added three more divisions: One builds custom tenders, another designs yacht interiors, and the third provides yacht maintenance and repair services. Perhaps most significantly, Hodgdon has focused the company on using advanced composites—carbon fiber, Kevlar, and foam-core Nomex—to build exceptionally fast motor yachts and sailing yachts.

The company has built two advanced-composite, high-performance motor yachts in recent years, but nondisclosure agreements prevent it from discussing those projects. Comanche, which reached speeds of 32 knots during the Sydney-to-Hobart race, is a high-profile showcase of Hodgdon Yachts’ capabilities.

The construction method used to build Comanche is known as pre-preg, which is short for pre-impregnated composite fibers. It is a complex and delicate process that involves heating the carbon-fiber material that forms the hull to about 200 degrees Fahrenheit. To build the yacht, the company had to invest heavily in its own facilities. The boatyard’s main bay, which was built in 2001 and measures 160 feet long, 50 feet wide, and 49 feet high, was outfitted with numerous ovens that are instrumental in the construction process. The largest oven is 110 feet long, 36.5 feet wide, and 20 feet tall and is equipped with multiple propane heaters that can produce more than 1.5 million Btu.

The use of carbon fiber is not limited to Comanche’s hull. “Every sail is carbon fiber. Everything you see above the deck is carbon fiber,” says Comanche’s racing skipper, Ken Read, a two-time United States Rolex Yachtsman of the Year and the president of the sail-making company North Sails Group. “It’s far more like a racecar than you would ever imagine. The shapes and sizes and tolerances that these builders are building to now—it’s nothing shy of unbelievable.”

Hodgdon notes that Comanche’s ability to fly across the water is not a function of construction materials alone. “Just because you build something out of an advanced composite doesn’t mean it’s going to be light if you don’t engineer it properly,” he says. “It’s not going to be lightweight if you build it out of carbon fiber and it’s not optimized.” Much of Comanche’s hull is said to be constructed from composite materials with a honeycomb core, enabling the hull to remain strong while further reducing its weight. Throughout the yacht, Hodgdon’s team and the yacht’s designers used the minimum amount of material needed to keep Comanche structurally sound. The yacht also benefits from a canting keel, which can be swung to the windward side to counteract the heeling force of the sail. And Comanche is unusually wide—twice as wide as many of its super-maxi competitors. The width can be a problem in light winds—which slowed Comanche during the Sydney-to-Hobart race—but it provides stability in moderate to heavy winds.

Just as light winds can hinder a sailing yacht’s progress, it would seem that a region’s association with traditional designs and traditional building techniques could be an impediment for a cutting-edge company that is based there. That is not necessarily so, says Hodgdon Yachts’ chief financial officer, Don O’Grady. “We’re proud of the tradition of building boats in Maine. It’s been going on for hundreds of years, and people still value that quality,” he says. “But we’re offering a different perspective on what that means.”