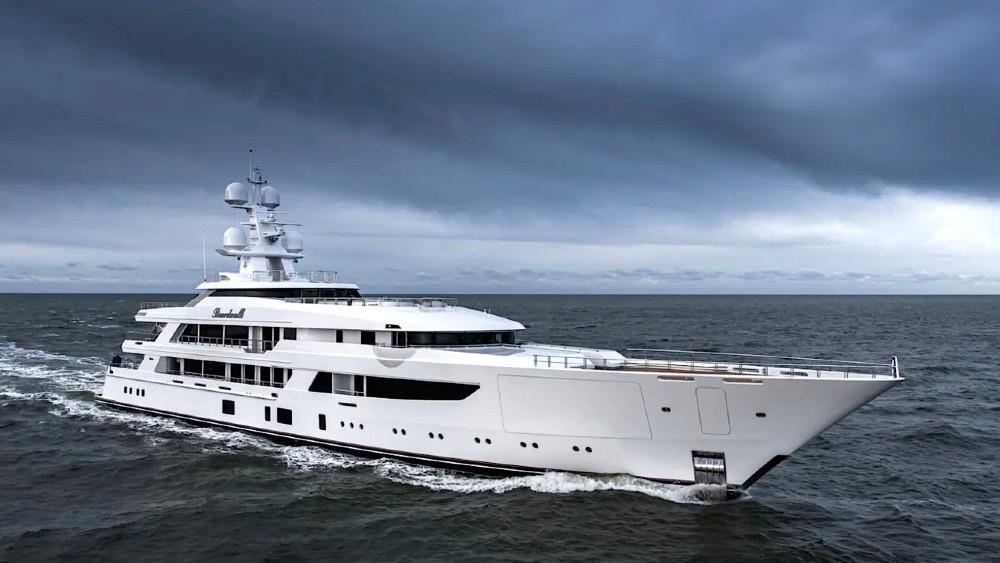 At the end of February, Houston billionaire Tilman Fertitta and his family held an annual Mardi Gras celebration, which they call the San Luis Salute. The event, which included local officials and celebrities, was headlined by the band Maroon 5. But the most visible VIP guest at the gala was Fertitta’s majestic new superyacht, Boardwalk.

The 252-foot Feadship is indeed a showstopper. It was the largest vessel at the Fort Lauderdale International Boat Show, and hundreds of people walking the docks took selfies against Boardwalk’s towering stern, with a H130 helicopter perched on the top deck. Fertitta and his family enjoyed the show from the comfort of the yacht—from the main-deck’s rear cockpit lounge to be precise.

It’s Fertitta’s favorite spot on his new yacht, a sanctuary protected from the wind and sun, but still exposed to the ocean. It’s also a microcosm of Boardwalk’s very intricate design. The stern has the requisite lounges, bar and large flat-screen television, but that’s where it differs from other yachts. The ceiling has delicate curves, there are many lights embedded into the area above the bar, and the trim on the columns supporting the stern’s overhang is highly stylized.

“I don’t think any other owner pays as much attention to the details,” Fertitta told Robb Report during a visit to the yacht. “If you look at the bigger yachts, they really don’t vary much with standard features like ceilings and lighting.”

“Tilman came in with all the important details—all the details that really make the difference in this boat,” adds Amy Halffman, who worked closely with Fertitta on the design. “He’s an extreme detail man, down to the quarter of an inch.”

The Houston entrepreneur has made a highly successful career out of paying attention to the details. Named by Forbes as the “World’s Wealthiest Restaurateur,” the chairman of Fertitta Entertainment and chairman of Landry’s has an empire that also includes the Houston Rockets NBA team, multiple restaurants, Bentley and Rolls-Royce dealerships, and five-star hotels.

The contrast of the black stairwell with the white floors is dramatic, nicely offset by the custom stainless-steel inlays along the railings.  Courtesy Fertitta Entertainment

Fertitta’s Post Oak Hotel in Houston, in fact, provided inspiration for Boardwalk. “We spent a lot of time meeting at the hotel,” says Halffman. “He had a lot of input into that design, which is classy and elegant, so we decided to reflect that style on the yacht.”

This Feadship is actually Halffman’s fifth yacht project with Fertitta, the other four Boardwalks being a succession of ever-larger Westports, the most recent being 165 feet in length. After owning it for 12 years, “it felt like time for a larger project,” says Fertitta. “One that was more complex and elaborate.”

While upsizing by almost 100 feet sounds like a simple hull stretch, the Feadship has 1,848 gross tonnes of interior volume, compared to 492 on the last Westport—in other words, the latest Boardwalk has nearly four times as much interior as the last one. That makes not only for a very complicated build—something which bespoke builder Feadship is used to—but also a new mindset for the interior design, which the design team needed to wrap their heads around.

Halffman and design partner Frank Woll came up with the concept about four years ago, and then worked closely with the owner on the yacht’s many features. There are hundreds of features, seen and unseen, that distinguish the interior.

The most noticeable—arresting, in fact—is a whimsical, fantasy-like sculpture of a bronze female form with a dress of flowing crystals, diamonds and pearls. The work by Estella Fransbergen is strategically placed in the main entry. “She’s like a guardian angel,” says the sculptor, noting it took nearly two years to complete. “She was originally going to be placed by the staircase, but we moved her so she greets everyone.”

“I’d seen Estella’s work years ago and admired it,” says Halffman. “The torso of the woman’s body appealed to everyone and proved to be a launchpad for me. It played off all the other features.” They include an enormous crystal in the main foyer, pendant chandeliers in the formal dining area beside a case with crystal wear, and bespoke crystal light fixtures on the nearby stairway—which also has a beautiful stainless railing that resembles a feature from the last Boardwalk, but on a much grander scale.

The designers looked for striking but elegant stones—a white opal for the salon and an onice grigio for the sky lounge—mixed with Sapele, mahogany and other dark-stained woods that show contrast with the light-colored fabrics and tiling. The wine cellar even has a custom stainless-steel design that gives it a distinctive look. In all, 55 stones, marbles and tiles were used across the yacht.

Of course, all these stunning details were made possible by the ubiquitous placement of lighting, both direct and indirect, something that Fertitta understands with almost a scientific precision. His previous Westport had four times more lights than the yard had ever put on the 164-foot series. This Feadship paid even more attention to the lighting. Even the beach club, with its lounge and dedicated dive and watersports locker, has a stylish, deliberate look. The bar has a light fixture comprised of Swarovski crystals.

The yacht, though immense, is easy to navigate. Fertitta and longtime captain Tristan Judson paid attention to the functional aspects, creating an open foredeck where the two Hogdon-built tenders are stored, adding the ability to use the massive area for social occasions. The sundeck has a mosaic-tiled swimming pool, and above that is an observation deck with a mast. On that level, one gets a sense of how large Boardwalk really is, surrounded by smaller superyachts at the Fort Lauderdale show.

The intricate details on the day head—typically a forgotten space—give a sense of the how the design team approached the interior.  Courtesy Fertitta Entertainment

Still, the owner and his designers managed to keep a sense of intimacy throughout, installing what they call a “country kitchen” as the owner’s galley, to allow more informal meals and socializing than the main dining room, while retaining the yacht’s professional galley for the staff on another deck. Fertitta, who often works on board, has an office dressed with light-colored fabrics, lounges and glass doors to access the exterior decks.

The Feadship may not be Fertitta’s last yacht. Rumor has it that he’s talking to European yards about an even larger Boardwalk. When asked about it, he says simply: “I love to build things.”