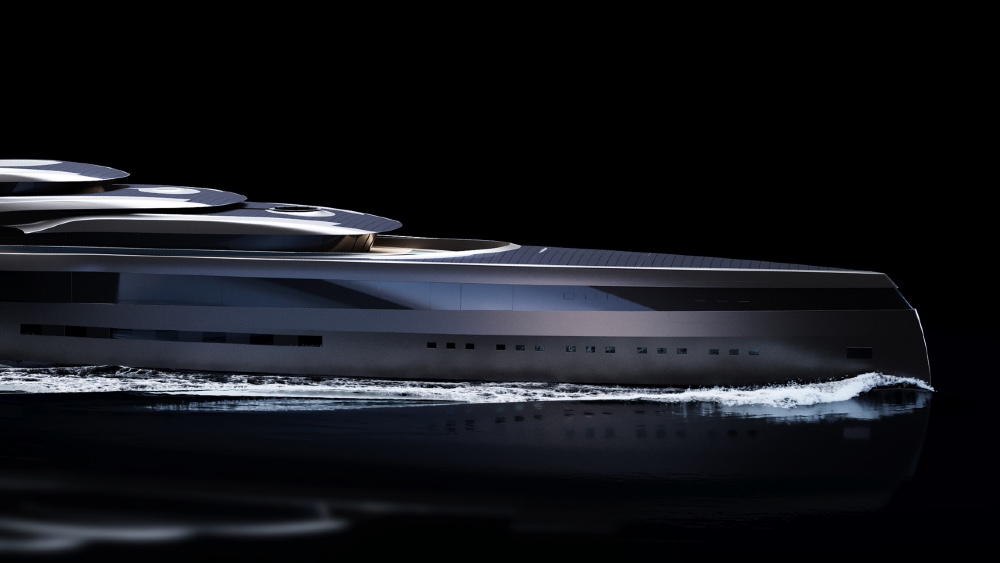 Few yachts are designed with an eco-conscious rock star in mind, but that’s exactly how Feadship’s revolutionary concept “Escape” came to be. At 361 feet in length, and carrying both a submarine and myCopter craft, the design places autonomous exploration at the top of the agenda. If Sting was in the market for a Feadship, Escape would be it.

It all began in 2014 when Feadship’s senior designer Ruud Bakker and his team invited a bunch of brokers to sit down and dream up their perfect custom yacht. At the heart of their proposition was an imaginary extrovert client with green fingers and a love of the planet. Over the course of three days curvaceous lines began to take shape and Escape emerged from the drawing boards. But far from fairytale sketches, it’s a serious design underpinned by viable naval architecture.

The most radical, eye-catching feature is the atrium in the center of the yacht that includes a wellness area and a moon pool with seawater. It also doubles as an elevator shaft. The glass surround elevator descends to the bottom of the moon pool and serves as an underwater observation pod in place of a traditional owner’s lounge.

Different features like 7,500 square feet of solar panels, a greenery and hybrid propulsion could be game-changers for the superyacht segment.  Courtesy Feadship

“The elevator gives guests a 360-degree view with fish swimming all around,” Bakker told Robb Report, “so you can imagine that when you switch on the lights you attract all the marine life and it’s as though you’re standing in the middle of a fish tank.”

The moon pool is also a submarine landing zone for exploration below depths, while a giant slide for inter-deck splashes will keep the kids happy. But the clear aim of the atrium, aside from its Bond-like gadgetry, is to test the limitations of yacht design.

“These blue-sky days with brokers help us to keep pushing the boundaries and to offer the things that others say no to,” says Bakker. “We say yes, and I think that’s what sets us apart from any other shipyard.”

The Moon Pool, which has a glass bottom and runs through the center of the hull, is a design that Escape’s naval architects wanted to prove would be feasible.  Courtesy Feadship

The green innovations include an enthalpy wheel to pre-cool the AC intake with exhaust air, and the reheating of AC air with waste heat from the generators. Escape also has the same hybrid propulsion package found on Feadship’s Savannah. These all mount up to a 35 percent reduction in fuel consumption, along with the option for silent electric cruising. Feadship is so serious about pushing electric propulsion that it recently announced it will offer the package to owners at cost.

“We only do electric propulsion now; owners don’t get anything else. And if you don’t want to pay for it then you get it at cost,” he says. “It’s a bold decision by us, but sustainability needs to start somewhere.”

Around 7,500 square feet of solar panels cover the yacht, including a rotating deck hatch that tracks the sun’s rays throughout the day, generating an estimated 133 kW of energy. An abundance of greenery is also included, from the full-height tree in the sky lounge to an herb and vegetable “greenhouse.”

The Zen-like feel of the sky lounge includes a full-sized tree for an owner with a green thumb.  Courtesy Feadship

The use of nature within Feadship’s recent concepts is becoming a common theme, as shown on its superyacht concept “Freedom.” Designed in collaboration with Italian studio FM Architettura, the idea behind the garden suites and holistic garden area is to extend the connection with the outdoors.

“We mixed many elements here, blending nature’s habitat into the design, using skylights, gardens, water spaces, pools and more,” designer Francesca Muzio told Robb Report. “The holistic garden is a perfect and particular space to switch off, recharge and repair both body and soul.”

Now, the concepts just need a rock-star like Sting to become the next owner.