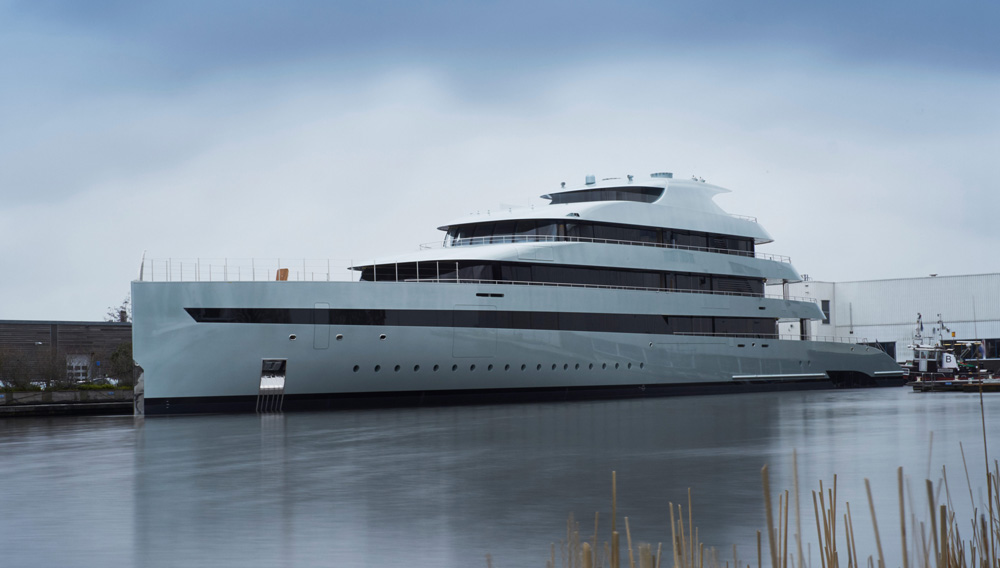 The 274-foot Feadship-built yacht Savannah could set a new superyacht standard for fuel efficiency, not to mention intrepid design. While many superyachts claim to be eco-friendly, Savannah features a design that is truly groundbreaking, both it terms of naval architecture and propulsion.

The yacht’s unmistakable profile, including its knife-edged vertical bow and so-called “floating superstructure,” promises to be a head-turner anywhere it travels. Savannah’s dramatic topside design is complemented by an innovative propulsion system that can deliver 30-percent better fuel economy than more conventional engine systems. The new system was inspired by Breathe, a future concept that Feadship designed in 2010 to show how bespoke superyachts can be cleaner and more cost effective. Savannah’s propulsion system marries a single diesel engine to three generators, banks of lithium-ion batteries, a jumbo propeller, and an azimuth stern thruster, which can rotate in any direction to make light work of tight-quarters maneuvering. Instead of two higher-rpm diesels used on many traditional yachts, Feadship uses a single, medium-speed Wärtsilä main engine with one propeller on the centerline. The counter-rotating stern thruster just behind the main engine delivers extra efficiency for the propeller, which is 40-percent larger than conventional propellers.

The lithium-ion batteries, rated at 1 million watts, also deliver an edge on performance. “These provide extra speed at the top end, allow proper loading of the generators at any speed and facilitate super-quiet cruising at slow speeds without any engines turning,” says Henk de Vries, Feadship’s director. The yacht can operate in diesel, electric, or hybrid modes.

Beyond the yacht’s technical prowess are many aesthetic innovations like the floating superstructure. CG Design and Feadship created this complicated design, using polished stainless-steel strips, aluminum supports, and teak, to make it appear as if Savannah’s upper decks are floating above the hull. The yacht’s exterior is painted from stem to stern in a metallic green—all the way down to the deck furniture and outdoor ceilings—perhaps to underscore the vessel’s green hybrid propulsion system. Feadship developed a special paint process to make sure the metallic cover had no color discrepancies. Only the radomes, jet-black exterior staircases, and teak steps are not painted in sea-foam green.

Savannah offers several jaw-dropping amenities. An underwater lounge inside the hull includes a thick glass wall where guests can watch fish outside the yacht or watch swimmers in the 30-foot pool. The lounge also converts to a cinema. Accommodations include the owner’s palatial suite, a VIP stateroom with balcony, and four large guest staterooms. The designers also included generous accommodations for as many as 26 crew members.

De Vries says that more than 1,000 people were involved with Savannah’s creation after the contract was signed in 2011. Savannah’s owner will occasionally offer the yacht for charter. (feadship.nl)