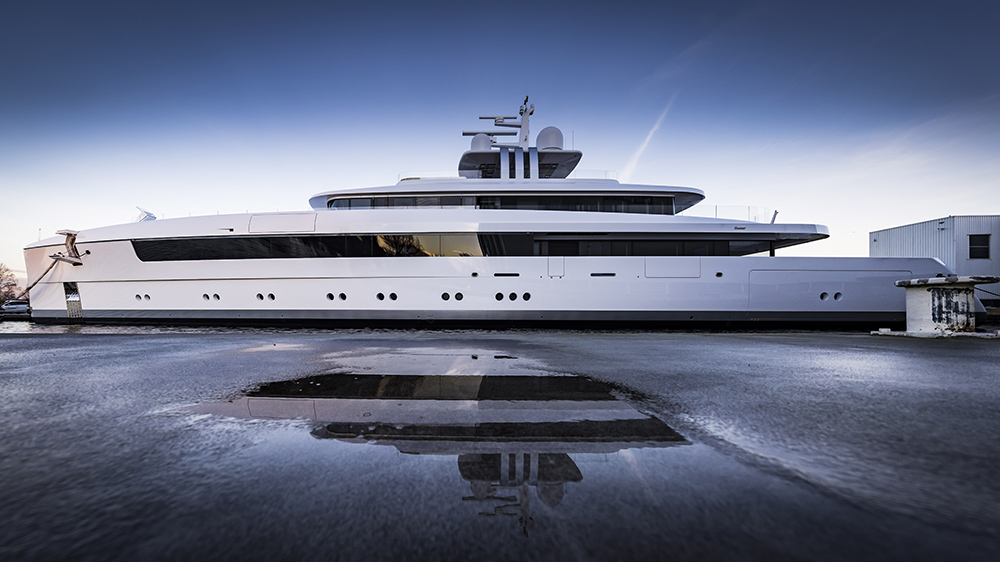 One of the world’s most famous drawings, Leonardo da Vinci’s Vitruvian Man, correlates the ideal proportions of a human body with geometry as described by the ancient Roman architect Vitruvius. The architect saw the human figure as the primary source of proportions for classical architecture.

In a similar way, the 190-foot Najiba, the fifth of Philippe Briand’s Vitruvius series, was designed with graceful proportions, serving as a floating connector between science and art. Recently launched at the Feadship De Vries’s yard in the Netherlands, the yacht’s minimalist lines create a simple, elegant profile, while the running surface provides excellent seakeeping qualities.

The main deck has a long midsection of glass extending up toward the foredeck, with an open area aft for entertainment. The upper deck has a second saloon in the center, with an open sundeck above. The yacht is noteworthy, too, because it’s the second-largest aluminum vessel built by De Vries.

The owners were attracted to the bespoke nature of the project, working closely with the yard and Briand’s studio in London. Beyond its long, lithe profile, the yacht is ultraefficient, able to bring fuel consumption down to just 2.9 gallons per nautical mile at a cruising speed of 12 knots. That’s unheard of for a superyacht this size but also explains its range of 4,400 nautical miles.

Briand, who helped launch the Water Revolution Foundation via the United Nations last November, has been a leading proponent of sustainability in the superyacht field. The nonprofit foundation is focused on enhancing ways of lessening yachts’ carbon footprint.

Najiba’s interior by Studio Liaigre includes hardwoods that are juxtaposed against clean white surfaces to give the sense of really being in a beachside villa. Liaigre’s Guillaume Rolland spent time with the owners to craft a lifestyle interior, rather than just throw together designer decor to create an impression.

Najiba has a generous master stateroom and large VIP suite for the owners’ party, along with four staterooms for eight other guests. The yacht also has quarters for the 14 crew members.