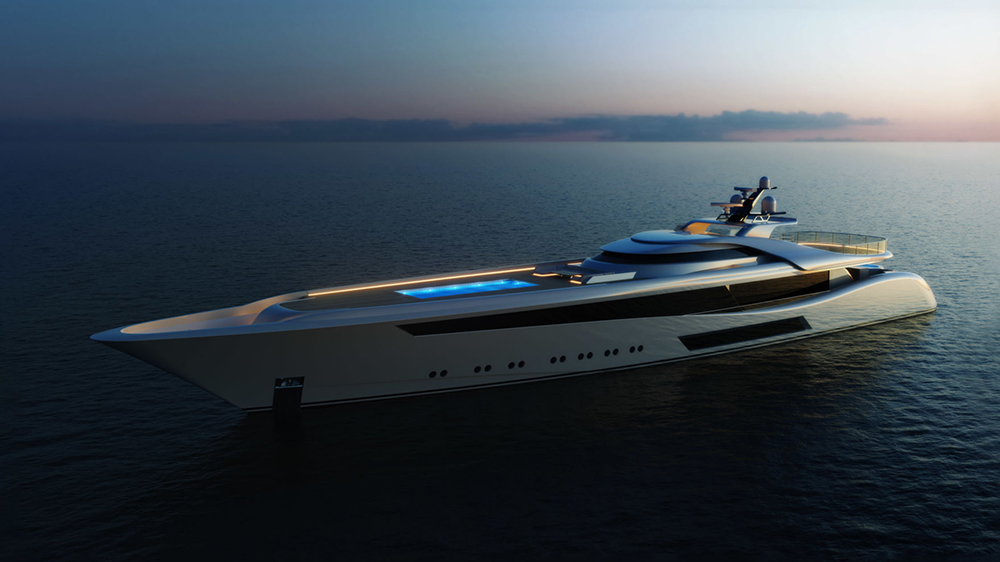 What happens when you let a self-confessed “car fanatic” design a megayacht? Feadship wants to show you. The Dutch yard has just unveiled a “sleek, speedy and state-of-the-art” concept that was inspired by the curves of a Jaguar E-Type.

The 207-footer, known as Project 3073, was the star of the third episode of Feadship Unveils, a YouTube series in which the Dutch yard deep-dives into custom creations that never actually hit the water. Not yet, at least.

Feadship’s chief executive Henk de Vries (the aforementioned petrolhead) and head of design Tanno Weeda are the two masterminds behind the concept and the co-hosts of the episode. The pair said Project 3073 was initially designed for a well-versed client with two Mangusta superyachts to their name. The exacting seafarer tasked Feadship with creating “something sleek and sporty and elegant.” To be sure, the yard delivered.

The all-aluminum sports yacht sports elegant lines and a long bow section that de Vries says was inspired by the bonnet of an E-Type. She’s designed to run like a sports car, too. The “exceptionally fast” Project 3073 is fitted with an innovative propulsion system that deploys water jets rather than propellers to give more grunt. This means the shallow-draught yacht could comfortably hit speeds of around 30 knots. Feadship also says an ultra-efficient electric equivalent would be able to race along at 20-plus knots.

Onboard, Project 3073 features an open bridge deck wheelhouse that connects to the main deck saloon to give a sense of flow. The real pièce de résistance, however, is the full-sized glass-bottomed pool, which Weeda deemed “one of the most interesting parts of the yacht.” This sits above the owner’s stateroom “to create a spectacular and constantly evolving ambiance,” according to the yard.

The series, which previously covered a superyacht inspired by Forest Gump and Freddie Mercury, highlights the many facets of the custom creation process and shows what is possible when designers are given complete carte blanche. Feadship, can you take on the F-Type next?

You can watch the Feadship Unveils episode below: