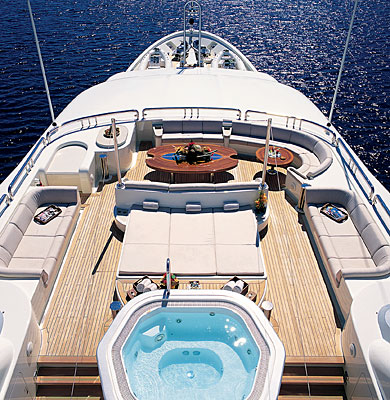 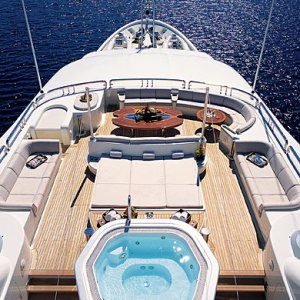 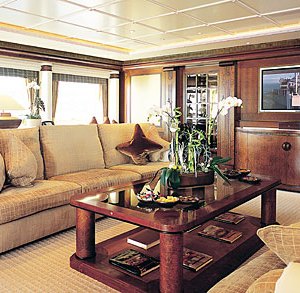 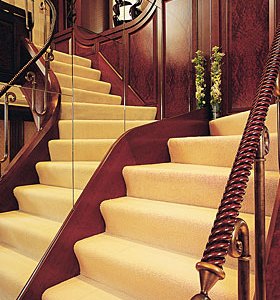 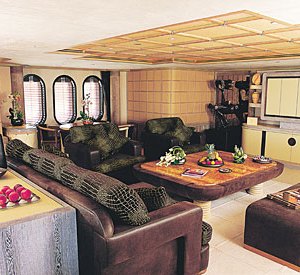 For eight months, craftsmen working on Solemar, a 202-foot Amels yacht, hammered and sawed and welded at a heart-pounding pace. Then on June 12, 2003, a Thursday, their frenzied efforts turned frantic as they tried to beat their deadline and enable the ship to begin its maiden voyage from Amels’ Vlissingen boatyard in the Netherlands to the South of France that day, a day earlier than scheduled. “It’s a very unlucky thing to do,” Mick Leach, the boat’s designer, says of making a maiden voyage on the 13th day of a month, especially when it falls on a Friday. “It was manic, as you can imagine.”

Just before midnight, subcontractors completed their labor and lawyers approved the contracts, allowing Solemar to weigh anchor and Leach to believe that his luck, having turned from good to bad to good again, would be sustained.

Solemar, a 12-passenger vessel now owned by a group of Russians, originally belonged to an American who several years earlier had commissioned Leach and Amels to design and build the megayacht. However, after September 11, 2001, when the vessel was only halfway finished, the owner put the Dutch yacht back on the market for financial reasons. “I was horrified,” says Leach.

The designer understood his client’s decision but feared the ramifications for his firm. The boat, which the owner had planned to use as a second home, was Leach’s first solo project and would serve as the flagship of his portfolio. While his unfinished project was vexing Leach, Capt. Andrew Clarke, who would become Solemar’s skipper, was chatting with the Russians about a custom yacht. They had cruised aboard charter yachts captained by Clarke for five years and were ready to own their first vessel—but not prepared to wait for a new build to be completed. Clarke and his clients scouted several shipyards before finding the half-built Amels, and after determining that it would take less than a year to deliver the boat, the owners purchased the vessel.

This timeline, however, hinged upon the owners’ acceptance of the yacht’s basic structure. Had they gutted the interior or divided the master suite into a pair of smaller staterooms, the delivery date would have been extended significantly, and the price would have risen sharply. “You could take the whole interior out and start again if you wish, but you put a year on the project,” Leach says. “It could have been done, but the costs would have been astronomical to achieve that. Absolutely astronomical.”

To keep the project on schedule, the owners requested changes to the interior’s surface treatments only, and although the alterations were not major, Solemar’s did become the second-most expensive interior built by Amels. While the new owners did not care for the yacht’s dark woods, they had Leach brighten the interior by adding carpets, fabrics, and contemporary sculptures and furniture, much of which is either cream-colored or off-white. But even these subtle modifications tested the patience of the owners. “Even though the boat was that complete, they wanted everything now,” Clarke says of his clients. “To make changes takes time because everything is custom built by specialists. A hinge on the boat has to be handmade. Furniture is handmade. The money side was not a problem, but making changes was—because they did not have a complete grasp of the time it takes.”

The Russians did insist on one major change. They are young men who share with Clarke an affection for water sports; during their charters, they spent much of their time windsurfing and riding Jet Skis and WaveRunners. Under the original design, the workout equipment would have had to be placed on the top deck instead of below in an exercise area, because one of the owners is 6-foot-9-inches tall. While running on a treadmill belowdecks, he would have had to wear a helmet to protect his head from the low ceiling. Leach agreed that the plans needed to be altered. “It was looking ugly among the beautiful barbecue equipment,” Leach says of the treadmill. “I was very reluctant to put that blob on top of the sundeck.”Instead, Leach designed an enclosed air-conditioned gym on the sundeck. He was concerned that the yacht’s profile would be marred by the late addition and that some of the boat’s technical systems might have to be repositioned, but he designed a simple enclosure with floor-to-ceiling glazed windows and doors and a silver roof to house weights and aerobic equipment. The gym also forms a wind barrier for the top level of the boat, enabling the owners and their guests to enjoy the sundeck without fear of losing their napkins and tablecloths to the sea. According to Clarke, the gym added $1 million to the project’s cost.

Eight months after work on the project resumed, Solemar was completed. The yacht spent its first summer in the Mediterranean and is available for charter in the Caribbean for $375,000 per week through Nigel Burgess, a charter and management firm. Leach says that he is happy Solemar’s new owners are pleased with their boat, but for selfish reasons, he still wishes the original owner had been able to follow through on his plans. Having spent much time with the owner and his family while designing the boat, Leach was promised generous use of Solemaronce it was completed. “I don’t get to see it much now,” Leach says. “That’s my only regret.”