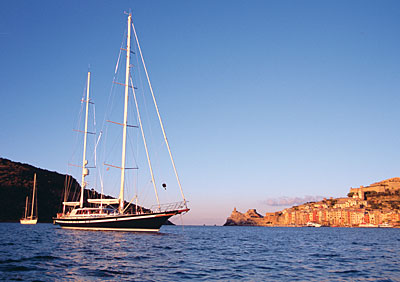 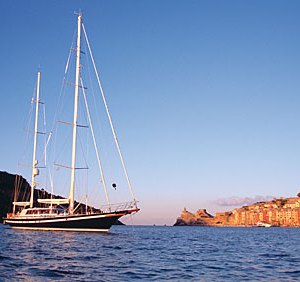 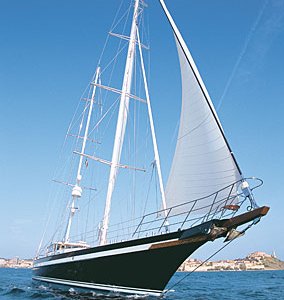 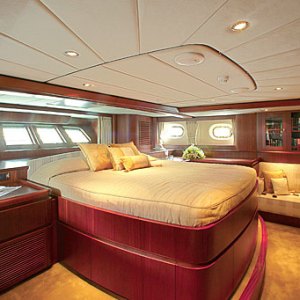 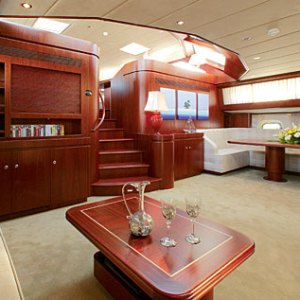 The early-fall sun rises over Portovenere, a small town south of La Spezia on Italy’s western coast, and reflections of red, pink, and yellow buildings reach across the water and up the dark blue hull of Infatuation, a 136-foot sailing yacht anchored just offshore. The setting alone could be enough to validate one’s decision to become a boat owner, but Ricky Maskell, the proprietor of Infatuation, is anxious to move on.

Most of Portovenere remains in slumber, except for the crews of the small fishing trawlers that chug out to the Ligurian Sea and the guests aboard Infatuation. Lingering over breakfast in the split-level saloon, where the aroma of fresh coffee blends with the scent of new wood, they extend their mugs for stewardess Madeleine Johnson to top off.

Maskell’s wife, Cathy, is with their guests, but Ricky, a 62-year-old British businessman, having checked the navigation charts with Capt. Graham Newton, is busy firing up the 650 hp MTU engine. As the boat begins to move, Maskell, eager to raise the sails and let Infatuationheel over, clambers down from the outside helm and pokes his head into the saloon. “If everyone could finish breakfast straightaway,” he says, sounding cheerful and excited, not annoyed, “we can get on with it.”

Maskell commissioned Infatuation, which was delivered last June by the Dutch boatbuilder Jongert, primarily because he wanted to sail to parts of the world he had yet to see in a vessel larger than the ones he had owned previously. Infatuation is not a racer—when the 190-ton yacht reached 16 mph, it was cause for celebration—but it is comfortable and elegant. He and his wife spent their first summer on the yacht cruising along the coast of Croatia, where Infatuation was among a handful of other yachts available for charter. For now, Maskell is making his vessel available in popular locations in the Caribbean and Mediterranean during peak charter seasons, and he sails the boat in those regions himself as often as possible between bookings, though he would rather take it elsewhere.

Maskell acknowledges the beauty of the familiar Mediterranean haunts, but he and his wife have cruised that region for many years. “It gets boring there,” says Maskell. “I want to see new ports.” His wife dreams of sailing past the Statue of Liberty in New York Harbor, while he wants to take Infatuationto Istanbul and the Black Sea. “But it’s a bit of a gamble, isn’t it?” he says with a sigh. “You never know if the charterers will want to go where I want to go.”

The Maskells themselves never have been guests aboard a charter yacht—mostly because, Ricky says, he would want to keep the boat when the cruise ended—and he did not acquire Infatuation so that he could become a charter host. But as he learned with his previous yacht, a 100-foot Jongert, by offering his boat for eight to 12 weeks of charter each year, he transforms it from a personal extravagance into a small business entity in the eyes of the British government. “It keeps the tax man off my back,” Maskell says.

Infatuation is therefore available for $70,000 per week through Nigel Burgess, a charter marketing and management firm. This late-season, four-day, 120-mile run from Genoa to Elba, an island between Corsica and the Italian mainland, is Maskell’s way of introducing the yacht and one possible charter itinerary to a handful of charter brokers. They discover that though Maskell initially may have been reluctant to make Infatuation available for chartering, he has molded it into one of the most attractive sailing yachts on the market.The fourth yacht in Jongert’s 40 T series, Infatuation features a retractable keel that reduces the vessel’s draft from more than 16 feet to 9 feet for entry into shallower bays. Each of the four staterooms has en suite bath facilities, and expansive transom windows allow natural light to flood the master stateroom. With its high ceiling, the saloon, Infatuation’s centerpiece, welcomes guests taller than 6 feet. “If you’re doing a long crossing in bad weather, you can be in here [the saloon],” Maskell says. “You can drive, you can look out—do anything you want in comfort. In the heat, you can put the air-con on in here and look out the windows.” Maskell also wired the boat for Internet access and purchased a Jet Ski for guests to use.

It took Jongert’s designers and craftsmen 22 months to complete Infatuation, and nearly as long for Maskell to find a suitable captain. He rejected a number of applicants who indicated that they would do all of the sailing, which is the last thing Maskell expects from a captain. “I don’t want a skipper who says, ‘Here, have a gin and tonic and go sit over there,’ ” Maskell says. “I’m involved.”

Maskell had operated each of his previous boats, learning the basics aboard his Halberg Rassy 41 and Trintella 68, mastering the art of sailing with his Oyster 80, and cruising in comfort aboard his 100-foot Jongert. Aboard his Oyster, he pieced together a series of trips that ultimately took him more than halfway around the world, from the Mediterranean to the Caribbean, through the Panama Canal, to French Polynesia, and then back through the canal and across the Atlantic to Essex, England, his home port.

In Graham Newton, a 27-year-old Englishman who had crewed aboard Victoria of Strathearn, a 130-foot vessel constructed by Alloy Yachts of New Zealand, Maskell found a captain who recognized that his boss is a hands-on sailor who enjoys tying knots and finessing sails. Maskell quickly warmed to him and to Newton’s girlfriend, Catharine Thomas, who would become the yacht’s chef. Hiring a chef had been just as difficult for Maskell as finding a captain; one candidate, who was trained in haute cuisine, was fired his first day on the job because he could not or would not make a favorite meal of Maskell’s, a heaping plate of bangers and mash. Thomas is more versatile and more flexible. She often prepares simple dishes for Maskell while creating exotic presentations for his guests. “I think she suffers me,” Maskell says with a smile.

Recognizing that charter clients can be exacting, Thomas checks with each one before preparing the day’s meals in case his or her preferences have changed from those that were indicated prior to the trip. “I find they have nothing to do with what people actually want,” says Thomas, whose specialties include Thai broth with prawns and lobster-mango salad. “Usually they write, ‘I’ll eat anything,’ but then they get aboard and say, ‘By the way, I don’t eat dairy’ or ‘I don’t like fish.’ ”

Just south of Livorno, while his wife and their guests applaud the dolphins frolicking in the boat’s wake, Maskell sits in Infatuation’s saloon pondering a brochure of Salperton, a 174-foot sailing yacht built by Alloy Yachts in New Zealand. “Look at her,” he says of the vessel. “You’ve got the whole cabin, a beautiful lounge. This is powerboat luxury. She’s got all the benefits but still looks like a proper sailboat.”

He glances around Infatuation’s interior, which has smaller but similar characteristics to Salperton’s. His boat’s high coachroof and wide seating areas allow as many as eight guests to spread out during meals or to find quiet spots for reading or napping. The master stateroom is spacious, but not so gargantuan that it leaves the three guest staterooms cramped. The cockpit is designed with low-profile doors and a large U-shaped seating area that makes first-time sailors feel secure when the boat is under way.

In Maskell’s opinion, Salperton offers even more comforts without compromising the boat’s profile; he especially likes the pop-up, tinted glass partitions that separate the boat’s saloon from the inside helm. “We are thinking that, if Jongert will build it, we can have a Salperton in four years’ time,” he says. While he admires Alloy’s work, the yard’s New Zealand location would make it difficult for Maskell to monitor the construction from his home in Essex. “She’s a bit more than I can afford now,” he says, “but in four years’ time….”

Maskell is again ready to move on. He closes the brochure and looks toward Infatuation’s cockpit. “Let’s get some sails up now.”