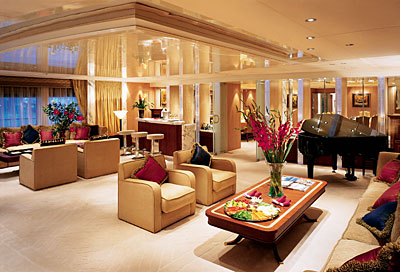 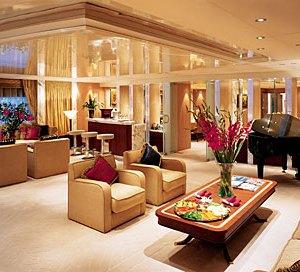 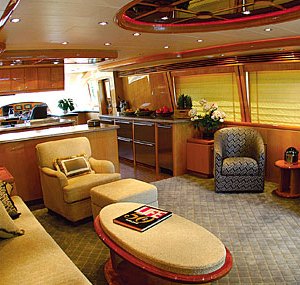 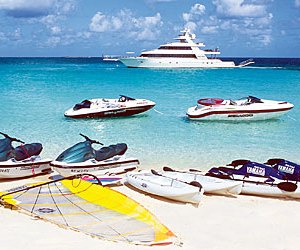 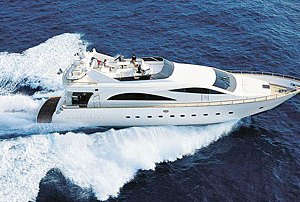 For Gary Epstein, the once-pleasurable pastime of boating aboard his 50-foot Hatteras and 39-foot Tiara sport cruiser had become an annoyance. His appointment book, which included the dates of upcoming cruises and family vacations, was also filling with deadlines for boat-related tasks—performing maintenance work, meeting with his crew, making sure his boats were housed correctly—that accumulated while he ran his electrical business. o In the fall of 2002, Epstein, a 45-year-old resident of Potomac, Md., found a way to eliminate these concerns.

While strolling the docks at the Fort Lauderdale International Boat Show, he met representatives of Monocle Management, a company that manages yachts for their owners. The Monocle reps explained that Epstein could avoid these inconveniences that inevitably accompany boat ownership by purchasing a share of a yacht in its new fractional program. Monocle would manage all those aspects of ownership that he loathed, and Epstein would own equity in the boat.

After selling his Hatteras and his Tiara, Epstein joined Monocle’s program and purchased a share in Vitesse, a 68-foot Hargrave, for four weeks of use per year for an indefinite period of time without any of the headaches he had experienced as a boat owner. “The situation allows me to enjoy the boat 100 percent of the time and not deal with any negative things,” says Epstein, who has cruised off the coast of Fort Lauderdale and around the Bahamas aboard the yacht, which has two spacious staterooms and a cruising speed of 22 mph. “Unless you’re using it more, I can’t imagine why anybody else would want to own a yacht.”

Loren Simkowitz, Monocle’s director of operations, says that, like Epstein, most of his program’s members could afford to purchase a yacht outright, but they could not spend enough time aboard their vessels to justify such acquisitions. “You use it only several weeks a year, so you don’t want to support an idle asset,” Simkowitz says. “All you’re creating is a playground for your crew. The boat is down in Antigua and the crew is having a good time, and you’re managing your factory in New York.”

Although it has yet to gain a foothold among boaters, fractional ownership has been a popular alternative to outright ownership for more than a decade in the private jet industry, where fliers can purchase shares that grant them 50 annual hours or more of air travel over a five-year period. The major providers own fleets of aircraft, but they are hampered by the sky-high costs of purchasing and maintaining the planes. No boating fractional provider has commissioned a fleet of vessels. Indeed, SeaChange, a fractional company established by the Monaco-based charter company Liveras Yachts, is unusual in that it owns the two yachts that it manages: Annaliesse and Alysia, 280-foot sister vessels.

According to Kyri Kyriacou, managing director of SeaChange, three of Annaliesse’s five shares (each of the $10.2 million shares entitles the owner to four weeks of use per year for as long as he owns the share) have been sold, while all five of Alysia’s shares are available. Alysia will enter service this spring, and like Annaliesse, it will be available for charter when not in use by its fractional owners. Time slots aboard the vessels are available on a first-come, first-served basis. “[Fractional ownership] has been tried in the past with smaller vessels, and one fundamental error was going to clients with a concept,” Kyriacou says. “[Fractional providers] have drawings and say to the clients, ‘We need deposits for this to work.’ This is totally the wrong way to do it. We were committed to building two boats, and we have the finances to build two boats.”

Monocle, in contrast, does not own the yachts in which it offers shares. As a yacht management company, it oversees approximately 45 vessels on behalf of their owners—hiring crews, scheduling maintenance, and repositioning the boats to the locations where they will next operate. When the yachts are not being used by their owners, most management companies will make the boats available for charter, helping owners to recoup some of their expenses. However, on behalf of the original owner, Monocle sells shares in some of the boats that it manages rather than offering them on the charter market. According to Marty Busekrus, the company’s regional sales manager, 12 of the Monocle-managed boats are fractionally owned, with approximately 50 members in the program, while the rest have individual owners. Each boat in the fractional program is established as a limited liability corporation owned jointly by the vessel’s shareholders. Like SeaChange clients, Monocle fractional owners can sell their shares back to the company or make them available to any buyers.To explain the concept further to prospective owners, Monocle presents a scenario involving a $2 million yacht. Under Monocle’s plan, a one-tenth share (which represents four weeks of annual use) would cost $200,000 (which goes to the boat’s original owner) plus $20,000 in annual operating expenses (which goes to Monocle). Based on current rates, Monocle suggests that to charter this boat, a client would pay approximately $25,000 per week or $100,000 for four weeks. “That’s rent. That’s money that’s gone,” says Busekrus. “In a fractional ownership scenario, you’re paying only $20,000 for the operating costs because you have $200,000 tied up in equity. When you sell, you get that money back, or close to it.”

However, this scenario assumes a favorable rate of depreciation of the yacht’s value, which can be a tenuous premise. In aviation, depressed residual values of fractional jet shares—mostly a result of aircraft supply exceeding demand—have prompted many private fliers to turn to alternatives such as 25-hour ownership programs. SeaChange’s Kyriacou notes that the scarcity of 280-foot megayachts should keep the value of Annaliesse and Alysia shares stable, while Monocle’s Simkowitz says his company’s maintenance program should prevent share values from depreciating significantly. Monocle withdraws the boats from service for 12 weeks each year for general repairs and upkeep. “The reason that the value of boats goes down is because people don’t take care of them,” Simkowitz says. “They don’t have the time to give them proper maintenance. They don’t have the funds to fix them as necessary, and things tend to deteriorate.”

Other Monocle owners make portions of their shares available for charter, but Epstein plans to use his boat for the full four weeks each year, and he is not concerned about the value of his Hargrave share decreasing. “I’m not expecting it to appreciate in value,” he says. “But based on previous experience, I’m not expecting to lose a whole lot, either. You’re sharing the depreciation with other owners. And because it’s set up as a corporation, there are tax benefits.”

Although Epstein never has met the other Vitesse shareholders, Busekrus says it is common for a vessel’s fractional owners to collaborate when establishing the schedules and cruising destinations of their yachts. While the owner holding the largest share has final say on major decisions such as where a boat will be located, shareholders can coordinate the dates of their desired trips to eliminate any conflicts. “It’s not like a time-share where you always get the second week in August,” Busekrus says. “We set it up so there’s a rotating schedule. You let us know when your favorite holidays are and what school schedules are, and we’ll try to accommodate you.”

Monocle shares are not limited to existing vessels. Westship, a Tampa, Fla., manufacturer, will build a yacht for Monocle if it can assemble a group of fractional owners and collect from them 70 percent of the boat’s price. Several would-be owners have expressed interest in purchasing a 140-foot Westship, which would cost approximately $20 million, but Monocle has yet to reach the 70 percent threshold. If Monocle does, Westship will begin the project (which will take about 18 months to complete) and allow Simkowitz’s team to sell the remaining 30 percent while the yacht is being built.

Monocle is confident that eventually enough owners will join its program to enable the company to order several new boats at a time from a manufacturer and get a discount on the multi-vessel order. This is the same business model employed by fractional aircraft programs, which purchase planes in bulk at a reduced rate and then sell the shares at market prices. “I can’t imagine this not being a huge thing in the yachting world,” says Epstein. “I think the reality is that most people, like myself, can’t use the thing 12 months out of the year. If you’re using a boat intermittently, like most people do, this is a win-win situation.”