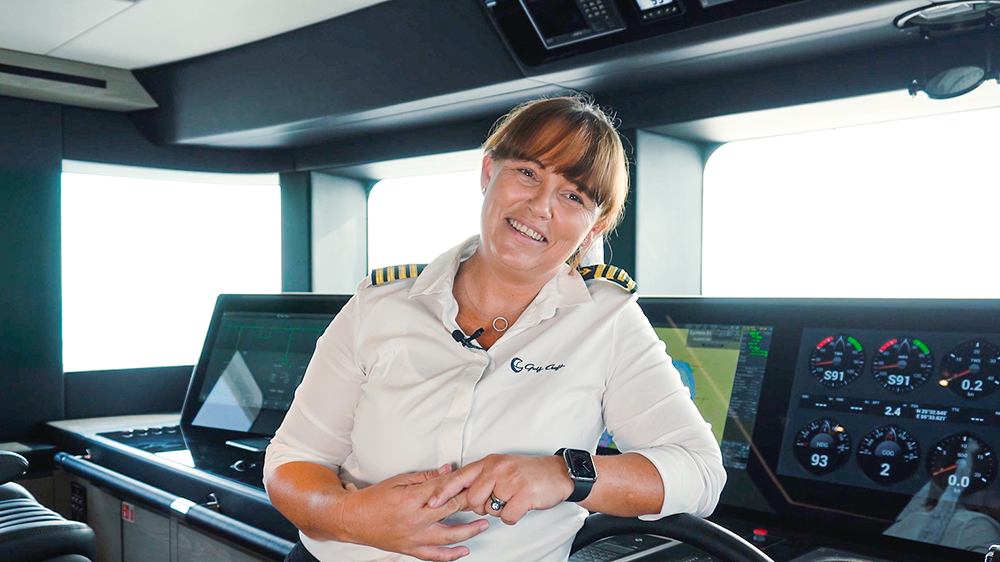 Love it or loathe it, one thing that hit reality show Below Deck has done for yachting is shine a light on one of the industry’s few female yacht captains. Fort Lauderdale native Captain Sandy Yawn had three decades of yachting under her belt before signing up to take the helm on Bravo’s season two. While women account for just 2 percent of yacht captains, her performance goes some way to smashing the glass ceiling in what is still considered by many to be a male-dominated field.

“If people watch the show, they see I learned every aspect of the boat and that I’m a team player,” Yawn told Robb Report. “I was groomed for the big boats, but it wasn’t an overnight success.”

Yawn started out as a boat washer in south Florida after answering an advert in the local paper. Not long after, the boat owner employed her full time and sent her to maritime school to get her captain’s license, covering the cost of her certifications and continued education.

“You don’t need to haul heavy lines across the deck to be a captain,” she says. “But you do need to know navigation, finance and maritime law, as well as how to lead a team and learn the power of the word ‘no’.”

Yawn’s entry into yachting is not typical, but organizations such as She of the Sea are making great strides towards realizing a diverse, high-performing yacht industry regardless of gender. That includes boosting the volume of female applicants, as reflected in She of the Sea’s 2021 Annual Report which shows just 28 percent of the 30,000-yacht crew worldwide are female.

Even for Elin Signe Askvik, captain of REV Ocean, the world’s largest research vessel, believes there should be a focus on making the industry more diverse. “Not just to get more women to join yachting, but to have the full spectrum of people, personalities and skills,” she told Robb Report.

For Askvik, being raised by a sailor helped to fuel her appetite for a life at sea, but proximity to water is not a prerequisite for finding opportunities within yachting, says Patricia Caswell, Gulf Craft’s in-house yacht captain and quality control manager.

“I didn’t grow up by water, but when I finished high school my mother sent me out on a day trip sailing and the next day I applied for a job,” she told Robb Report. “I accidentally fell into yachting, but from day one that was it.”

Caswell began as a stewardess, before quickly realizing she preferred life on deck. She obtained her Australian captain’s license by the age of 21, followed by her Master 3000 at the age of 30. The topic of working within a male-dominated environment never entered her head.

“I grew up around car racing, so I was always around the boys,” she says. “It was just normal for me. I never thought about it.”

Caswell believes self-confidence and good diplomatic skills are integral qualities for any good captain. “You need to be strong and own what you do,” she says. Yawn agrees. “I encourage every woman to become a female captain. All it takes is a willingness to learn. I know it’s hard for some to accept that I’m the one that’s driving the boat, but I just keep it light-hearted. I know it’s just how they were raised.”

While the cruise industry has multiple examples of female captains in charge of large passenger vessels, the number is surprisingly low in yachting. In the niche realm of submersible pilots, females are even more scarce. Barbara van Bebber is just one of four female sub pilots in the world. Born and raised in the Dutch Caribbean Island of Curaçao where she heads up U-Boat Worx’s pilot training facility, Van Bebber has spent the past 11 years piloting research dives, testing new subs and instructing trainees on the fundamentals of submersible piloting.

“I never specifically thought about becoming a sub pilot because it’s a pretty far-reached concept,” she told Robb Report. “I grew up around water, animals and exploring the deep sea, and I’m a qualified scuba diving instructor, but I’ve always liked jobs that present a challenge.”

Since qualifying in 2010, Van Bebber has clocked an extraordinary track record. “I’ve been on expeditions to previously unexplored locations, had a new species of damselfish named after me, and have piloted dives with Richard Branson and Bill gates,” she says. “I love the opportunities that my job presents.”

Passion and motivation are not just common qualities among captains and pilots, they’re prerequisites, says Askvik. “Anyone who chooses a life at sea will face tough days and surviving it depends a lot on how you handle it,” she says. For superyacht broker Lea Tintaud, it was a “carpe diem” attitude that gave her the can-do attitude she needed to learn to pilot helicopters.

“In my early twenties I fell seriously ill with stage four cancer,” she told Robb Report. “I felt like giving up and my doctor told me to think of something I had always wanted to do and to promise him I would do it. I told him as a joke that I wanted to be a helicopter pilot. A year later, when I found myself in remission, he said, ‘I want your helicopter license on my desk within the next three years!’ It took me longer than expected, but five years later I was able to tell him I had kept my promise.”

Now able to fly a Robinson 44, Tintaud has found a practical application for her skill, flying clients to visit superyachts at the drop of a hat. “It’s the freedom it gives you, being able to land anywhere, and the chance to see landscapes from a different point of view that I love,” she says.

For Caswell, it’s simply being at sea. “I am probably at my happiest at sunrise when you’re on passage and you’re out in the middle of nowhere with that morning twilight shining through. That’s when I’m most calm. That’s my happy place.”