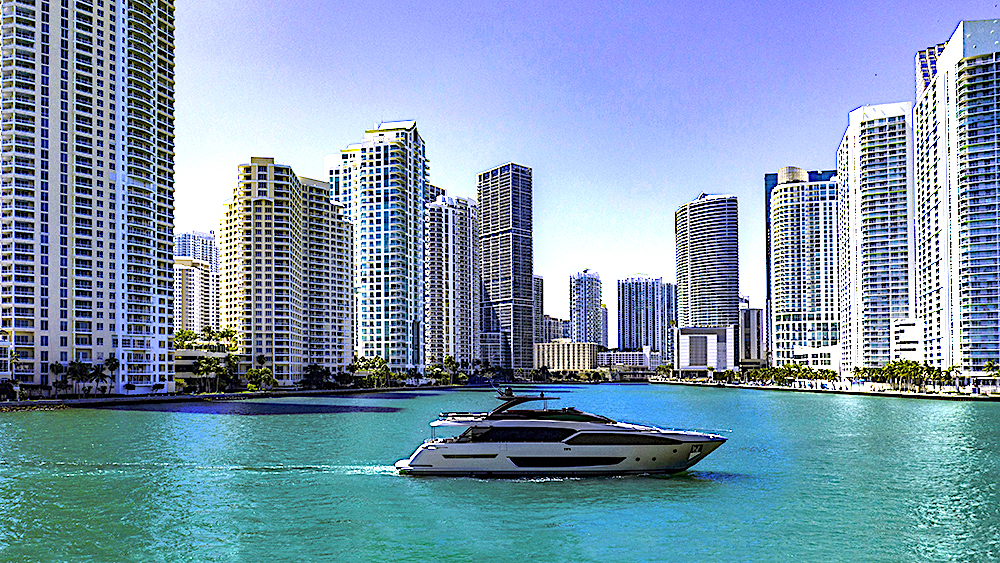 An exceptionally long, aquamarine carpet extended along the waterfront, as hundreds of Riva’s guests waited for a peek at the new Riva 90 Argo flybridge yacht, approaching the marina in front of the Kimpton Epic hotel in Miami sometime after sunset. European yacht builders don’t usually premiere their new yachts in the States. The partying usually take place at the company’s yard in Italy or the Netherlands or the UK. This was a special occasion, and Riva made quite a highbrow hoopla to note it.

“America is a very important market for us,” says Alberto Galassi, Ferretti Group CEO, Riva’s parent company. “It’s a good idea to present our boats in the best places in the world, and differently so. One is presented in the Mediterranean, which is the 110 Dolcevita in Monte Carlo, the Corsaro in Hong Kong, and for the 90-foot sister Argo, we decided Miami was the right location. For us, this is the most important part of our American market.”

The rhythm of Queen’s “We Will Rock You” built the anticipation—thump, thump, clap. Thump, thump, clap. Amid spotlights and music, and then fireworks and fanfare, the sleek dark figure of the first Argo glided into view, the captain performing essentially a slow pirouette with the 93.5-foot yacht. The underwater lights were ablaze, so we could all see each and every angle of the Riva 90 Argo, the plans for which were announced in October at the Fort Lauderdale boat show and then teased in January at boot Düsseldorf.

“Riva is a global brand that has 107 years of history. It’s the only brand, I think, where you don’t have to say that you have a boat. You actually say that I have a Riva. Everybody understands what you own,” says Galassi. “So, I think the US deserves a world premiere of this class.”

The first thing I noticed about this first example of Riva’s 90 Argo were the many large windows in both the hull and the superstructure of the yacht. Next was the vessel’s sleek, angular lines, with a raked bow and reversed transom that hides the stairs leading to the extended swim platform/beach deck. The raised helm station sports a large windshield and more windows along the sides, emphasizing the yacht’s aerodynamic lines.

“We named it after the Argo, which was the vessel of the famous Argonauts and the first-ever ship to sail the seas. It is also the Italian name for Argos, which is one of the largest cities in Greece. With its innovative looks and its fabulous fusion of style, luxury and technology, Argo has set a new benchmark that will guide Riva and the nautical world in the near future,” says Galassi.

When I toured the boat with Galassi the next morning, I was surprised to discover how many spacious staterooms Officina Italiana Design and Ferretti Group’s Product Strategy Committee and Engineering department were able to carve out of 90 feet of yacht.

There are four: the full-beam, main-deck master suite with large windows and a sunken bathroom; a full-beam VIP suite down below that includes a king-size berth, sofa, desk, and bath; a double guest stateroom with bathroom; and a convertible cabin, whose berth goes from a king to a double and a single, also with a bathroom.

I was a little disappointed that none of the cabins offered a tub, but I am already over it. Argo comprises two crew cabins as well.

Natural wood, real leathers and stone are used throughout the interior, glitzed up a bit with shiny chrome insets and black-lacquered overheads.

“You know what Enzo Ferrari told me one day, the founder of Ferrari? To build a nice-looking car and to build an ugly [car] costs the same, so that is why we try to make it nice. They have to be beautiful,” says Galassi.

Everyone uses his or her yacht differently. For those of us who like to soak up the sun and the great outdoors, the flydeck, with two helm seats, offers up a shaded bar and dining table, as well as sun loungers aft.

Dining area on the upper deck.  Photo: Courtesy of Riva

Up on the forepeak is a U-shaped sunning sofa, and the main deck aft—designed just for the American market—welcomes guests on board with a couple of sofas, seats, a bar, and a table by the Italian designer Paola Lenti.

Steps down, the swim platform provides easy access to the water. Argo’s garage has space for a Williams SportJet 395 tender and a personal watercraft, for those who would rather be on the water than in it.

But I’m sure most are dying to know what kind of power this sexy new yacht produces. This first hull is fitted with twin MTU 16V 2000 M93 engines generating 2,400 hp each. They fire up the 90 Argo to a 30-knot top speed and a cruising speed of 26 knots, making the most of the efficient warped (or modified-V) hull with an aft deadrise. This type of hull allows the vessel to travel faster than if it had a more constant deadrise, as is the case with a typical deep-V hull. And really, 30 knots is an impressive feat, pointed out Galassi, considering the square footage of heavy windows, natural materials like wood and leather, and all of the other amenities that make this sporty yacht comfortable as well as stylish.

“Weight is definitely—as in the air—the enemy of speed, so the performance of the Argo is very good,” Galassi says. “The combination and the fuel consumption of the engines is excellent, so it’s not a crazy, fuel-burning machine.”

Cruising at 26 knots, this example’s engine combination has a 300 nm range and 275 nm at 30 knots. So range depends on how fast you go; if you want to go full speed, range is going to shrink. Vessels of similar size and fit-out pull off less than 30 knots, but have greater range—some as much as 1,400 nm.

Two other engine options are available, including the standard twin MTU 12V 2000 M96L engines producing 1,920 hp each, giving the 90 Argo a cruising speed of 22 knots and a maximum speed of 26. And the third option is two 16V 2000 M84 engines rated at 2,188 hp, allowing the vessel to cruise at 24 knots and hit a top speed of 28. Underway and zero-speed stabilizing fins come standard, keeping those on board from rocking and rolling. Optional Seakeeper gyrostabilizers can be installed on request to keep things steady when at anchor.

“It’s very silent, very smooth, if I may say. There’s so much steel on this boat—and glass. Glass is extremely heavy, you see. We don’t have boards actually, we are surrounded by glass. It’s sort of a little crystal palace,” notes Galassi.

When asked about selling boats at the fairly new showroom in Southern California’s Newport Beach, Galassi explained, “We sell emotions, we sell pleasure, we sell entertainment, we sell a good time, we don’t sell boats. We sell a pleasant way of living.” I can buy into that.