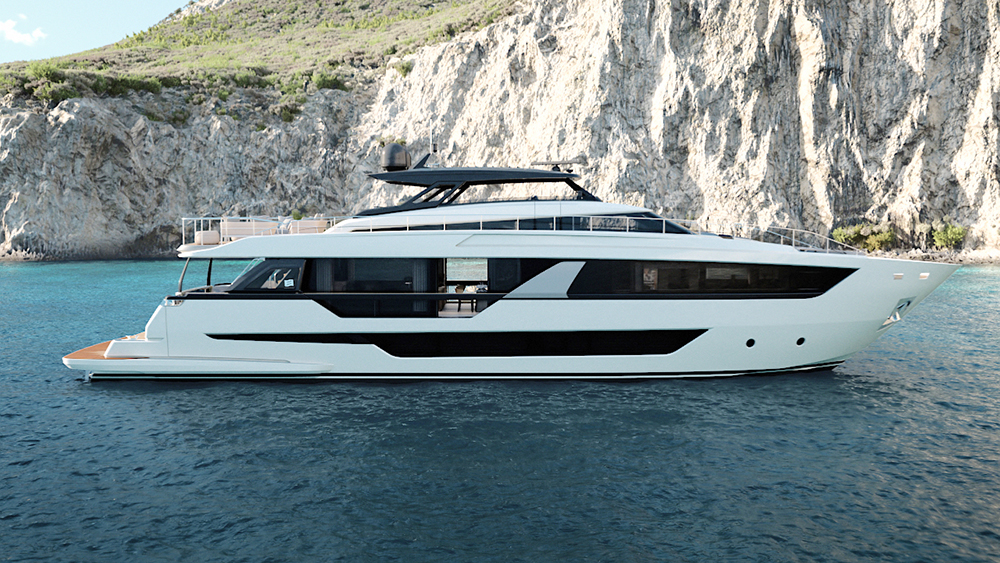 Ferretti is going bigger and better than ever before. The Italian superyacht builder has revealed its new 100-foot flagship, which will become the largest vessel launched by the team.

The Ferretti 1000 was first floated as a concept at the Boot Dusseldorf boat show in January, but now we’re finally getting the full monty. Well, some more pictures, at least. The 1000 features a sleek, sporty outline, with lateral glass structures aft and amidships that are akin to the other models in her range. But this vessel will set a few Ferretti firsts.

For starters, it will be the shipyard’s first 100 percent wide-body vessel as well as the first to feature a substantial amount of carbon fiber. All of the superstructure, including the hardtop, will be forged from the lightweight material, which means despite the vessel’s size, she’ll still be plenty agile.

The 1000’s exterior was penned by Filippo Salvetti, while her interiors were designed by IdeaeItalia. Inside, the vessel aims to flips the script when it comes to life onboard. Thanks to the revamped stern, there’s 430-square-feet of living space, which have been designed to optimize flow for all you Feng Shui adherents.

“The new concept for onboard flow that has been introduced here is set to become an iconic part of all of the large vessels in the range,” Salvetti said. “Designed with the future in mind, this new creation takes things to the next level for faithful Ferretti Yachts customers.”

The modern interior is highly versatile thanks to a modular layout, which can be customized to suit each owner’s needs. Italian taste shines through in the use of refined hard materials, such as teak and marble, which are juxtaposed by soft furnishings. Meanwhile, large floor-to-ceiling glazed windows promise to saturate the interiors with natural light.

The 1000 can sleep up to 10 seafarers across an owner’s suite on the main deck and four guest cabins on the lower deck, as well as five crew. Elsewhere indoors, there’s a large 100-square-foot galley—which features an electric wall that opens onto a bar, because why not?—and an expansive lounge that overlooks the ocean.

Meanwhile, outdoors, you’ll find an aft beach area complete with a swimming platform and wellness area, along with a spacious flybridge that is connected directly to the forward section. On the starboard side, there’s a generous garage that can accommodate a Williams Sportjet 445 tender, a personal watercraft and two Seabobs.

As for power, the 1000 will be fitted with twin MTU 16V 2000 M86 engines that will see her reach a top speed of 28 knots and cruising speed of 24 knots. Optional extras include a gyroscopic stabilization system and stabilizing fins, which will keep the vessel dead quiet while at anchor and at sea.

Hey, bigger may be better after all.