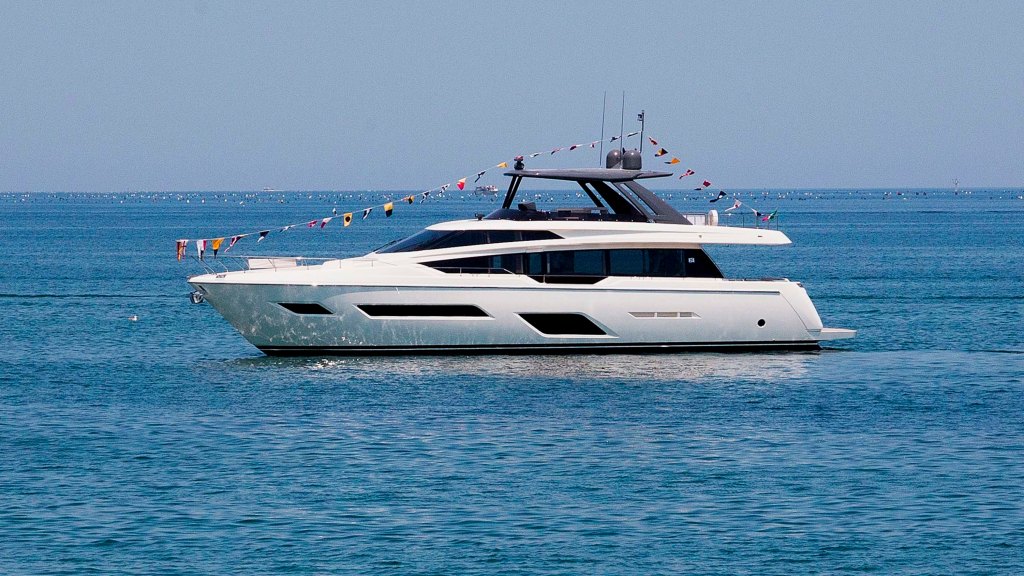 The new Ferretti Yachts 780 had its technical launch recently, in preparation for a private event by the Ferretti Group in Monaco in September and the official debut at the Cannes Yachting Festival. The yacht will make its U.S. launch at the Ft. Lauderdale International Boat Show in early November. The 78-footer’s design, created in collaboration with Studio Zuccon International, Ferretti’s product strategy committee, and its engineering department, accentuated the long, sleek lines, and maximized user space, both inside and out. The flybridge, for instance, has lounges just behind the double helm seat, a wet bar to starboard, and three sunbeds facing aft, looking out over the water. An opening hardtop allows for climate control. In the bow, twin sunbeds and a lounge turn the 780’s forward section into a legitimate social area, rather than the two-person nook on many flybridge yachts.

The interior looks more like a luxury apartment on the water than a traditional boat cabin. The designers used an interconnected series of windows from the rear cockpit to the forward bulkhead in the saloon to emphasize natural light and exceptional views of the water, combining light-colored flooring, off-white headliners, and dark walls to give it an upscale feeling. The nine-person dining table forward is also well placed behind the enclosed galley. Just forward, behind another bulkhead, is the secluded helm area. The layout works on a boat of this length, making the long saloon seem just the right size, rather than too large or overly claustrophobic. Ferretti also offers this main deck in an open-galley configuration for those who prefer to converse with the chef, who is often one of the owners, during meals.

The lower deck has a four-stateroom layout, or an optional second saloon with two staterooms. The lion’s share of either configuration is amidships where the saloon or master suite is positioned. Both choices are full-beam, and the owner’s suite includes an open bedroom, walk-in closet, desk against the portside windows, and a large en-suite bathroom with enclosed shower and his-and-her sinks. The VIP bedroom in the bow and two twin staterooms are all en suite. Crew quarters at the stern have two separate berths. The 780’s power comes via two MAN diesel engines, twin 1,400 hp MAN V-12s that deliver a top speed of 28 knots, or the 1,550 hp V-12 that pushes the boat to 31 knots.