From somewhere off the Venezuelan coast, over his SatCom phone, the owner of the 147-foot Delta Marine yacht Gran Finale provides an update of his boat’s early November travels. The vessel, which was delivered last March, is en route to Isla la Tortuga and Isla de Margarita. “It’s lovely,” he says. “It’s 85 degrees, no humidity, excellent weather—perfect.”

However, he has one major complaint: The sailfish are not even nibbling. “We’re fishing right now, dragging some lures, but they haven’t bit yet,” says the owner. “It’s not very good, compared to Costa Rica and Mexico. Fishing is a real disappointment.”

Off Costa Rica, the fish were practically leaping on board; one day, the owner and his guests landed seven sailfish while cruising at 12 mph on gentle seas. Conversely, while traveling from Panama to St. Thomas, Gran Finale encountered 45-mph gusts and 10-foot seas that might have frightened even the bravest marlin, not to mention the travelers on a yacht’s maiden voyage. For nearly seven days and 1,500 miles, however, Gran Finale effortlessly churned through the chop. “The whole time, we were leaving our coffee mugs on the counters,” says Chris Brown, the yacht’s captain. “The boat took it like a champion.”

Gran Finale’s grand voyage (the boat will visit the Bahamas, New England, the St. Lawrence River and the Great Lakes, the Caribbean in the winter, and the Canary Islands) is the payoff for a four-year interval that included conducting countless interviews, choosing from three potential builders, and enduring a late glitch that delayed delivery by six weeks. The views, the rave reviews of guests, and the voyage of a lifetime have made the boat worth the wait.

The owner had previously commissioned the construction of two Italian yachts, which he sailed in the Mediterranean, and a 66-foot Nordlund that he still owns. Mechanical problems plagued his Italian vessels, and he did not enjoy cruising elbow-to-elbow in the boat-choked seas and ports of the Mediterranean. He wanted to work with a builder in the Pacific Northwest that could deliver a sexy but technically sound yacht that he could cruise with his family and friends in the Caribbean, his favorite region of the world. “The water is 82 degrees,” he says. “There are beautiful white sand beaches and lots of vegetation. There are nice anchorages where you can drop the hook and be self-contained. We don’t like to hang out in the marina.”

He hired Ken Keefe, a Bay Area yachting professional, as a consultant who would guide him through the purchasing process. Together, they interviewed designers and builders, conducted tank tests, and took demonstration rides on various megayachts. After narrowing down his search, he selected Delta because of its high quality, spotless reputation, and superior tank tests.

Phone lines between San Francisco and Seattle, the site of Delta’s headquarters, soon began to sizzle. Every day, Keefe and the owner called Delta and Juan Carlos Espinosa, the boat’s designer, to discuss possible layouts. The owner, a Ferrari enthusiast, wanted a similarly sporty yacht that would cruise well in high seas. To achieve this objective, Delta and the owner agreed to keep the upper deck area small, allowing for a lower center of gravity.

Once Delta began construction, Keefe and the owner visited the yard nearly every other month and reduced the frequency of their phone calls to once a week. Construction progressed until the very last moment, when a faulty coupling affected the drivetrain and sent vibrations shuddering throughout the boat. The yacht went through its sea trials, but it would not be ready for delivery for another six weeks. “I’m really glad that ordeal is over,” the owner says.

The last-minute delay spoiled the owner’s plans to launch his Caribbean cruise in December 2001. Instead, Gran Finale began its journey in Mexico three months later—to no complaints. The owner and his guests enjoyed cruising along the Mexican coast and Costa Rica, through the Panama Canal, and around the Virgin Islands. The owner would cruise for two weeks, fly home for the next three, then return to Gran Finale, continuing this pattern as he voyaged to Martinique, the Grenadines, and the islands of Aruba, Bonaire, and Curaçao.

So far, the highlight of his cruise has been St. Lucia. His grandchildren, on school vacation, boarded Gran Finale on the island, where they enjoyed the twin 2,000-foot peaks of The Pitons and the amenities offered by the Jalousie Hilton Resort and Spa—and the compliments of seemingly every native and Tourist. “Everybody thinks it’s the prettiest boat on the water,” says the owner, who is in complete agreement with this assessment.

In hindsight, he says, the delay has had no ill effect on his journey. Temperatures are steady in the mid-80s, the humidity is low, the trade winds are light, and he has seen few similarly large yachts in the area.

Some owners might consider putting their yachts up for charter or begin building a new boat. Not this owner, however. He has no plans for another boat—ever. There is a reason why he named this one Gran Finale.

CHARTER TO THE CARIBBEAN—AND BEYOND

If you also have a passion for the Caribbean like the owner of Gran Finale, you can charter a private journey to the region for your next vacation. However, do not limit yourself to Aruba and the Bahamas; today’s top charter operators provide luxurious yachts that cruise in the Mediterranean, New England, or wherever you wish to travel. 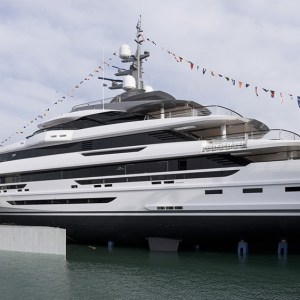