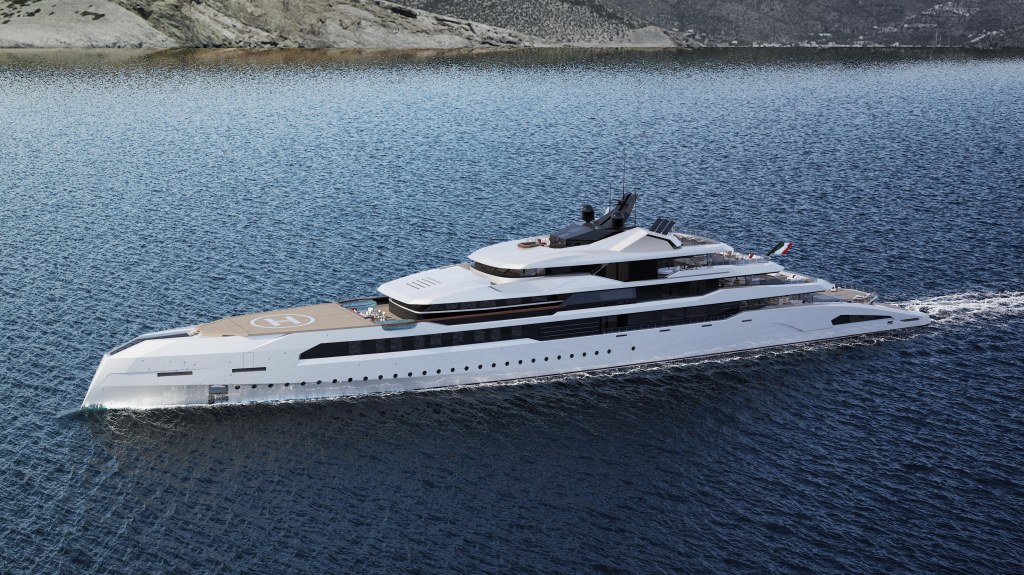 The five-deck Ganimede concept, unveiled by Fincantieri at the Fort Lauderdale International Boat Show, is named after a young man who was kidnapped by Zeus, posing as an eagle, to serve as the chief wine-pourer on Olympus. Ganymede was the most beautiful of mortals, according to the legend, and certainly provided the right kind of inspiration to the designers at Milan-based HotLab, who fashioned the yacht’s forward section to look like an eagle’s head in profile. But the design is much more than a stylized superyacht.

Ganimede’s impressive 371-foot length and 51-foot width gave HotLab vast amounts of space to work with, and the designers were not shy about using them to full advantage. The beach deck is more than 65 feet long, styled like an Italian garden with a central pool, waterfall, and lounges. It connects to the main deck via an art deco–style spiral staircase in the center. Four more successive decks climb toward the skydeck, offering large exposed areas at the stern, with center interior saloons and staterooms, and forward outer sections. The foredeck will be a certified helideck.

The beach deck is more than 65 feet long, styled like an Italian garden with a central pool, waterfall, and lounges.  Photo: Courtesy Hot Lab

The owner’s suite is fit for a Greek god, occupying the entire forward section of the yacht and extending outward as a large terrace into the bow. Full-height windows in the owner’s private lounge offer exceptional sea views. The palatial bedroom benefits from the full-beam space, while the bathroom will be dressed in marble and wood.

HotLab did a good job maximizing the elegance while keeping gratuitous opulence to a minimum. The renderings present an interior that is grand but not overbearing, a sense of style that matches the length. Besides the owner’s suite, there are six staterooms for 10 guests. The yacht also has a capacity for 31 staff across 20 crew cabins.

The renderings present an interior that is grand but not overbearing.  Photo: Courtesy Hot Lab

Fincantieri forecasts Ganimede will have a top speed of 19 knots, with a range of 5,500 nautical miles at 14 knots. It will have the capacity to carry a 35-foot-long tender along with a flotilla of other tenders and many water toys.