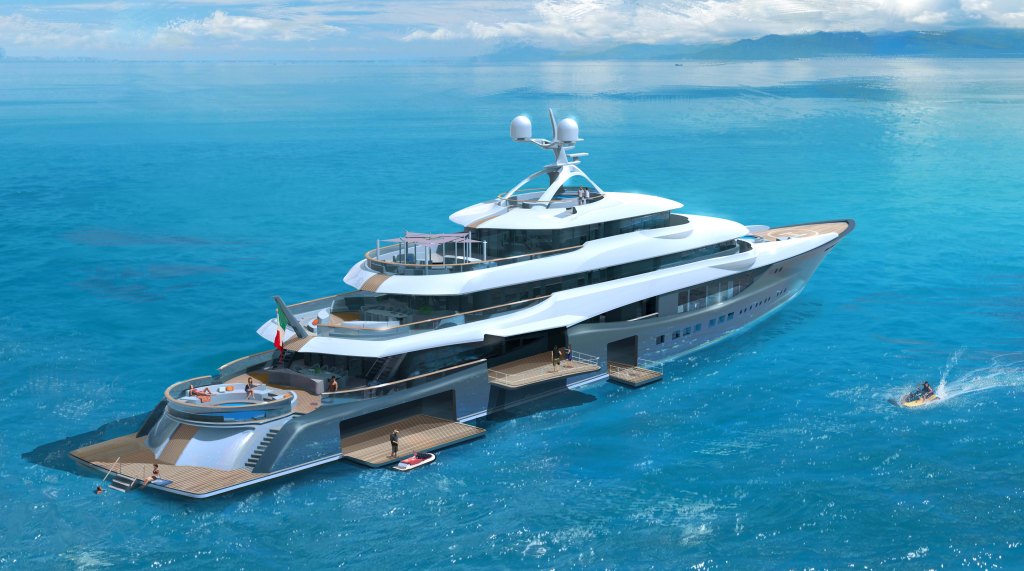 Curved upper decks mated to a straight, fairly traditional hull give the 295-foot Linea its distinctive look. The concept yacht was introduced at the Monaco Yacht Show by London-based design firm Claydon Reeves and yacht builder Fincantieri Yachts. The designers created a slender, taut profile with a “meaningful snap” at the very open and user-friendly stern. “The subtle concave hull detail creates pools of light on the flanks,” says designer Mike Reeves. “The superstructure is crisply drawn, referencing the many classic cars that have become a hallmark of Italy.”

Linea is certainly a yacht focused on the outdoors. Its stern features not only an extended beach club complex with full gym, but also three foldout platforms along the yacht’s sides. The amphitheater-style Jacuzzi on the stern deck provides exceptional views of the water while allowing owners and guests to watch the onboard cinema at night. The upper sundeck sits like an eagle’s nest high above the yacht, with a hot tub for periods of prolonged relaxation beneath the radar arches. On the deck below is a circular seating area surrounding a fire pit. This area accesses the upper saloon, which is wrapped in floor-to-ceiling windows.

“Perhaps the most unique feature is the owner’s forward deck, which can be privately accessed through the master cabin,” says co-designer James Claydon. “This space has been carefully designed so that it is not overlooked by the bridge, providing privacy for the owners.” Compared to most superyachts, this private deck space is vast, with lounges, sunbeds, and a Jacuzzi. Just beyond the owner’s sanctuary is a touch-and-go helipad.

The designers say that Linea is more than a fantasy concept. “By embedding the engineering realities in the general arrangement and exterior we have produced a design that is bold and unique but also completely buildable,” says Reeves.