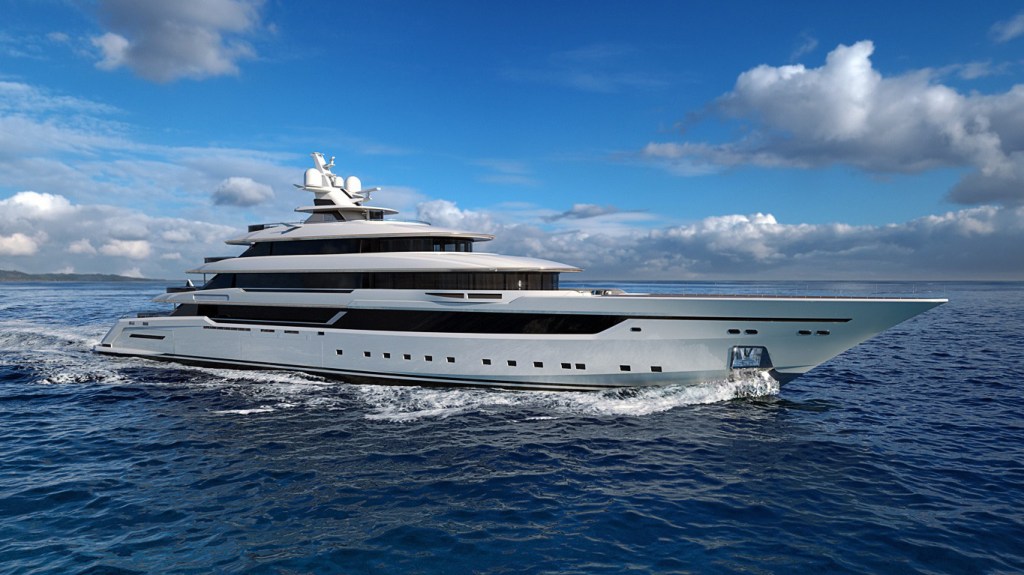 Columbus Yachts will deliver its first-ever superyacht in 2019. The Columbus 80m yacht promises to grab the superyacht world’s attention right out of the box. The 261-footer, with a 43-foot beam, has a classic-looking exterior, inspired by the harmonic lines of 1950s ocean liners. But the six-deck yacht also has compelling modern designs like a glass elevator connecting five decks, one of the coolest swimming pool/Jacuzzi combinations on a yacht, and meticulously planned areas for 12 guests, crew of 19, and, of course, the owner.

The owners have a complete deck for their own use. Their apartment includes a full-beam bedroom at the bow, with a 180-degree panoramic view of the water, two bathrooms, and a walk-in changing area. The deck also has a separate office and private saloon for relaxing or receiving guests.

On the main deck, six large guest suites are located in the forward section, with a seventh cabin for guests on the lower deck. Guests also have the run of the beach club on the lower deck at the stern. The beach club’s side bulkheads fold outward from both sides of the yacht, creating open terraces and expanding the usable space from 1,100 to 2,200 square feet. The beach club also includes sunbeds, bar, shower, and sauna. Other notable amenities: a cinema on the upper deck and full gym on the sky bridge. (The crew even has its own gym on this yacht.) Arguably the coolest feature is the 23-foot-long pool, with its own counter-current swimming system and waterfall, connected to a large Jacuzzi. The waterfall actually creates a natural barrier between the pool and Jacuzzi, and thanks to another nice space-saving flourish, the Jacuzzi was built into the yacht’s mast so it’s enclosed on three sides. That makes the hot-tub experience somewhat like being wrapped warmly inside a natural grotto, with a waterfall in front.

Columbus is part of the large shipbuilding conglomerate, the Palumbo Group, so its shipyards in Ancona and Naples are building different components of the yacht. The steel hull will be moved later this month from Naples to Ancona to be joined to the aluminum superstructure for the final fit-out process. The marriage will take place in a new facility that Columbus built specifically for superyacht construction.

The Columbus 80m will be powered by twin MTU 16V 4000 M63L diesels for a top speed of 16.5 knots. At 12 knots, the new Columbus will have a range of 6,000 nautical miles, giving it the ability to re-create Christopher Columbus’s original voyage of crossing the Atlantic for the New World and back again.