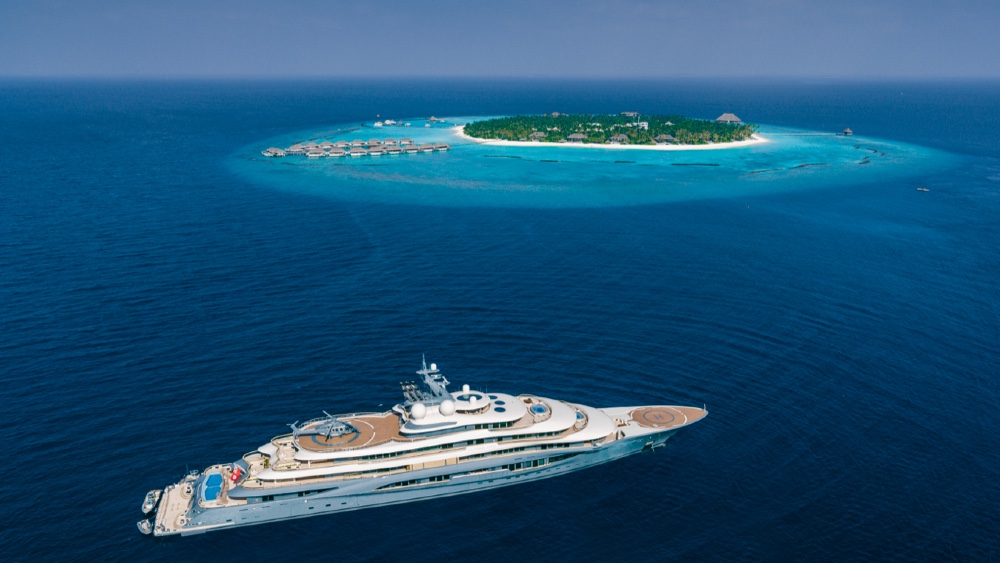 Three time’s a charm for the owner of Flying Fox. Not only did he want hearts to beat faster when guests came aboard this magnificent 446-foot Lürssen, the owner wanted to make sure he included every whim and fantasy for his own pleasure. Think features like the two-deck spa, a professional dive center, two helipads for corporate helicopters, the world’s largest transverse swimming pool and, naturally, a cryotherapy center. He also staffed it former Olympic athletes and British ex-military to provide a first-class crew.

The good news is that Flying Fox can be shared by the rest of us—or some of us, for about $4 million per week. The length makes her the  largest yacht available for charter. Delivered in 2019, she has just about every luxurious amenity imaginable. In a very real sense, she doesn’t just raise the bar—she sets a new one.

The first glimpse of the turquoise Espen Øino exterior is a quick reveal of the scope of the six-decked vessel. On the aft end, the 40-foot swimming pool immediately catches the eye. The largest transverse pool on any yacht, it has a retractable wall that can divide the water in two. That gives guests a choice between fresh water or salt, and temperatures ranging from steaming to icy.

The yacht has every possible toy imaginable—and many others that surprise, including a professional dive center, cryotherapy spa, and an onboard hospital.  G. Plisson for Imperial

The yacht’s two helipads also offer owners and guests a degree of flexibility. The 60-foot spot on the stern is the primary landing area for the owner’s H175 Airbus helicopter, with a second 49-foot helipad on the bow. Capable of carrying 12 guests, the H175 is one of the few VIP-configured models on the market. It’s also the owner’s favorite mode of transport.

Built for private use but conceived with the potential for charter, Flying Fox took three years to design. The owner wanted to make sure he included everything he’d missed on his previous two yachts. Imperial Yachts managed the build and is now overseeing charter.

“The original design process was about finding the balance between what the client was expecting and what was possible in terms of technology,” Eric Lepeingle, Imperial’s head of sales and charter, told Robb Report during an exclusive virtual tour. “The idea of having a meticulously designed yacht that also delivers on a technological front really pleased him.”

This view of the stern gives a sense of the vast but proportional scale of the 446-ft. gigayacht. Not pictured is the 60-ft. helipad on the swim platform.  G. Plisson for Imperial

Beyond her sheer size, the intersection of technology with gracious living is what defines Flying Fox. A large sundeck converts into a dance floor by night, offering live music, private dining and fireworks for the ultimate shindig. The 1,300-foot, two-decked wellness spa is one of the signature accomplishments of the design. Its “sea lobby,” with heated limestone floors and louvred oak paneling, one of the inspirations from interior designer Mark Berryman, makes a beautiful welcoming area, while the sauna, hammam, jacuzzi and relaxation room (with a fold-down balcony at sea level) set the tone.

Flying Fox also has the first cryo-sauna ever installed on a yacht, bringing the spa experience to the next level. It has an antechamber set at -40 ̊F, followed by a main chamber at -116 ̊F. Cryotherapy is typically favored by elite athletes for muscle regeneration. “When he’s on board, the owner enjoys kitesurfing, jet skiing, diving,” says Lepeingle. “He wants to be able to recover quickly. He also wants charter guests to be able to enjoy any activity, so the yacht is designed to anticipate all requirements.”

Adjacent to the Zen-themed spa is the dive center, which includes a three-person decompression chamber and the option to dive depths of up to 328 feet. “To date, our charter guests have enjoyed diving depths of no more than 165 feet,” says Lepeingle, “but if people want to push their limits, we can help them to do that in the most secure way.”

Designer Espen Øino took great care to ensure that the exterior spaces flowed easily into each other.  G. Plisson for Imperial

Supporting this ethos are the 54 onboard crew. The sports, gym and diving instructors are either former Olympic athletes or ex-British military. The helicopter is serviced by a dedicated pilot and engineer, and the onboard hospital (directly connected to a mainland hospital on a 24/7 basis) has a permanent medic. “Most the crew are typically ex-military because the owner believes military personnel have discipline and experience that normal crew don’t,” says Lepeingle.

Another prerequisite of the owner is the aft open-air galley. Five different types of ovens—tandoor, pizza, barbecue and two rotisseries—are joined by two teppanyaki grills and an alfresco dining area that seats 24 guests. Its five chefs cater for multiple diets and cuisines, all freshly prepared in full view. “One of the rotisseries can fit an entire lamb,” says Lepeingle. “The banquet opportunities are exceptional.”

As a PYC-classified yacht Flying Fox sleeps up to 25 guests, with a crew-to-guest ratio of two to one. The 328-square-foot master suite on the main deck stretches the full 74-foot beam width and takes in a dedicated salon, gas firepit and private jacuzzi (one of three on board). Even the onboard 20-foot irrigated trees are well-watered.

The yacht has two helipads on the bow and stern. Pictured is its Airbus C175 corporate helicopter, the owner’s favorite mode of transport.  G. Plisson for Imperial

Flying Fox has mostly cruised the Eastern Mediterranean, with Turkey and Greece being the owner’s preferred cruising grounds. The yacht did a stint last winter in the northern most atolls of the Maldives. Currently in port in the Mediterranean, she will be heading to Croatia this summer and is available for charter through Imperial.

Here’s an exclusive video tour of the yacht. Check out other images below.