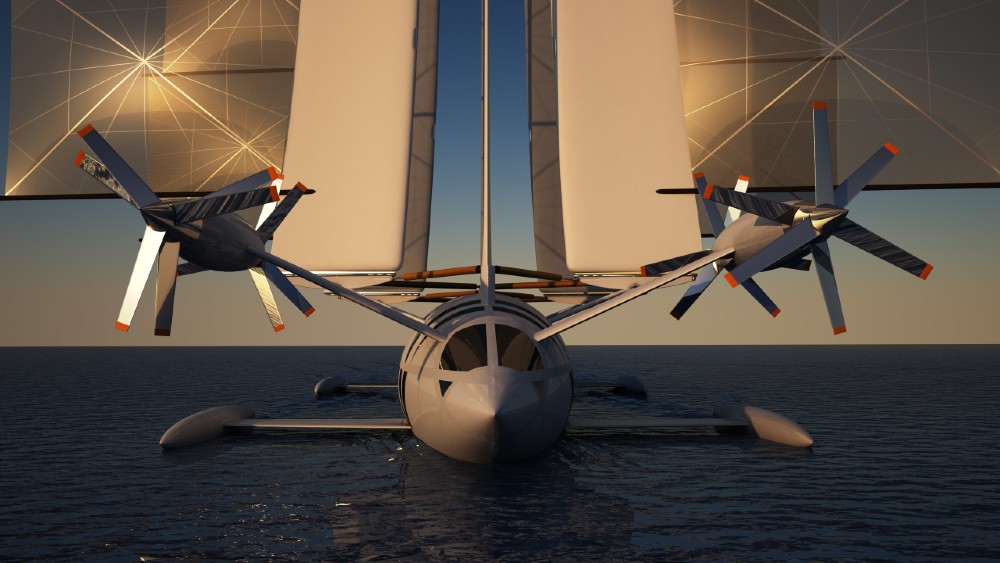 Forget flying cars. One bold designer wants to help you live out your Baron Munchausen dreams.

The Flying Yacht, a new concept by designer Yelken Octuri, takes two potentially conflicting forms of transport and melds them into one spectacularly wild vessel: an ocean trimaran that converts into a jet-size aircraft. In “Boat” mode, the 152-foot length and 89-foot beam provide enough interior space to serve as a 10-person motoryacht, while in “Airplane” mode, the 297-foot wingspan and four engines deliver enough lift and propulsion for theoretical top speed of 210.5 knots, or 242 mph.

An aircraft designer by trade, Octuri came up with the Flying Yacht concept after researching gargantuan 1940s aircraft like Howard Hughes’ H-4 Hercules, better known as the Spruce Goose, the largest flying boat ever built, or later flying boats like the Soviet Union’s Ekranoplan, which looked more like a monster jet stranded on the water than a boat. As the military vessel accelerated, ground effect—a cushion of air trapped beneath the hull—lifted it about 10 feet, so it glided over the water at tremendous speeds.

The Flying Yacht has an extra component—14,000 square feet of sail on four 133-foot-high masts—that makes it a much more complicated design, at least if it were going to function in the real world. The multifunction vessel uses the sails for propulsion, and when the sails retract, the masts lower to become wings.

Here’s the Flying Yacht with sails raised and wings preparing for takeoff. The sails retract into the body of the vessel.  Courtesy Octuri Design

Octuri’s website suggests that the Sail Yacht was actually built, but he’s quick to point out that the details are pure fantasy. “But I still get many people contacting me, asking to know the price,” he told Robb Report.

The designer literally threw engineering to the winds with this sci-fi concept. Octuri focused on what he thought looked cool, rather than develop a feasible plan for a crossover vessel.

“I know how tens of thousands of details go into designing any aircraft,” Octuri says. “If I wanted to compile all that data to build this concept, it’d take a lifetime. I decided to ignore the engineering when I started.”

Still, Octuri’s 3-D visuals and focus on details—the yacht will have two main decks as well as half-decks in the bow and stern—as well as line drawings, give it a sense of authenticity. It looks like something that, well, could be feasible in 20 or 30 years. Or maybe it could appear sooner in an upcoming Star Wars movie.

“The trick is to stay open to your ideas,” he says. “Most of the time we censor them.”

A variation of this design could actually work, Octuri believes. “A more realistic approach would be a hybrid between an ekranoplan and catamaran,” he says. “That could function.”

Thanks to its 150-foot length and nearly 90-foot width, there is plenty of interior space. Here is the main deck salon, with stairs up to the staterooms.  Courtesy Octuri

When asked about his favorite feature of the Flying Yacht, the designer stops to think. “That’s hard to answer,” he says. “I guess the ability to help people dream.” Baron Munchausen would be proud.