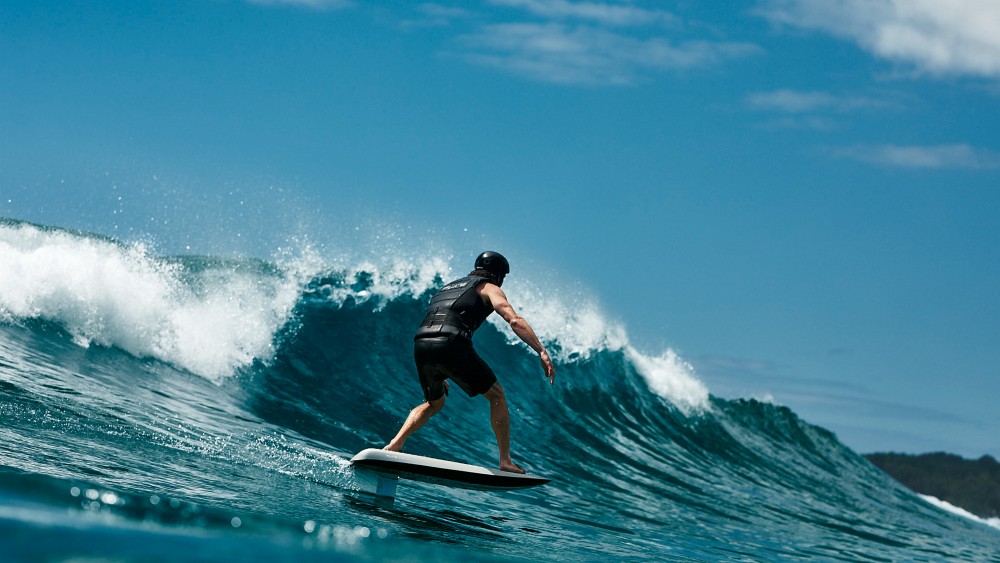 A hydrofoil-equipped, electric-powered surfboard that flies above the water at more than 35 mph for two hours on a single charge makes for a fun afternoon, but it may also be a harbinger of the boating industry’s future. “Everything is rapidly going electric—cars, planes, skateboards—it makes sense for marine to transition to those power sources too,” David Trewern, CEO of Fliteboard, told Robb Report. “From the start, we thought of the Fliteboard as a great way to show the potential of e-power and capture the public’s imagination.”

Mission accomplished. Fliteboard says it hit $100 million in sales in its first three years. And it’s far from the only combination of hydrofoil and electric motor to emerge in the last year. “Foils are the magical enabler that makes electric practical for marine transport,” Trewern says. The company has competitors that include Radinn’s X-Sport and YuJet’s electric surfboard.

Foils have long been a part of competitive sailing in the America’s Cup and more recently, Sail GP, but now they’re on surfboards, electric powerboats and even waterborne bicycles.

The foils on the Manta5 hydrofoiler provide stability, while its electric motor can push its non-pedaling speed up to 12 mph.  Courtesy Manta5

The physics are simple: The relatively large surface area of a boat’s hull—or even a surfboard—creates a massive amount of drag, which requires a lot of power to push across the water. The horsepower needed to propel the vessel also adds weight, creating a vicious cycle that necessitates more horsepower. A battery bank for an electric motor is even heavier than a conventional gasoline engine, making pure e-power at sea a near impossibility, at least for fast cruising over long ranges.

But a hydrofoil—an underwater, carbon-fiber wing that lifts the hull clear of the water—cuts the drag to almost nothing. Suddenly, electric power is a viable option. “They’re quiet, they create almost no wake, which is better for preserving banks and coastlines, and they have no emissions,” says Trewern.

Now that hydrofoils and electric engines have found each another, water travel may never be the same. Candela builds two models of foiling electric runabouts, each of which reaches a top speed of roughly 30 knots and has a cruising range around 55 miles.

Thanks to the foils—which translate to minimal wetted surface and minimal drag—Candela’s C8 has a top speed of 30 knots and range of 50 miles. Those are far better stats than its non-foiling electric competitors.  Courtesy Candela Yachts

That’s enough power and speed to pull a rider on a foiling wakeboard. Navier is also in the process of building its first 27-foot electric runabout, with three retractable foils.

At the other extreme of the runabouts is the Manta Hydrofoiler, a foiling water bicycle with a variable-speed electric-assist motor that can provide as much or little boost as the rider chooses. At the lowest setting, the motor will allow the foils to lift the body out of the water with minimal pedaling. At full power, it’ll push the Hydrofoiler to 12 mph.

The range of water toys and real boats that are moving towards electrification is proceeding quickly, with more than a dozen new products announced each year.

Trewern, who lives on Australia’s Byron Bay, anticipates a very different future for boats and other vessels that is quickly beginning to emerge. “When I look out there,” he says, “I can imagine a time maybe five years from now where all I see are electric vessels.”