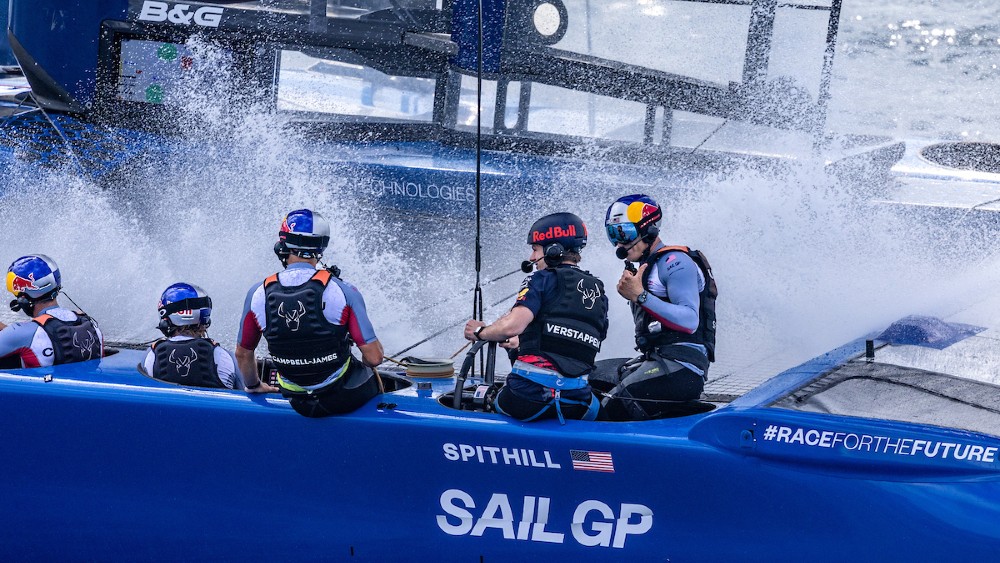 Formula 1 drivers Max Verstappen and Sergio Pérez had a chance to test their driving skills on the waters off St. Tropez yesterday, briefly taking the helm of a SailGP raceboat. The fledgling sail-racing circuit, which many refer to as “F1 on the water,” hosted the two members of Oracle Red Bull Racing as a publicity move before SailGP’s next race this weekend at the Range Rover France Sail Grand Prix.

Verstappen, fresh off a win in last weekend’s Dutch Grand Prix, noted the differences between being behind the wheel of a race car and at the helm of the F50 racing catamaran. “We reached speeds on the water that were very impressive,” he told Robb Report on a call with several other reporters. “I really enjoyed driving it, with good guidance, of course. And I liked the way the team moved around, running from side to side.”

On paper, the two circuits seemingly couldn’t be more different. First, there is the land and sea differentiation. With more than 400 million fans, F1 has one of the world’s largest followings of any sports, with more spectators than the NFL. The Netflix series, “Drive to Survive,” has created an American following for F1, complete with storylines that have made Verstappen and Pérez internationally known characters. The first Grand Prix in Miami was treated more like a Super Bowl than a car race, showing F1’s new  popularity in the US.

Verstappen and Pérez being shown the 50-foot cat’s wheel by US driver Jimmy Spithill.  Courtesy SailGP

By contrast, SailGP is trying to find a new audience in a sport that is traditionally seen as stodgy and elitist.

F1 is also a more solitary pursuit since the drivers are alone, while SailGP involves a team effort on the boat. “I would’ve thrown someone in the water if I’d had to deal with such a big group,” Verstappen quipped.

But SailGP has been working hard to align itself with F1, at least in the public’s eye, pointing to its common use of technology and data to gain edges over competitors. Both SailGP and the Oracle Red Bull Racing teams also share Oracle Chairman Larry Ellison’s deep pockets as a primary investor.

Light winds didn’t stop the US team from beating series leader Australia in a two-of-three match. The F1 drivers were on the US boat.  Courtesy SailGP

The sailing organization also call its hydrofoiling boats the F50, in deference to F1, and has changed the name of the helmsman, in traditional yacht-racing parlance, to driver. It’s also borrowed F1 graphics for its online racing coverage and adopted a forward-looking digital presence more in line with other professional sports.

“At the end of the day, we’re organized as a racing sport,” Jimmy Spithill, driver of the US team, told Robb Report. “I think the terminology is a natural progression of that. We’re experiencing similar things as F1, including risk and speed.”

After flying across the water at nearly 62 mph, accomplishing extreme turns, and having spray blown in his face that felt like pellets, Pérez was converted. “I’d seen it on television but didn’t think it was that challenging,” he said. “It didn’t seem like an extreme sport. But I saw the intensity of the team as they moved around the boat.  It’s demanding. They clearly have the world’s best drivers—like Formula 1.”

Pérez at the training machine for the grinder, the sailor responsible for shifting the boat’s sails.  Courtesy SailGP

Australian driver Slingsby, whose team currently leads the series, chimed in that SailGP was indeed an extreme sport, but the day’s light winds stopped them from demonstrating its true potential. “If we had a bit more wind, we could’ve showed them some crashes on the water,” he said.

The US team, which has so far had a dire season, won two out of three races against series leader Australia, despite Slingsby noting that the Aussies “were going in [the races] with gloves off.”

The big question on everyone’s mind was who won on the water, Verstappen or Pérez? That question may have to wait for another match-up since the F1 drivers rode separately on the US team’s boat. “We both had a lot of fun,” said Verstappen. “It’s not always about competition.”