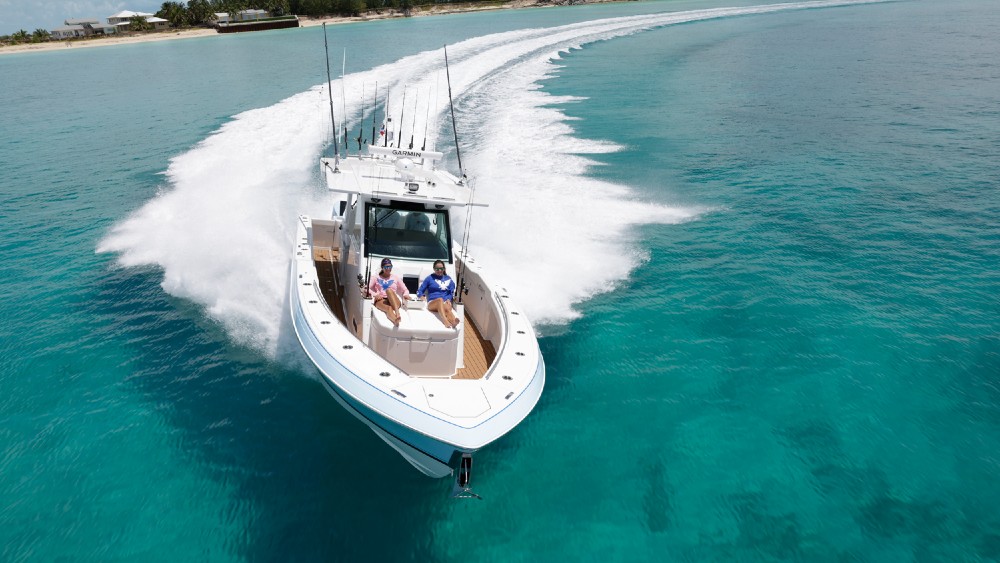 Formula has always had offshore performance in its DNA, starting from the first boat the legendary offshore racer Don Aronow built in 1962. The Porter family acquired Formula in 1976 and initially stayed with go-fast boats. In the last few decades, however, Formula has focused on luxury cruisers of different styles but always with an eye on performance. Given the current appetite for large center consoles, it was inevitable that the builder would fashion its own, designed around luxury and speed. The new 387 CCF is a fresh take in the center-console world, with a fast, double-stepped hull that signals the go-fast gene has been successfully handed down.

Formula actually offers two versions of the 387—the CCS (with “S” standing for sport) model is for people who want a fast and agile cruiser, with a focus on comfortable seating. But the CCF was designed with the original center-console intent: “F” is for fish. The boat is tournament-ready for the hardy few who opt for a center console over a more traditional sportfisherman but also has the creature comforts for a group of friends or family who want to throw out some lines on a weekend cruise.

The 387 CCF comes standard with 18-foot outriggers and twin 90-gallon fish boxes. An optional rod holder package boosts the number of rocket launchers on the boat from 20 to 32. Multiple tackle-stowage drawers and a bait-rigging station aft of the center console round out the offerings.

The outboard options include triple 450hp Mercury Racing 450Rs, a package that offers the fastest speeds, and twin 600-hp Mercury Verados. The twins have a lower profile for less interference with the lines. With the triple 450Rs, the 387 has an impressive 61-mph top end, while cruising economically at 38 mph on its smooth-riding, double-vented hull. That’s fast enough to comfortably do breakfast in Miami and lunch in Nassau, Bahamas.

The 387 has workable accommodations for those who want to sleep onboard once they reach the destination. The cabin has 6’4” of headroom, sleeping accommodations for two, an enclosed head, and a 33-inch television. There’s also a small galley. An 8,000 Btu air conditioner comes standard, but an optional 18,000 Btu unit will work better in warmer climes.

For a first-time venture into the center-console market, the 387 CCF is impressive. What you’re getting is a sporty open boat that’s large enough to handle most sea conditions offshore, but also the ability to throw out multiple lines when the fish are striking.