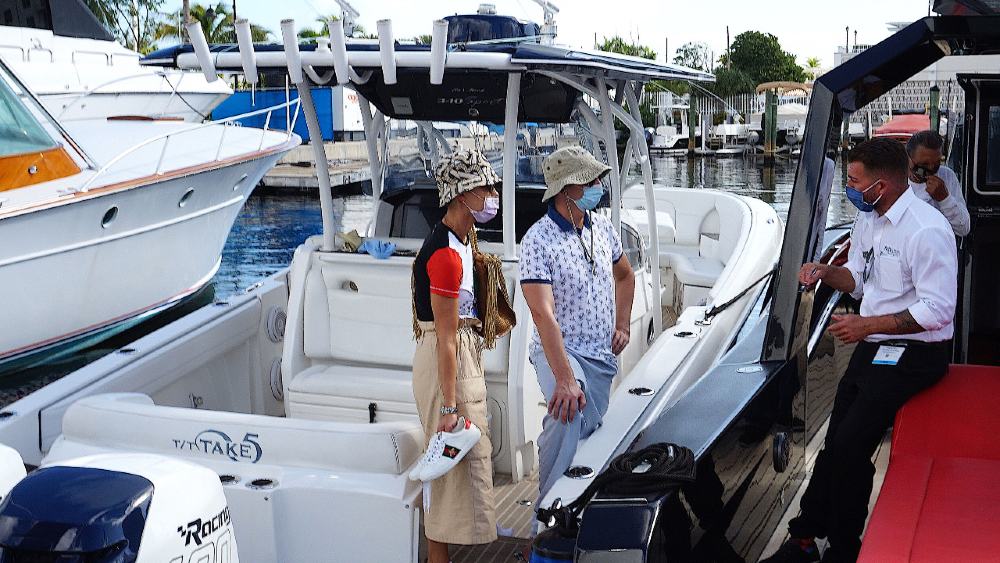 There were plenty of empty slips at the Bahia Mar marina and, in the cavernous exhibition tents, quiet booths. Certainly fewer visitors were strolling the docks. Still, Covid-19 or not, this year’s Fort Lauderdale International Boat Show is being hailed as a success.

The “quality over quantity” description organizers forecasted on opening day was more than marketing hype. It turned out to be true. By the end of FLIBS’s five-day run yesterday, exhibitors reported many sales of the new yachts, center consoles and marine equipment on display.

“We debuted our [88-foot explorer] 27E yacht at the show and had a contract the first day,” says Sally Doleski, vice president of marketing for Ocean Alexander Yachts. “We brought seven boats in total, and the interest from qualified buyers has been outstanding.”

The crowds were much thinner than a typical Fort Lauderdale event, but many builders report that they were in a purchasing mood.  Courtesy Informa/Forest Johnson

“By the end of Thursday, we had two boats sold,” Sabrina Fernandez, marketing manager for Azimut Americas told Robb Report. “The number of serious buyers making appointments to tour our new Magellano 25 Metri has really been remarkable.”

Fernandez ascribes the seriousness of this year’s buyer to a kind of Covid-19 cabin fever. “I think that throughout the months of lockdown, people have been dreaming about a new boat to escape with their families,” she says. “FLIBS proved a perfect opportunity for them to comparison-shop the different brands and make the move.”

The global boatbuilding industry has been one of the unlikely winners during this time of Coronavirus. As one of the few pastimes that fosters both privacy and fun, first-time buyers have been snapping up anything that floats, from large semi custom yachts to smaller bowriders. Info-Link, which tracks new-boat sales, reported last week that 33 percent of boat buyers in September were first-time boat owners. The boating industry has never seen numbers like that.

Despite the humorous signs, social distancing and mask-wearing were enforced during the show.  Courtesy Howard Walker

Despite calling it the “world’s largest in-water show,” organizer Informa Markets also described FLIBS as the world’s first “safety first boat show.” The organizers put great effort into making the venue as safe for attendees as possible. Walking the show’s aisles and spritzing disinfectant were dozens of “sanitizer” teams; signs on the show floor urged show-goers to “Keep a Fathom Apart”—six feet in nautical speak—and there were reminders everywhere to “Wear a Mask.” Red-shirted “safety ambassadors” and black-masked police officers also enforced the rule.

On top of the Covid regulations, this year’s show also had a different layout. The Fort Lauderdale Convention Center, where the smaller boats are typically exhibited, is still shuttered for renovation, so many of the center-console fishing boats were on display at the main Bahia Mar show site. With fewer vendors in the big tents—especially European designers and builders that typically filled the Superyacht Pavilion—the tent sides were removed and the spaces were instead used to showcase dozens of center consoles.

The smaller crowds also had another benefit: more space on the widened docks, easier access to boats, and fewer people in the tents.

“You could argue that FLIBS had become so massive it was almost overwhelming,” says Doleski. “This reduced size and everything being in one location definitely made for a more pleasant experience for everyone.”

More than 20 new boats made their show debuts at FLIBS, including Viking Yachts. The New Jersey builder unveiled its new 54 Convertible, which not only sold on opening day, but received the “Best in Show” award.

Viking Yachts reported that it wrote a contract for its new 54 Convertible on the first day of the show.  Courtesy Informa/Forest Johnson

While it didn’t garner an award, Azimut’s new Magellano 25 Metri was also a contender. The 82-footer came from the drawing board of naval architect Ken Freivokh, while the interior was designed by Vincenzo De Cotiis, an Italian who is known for his residential interior design in Italy.

The 25 Metri’s extensive use of carbon fiber, contemporary interior, active sanitizing system (similar to the one NASA uses on its spacecraft) and a huge bank of batteries to reduce the need for generators, this $5.4 million explorer was one of the most popular launches at the show.

Breathtaking in a different way was the quirky Prestige X70, which also made its show debut at FLIBS. The 70-foot “crossover” yacht had an unusual profile and an unusually large beach club, but the real differentiator was the fact that designers left off the side decks, so the interior was supersized.

Benetti’s Delfino 95, for sales for $11.1 million, also made its US debut at FLIBS. Representatives from the Italian yard expected to find a buyer by the end of show. “We were on the fence about coming to FLIBS until about six weeks ago,” said Nick Bischoff, country manager of Benetti America, reflecting the mixed views of many yacht builders about attending the show.

In the end, Bischoff says the superyacht brand was glad it made the decision to attend. “This show has surprised everyone as just how much of a success it’d be,” says Bischoff. “After months of Covid-19, I think many people were just ready for a boat show.”