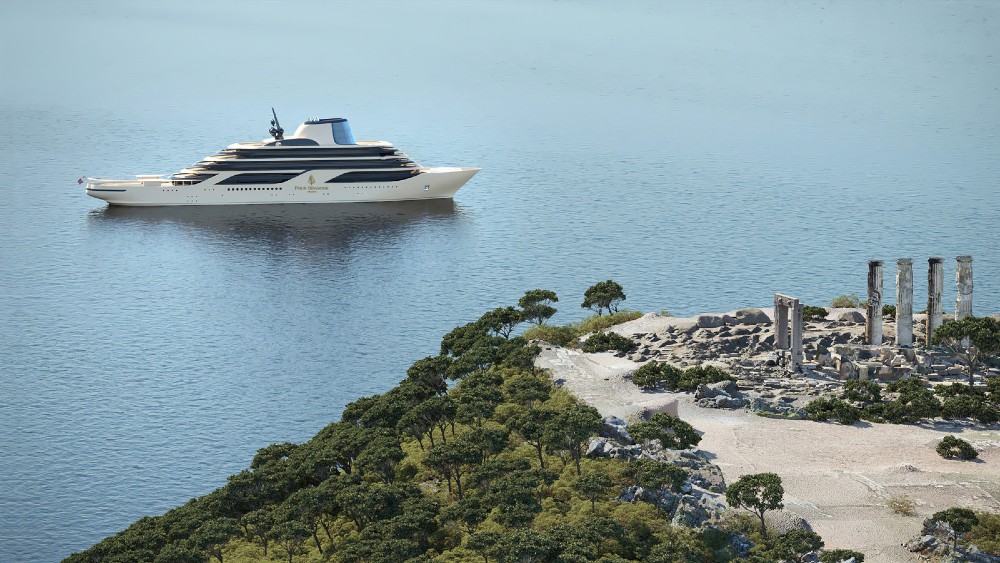 Four Seasons hopes to redefine luxury charter with its new “yacht,” a 679-foot vessel with a profile reminiscent of a contemporary superyacht, but with many more decks and a “funnel” at the top resembling the smoke stack of a 1930s ocean liner. But on this new vessel, the funnel contains four decks of suites equaling 9,600 square feet.

The luxury hotel brand made the announcement at Monaco’s Musée océanographique on the first day of the Monaco Yacht Show. The new, and as yet unnamed concept, would dwarf even the largest superyachts in Monte Carlo’s Port Hercule harbor.

Clerc told Robb Report that the yacht concept, which has been in the works for two years, came partly as a result of the Four Seasons Private Jet program, which brings its members to different parts of the world on a converted, 48-seat Airbus A321neo-LR. “We have an incredible 30 percent return rate from those trips,” said Clerc. “It’s one of our most important touchpoints for the modern Four Seasons brand.”

The new yacht is designed with 96 suites, which start at 581 square feet. These can be transitioned to 56 larger suites through a series of modular sliding walls. Clerc said whole decks can be converted to private residences for families or individual groups.

The experience will certainly be different from chartering or owning a private superyacht, which typically sleeps only 12 people, with a crew catering to the group for the week. Itineraries on superyachts are also flexible.

The Four Seasons group also plans for its yacht to be the antithesis of a typical cruise ship in which activities are scheduled well in advance. The experience, says Clerc, is designed to be flexible and tailored to the client, with an emphasis on top service and luxury. The vessel will have 11 restaurants, a swimming pool on the long stern—reminiscent of a trend in current yacht design—and a “transverse” marina in which the sides of the center fold out like wings over the water to become a large beach club. The yacht will have two tenders for private use while in port.

The company says its relatively smaller size, compared to traditional cruise ships, will give it access to areas where cruise ships are forbidden.

It’s not clear how, depending on a given week, 112 to 196 passengers will experience the same levels of intimacy as a conventional yacht. Clerc says the 1:1 ratio of crew to guests as well as the private setup will add to the experience. “It’s going to have the lowest density out there on a space-per-person basis,” he says. “We’ll also have an itinerary created just for each client. So if you’re there with your family, you’ll have your own driver, restaurant experiences, etc. You don’t have to include other people outside your group unless you want to.”

“When you’re on a superyacht, you’re a bit at the mercy of the crew who have multiple jobs, so the experience can range widely,” adds Marc Speichert, Four Seasons’ chief commercial officer. “What you get with us is the excellence of Four Seasons on a yacht.”

Per-person costs should be similar to chartering a 200- to 250-foot yacht, says Clerc, though a pricing schedule has yet to be finalized. Four Seasons will open booking late next year for the boat’s 2025 summer launch. The vessel is expected to cost about $1.16 billion, or an average of $4.35 million per suite.

Fincantieri, an Italian shipyard with experience in commercial ships, superyachts and military vessels, will be the builder. The build schedule will include three vessels. More will follow during a 15-year period, said Larry Pimentel, CEO of Marc-Henry Cruise Holdings. Pimental’s firm is in charge of sales, marketing, marine and technical operations, while Four Seasons is in charge of the guest hospitality experience on the vessel and on land with shore experiences.

Despite the Four Seasons name, Marc-Henry is a partner. Nadim Ashi and Philip Levine, Marc-Henry’s co-owners, were the originators of the yacht concept. “There will be nothing like it on the water,” Levine said at the press conference.

The Four Seasons vessel is joining competitor Ritz-Carlton’s Yacht Collection. The hotelier announced plans five years ago to move into the yachting sector, though the vessel launch has been delayed by two years. Ritz-Carlton said Evrima, the first vessel of its long-delayed Yacht Collection, completed sea trials in June.

Four Seasons is also currently going through a rebrand called “Luxury is Our Love Language,” based on stories gathered from guests. “It’s all about creating a meaningful sense of belonging through the elegance of empathy,” said Speichert, adding that its new yacht collection should be a concrete example of the rebranding effort.