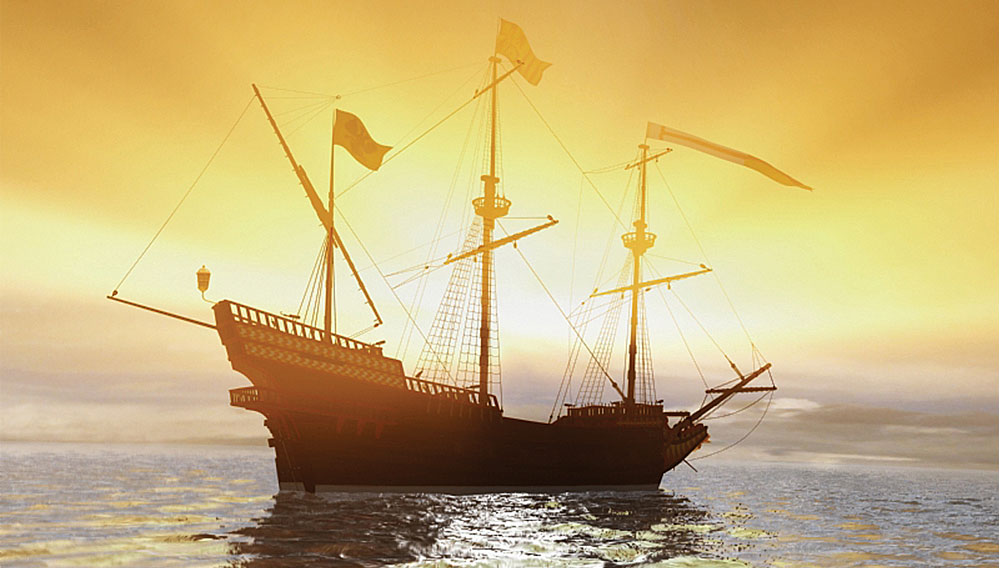 On May18, 1622, aboard the Spanish galleon Nuestra Señora de Atocha, a group of men gathered around a dying soldier named Juan Nuñez de Nodal. As the ship creaked among the swells on its way to Portobelo, a colonial outpost on the eastern coast of Panama, its ailing ensign dictated his last will and testament, leaving his worldly goods to his wife and children. “Being ill of the body and healthy of spirit … I enter that which is created and possessed [by] the sainted mother Catholic Church of Rome,” said de Nodal to his scribe. “And if God is served and if I die on land, I ask that my body be buried in any parochial church in the place where I may die … and if [I pass] away at sea, do with me as is accustomed.”

The nine witnesses who signed this hastily scribbled document had come a long way. Their ship was one of 28 in Spain’s Tierra Firme flota, or Mainland fleet, which formed part of a complex system of convoys that carried the spoils of conquest from the Americas and Asia along two routes—the Carrera de Indias and the Galéon de Manila—back to the port of Seville, where the Spanish crown received its quinto real, or royal fifth. These seasonal expeditions began in the late spring, when the Atlantic seas were calm. For protection against the Dutch and English, the fleets sailed together to the New World, then dispersed to their individual destinations: the New Spain fleet to Mexico, the Honduras fleet to Trujillo, and the Mainland fleet to Panama and Colombia. By late July or early August, the ships regrouped in Havana, Cuba, to organize their cargoes of gold bullion and ingots, silver coins, copper, emeralds, pearls, tobacco, and indigo for the voyage back to Europe. Typically, the two most heavily armed galleons carried the prized payloads: One, the capitana, would sail at the head of a particular fleet, while the other, the almiranta, would protect the rear. In 1622, the Nuestra Señora de Candelaria served as the lead ship and the Atocha as rear guard of the Mainland fleet, which included another treasure-laden galleon, the Santa Margarita (rendering shown), a solid gold chalice from which is offered as one of this year’s 21 Ultimate Gifts.

Six days after de Nodal’s will was drawn, the Atocha reached Portobelo, and the manuscript was likely placed aboard another ship bound for Spain. The almiranta remained in port for about two months, awaiting a cargo of silver from Peru, before departing for Cartagena, Colombia, on July 22 to fill its coffers further. The journey had been a profitable one: When the Mainland fleet convened in Havana, the value of its haul, according to some estimates, was the equivalent of approximately $400 million today. Yet the good fortune that favored the flota abandoned its members as they set sail for home on September 4—six weeks behind schedule—into the heart of a hurricane.

Beneath blackened skies, raging winds and massive waves separated the fleet, capsizing the Nuestra Señora de la Consolacion and mercilessly driving the Atocha and the Santa Margarita onto the reefs of the Florida Keys. The Santa Margarita shattered in the shallows, leaving a trail of debris like scattered bones in its wake, while the Atocha’s crew plunged its anchors into the angry sea in an attempt to stave off disaster. But a towering wave washed over the galleon, cracking the main mast and crushing the vessel against the reef. Water rushed into the hull of the ship, which rapidly sank—along with the treasure that for centuries consumed the dreams of salvagers.

One vestige of that voyage, however, did arrive safely in Spain: Juan Nuñez de Nodal’s last will and testament, which now resides in that country’s national archives. No record indicates whether the ensign was buried in a church as he wished, but the lists of those who died in the wreck confirm that seven of his nine witnesses were indeed buried at sea. The remaining two men were not among the five survivors who clung to the broken mast until rescue came; and so the details of their fates—whether fair or foul—went down with their comrades.