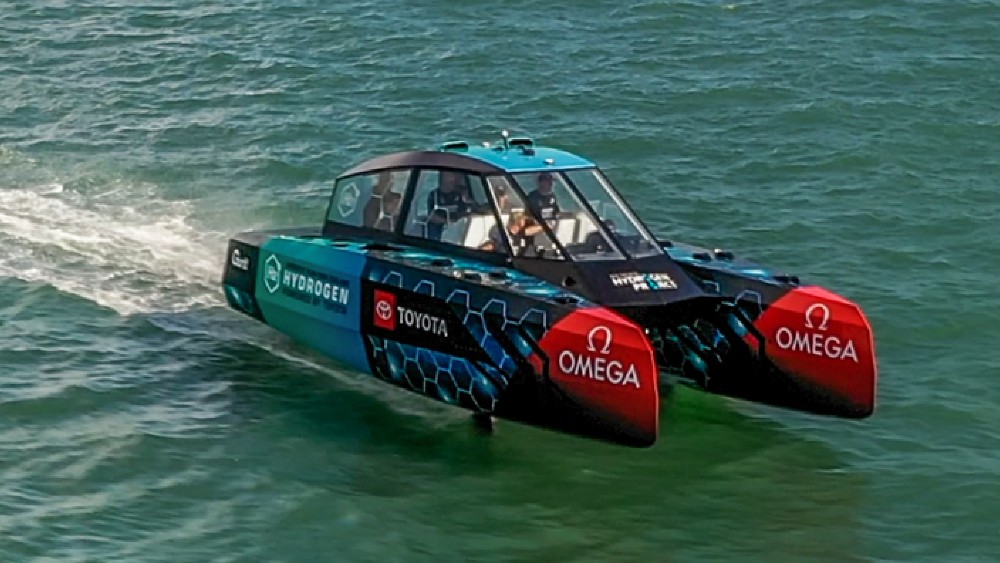 You’re looking at what could become the sportboat of the future: a sleek foiling power catamaran that can glide over the waves at close to 60 mph without burning a single drop of gas. And emit only harmless water vapor from its exhausts.

What sounds like a fantasy, sci-fi vessel has been skating across the Auckland waterfront for a few weeks now. How’s that for an Earth Day boat?

What is the secret? An advanced hydrogen fuel cell that can generate enough juice to power twin 295-horsepower electric motors—and take this 33-foot cat over 100 miles at a 40-mph cruise speed.

Team New Zealand’s technicians preparing Chase Zero for the initial launch. The boat has been performing well during its first three weeks on the water.  Courtesy ETNZ

Meet Chase Zero, the newly launched high-speed chase boat being developed to support the America’s Cup-winning Emirates Team New Zealand and its bid to retain the “Auld Mug” in 2024.

“This is such a cool project. Yes, it’s very much a prototype, but our hope is that it will lead the way by setting the foundations for a seismic shift towards a cleaner, more sustainable future of powerboating around the world,” Dan Bernasconi, head of design at Emirates Team New Zealand, tells Robb Report.

The hydrogen-powered chase boat will be used as a fast tender for the America’s Cup sailing race boats, which have been foiling for about a decade.  Courtesy ETNZ

Bernasconi explains that chase boats offer vital support during racing, being the first to respond if there’s a collision, capsize, injury or mechanical failure on the racing yacht.

“It means they have to be fast,” he says. “America’s Cup foiling catamarans can hit 50 knots, so a chase boat has to be able to keep up. So foiling technology, just like what we use on our raceboat, was an obvious choice to reduce drag, increase speed and extend the range.”

The 33-foot Chase Zero has an automotive-like profile with a flat stern. It steers via the rear foil.  Courtesy ETNZ

The cells—there’s one in each hull—convert the hydrogen stored in four onboard tanks into 400-volt DC electricity by passing the gas over a catalyst and combining it with oxygen from the air. The electrons it produces are then either stored in a pair of 42-kWh battery banks, or fed directly to the two 220kW/295hp electric motors.

In a clever piece of design created by the team, driveshafts run down the twin, forward-mounted foiling legs to torpedo-shaped Mercury Racing drives and propellers embedded within the foils. Steering is courtesy of a single, rear-mounted foiling leg.

So why not do away with the hydrogen fuel cells and simply stick with a big bank of batteries, as do the latest-generation of electric foiling boats, like the new Swedish-made Candela C-8?

Once the foils are dialed in, the foiling cat is forecasted to reach a top speed of 60 mph, with a cruising speed of 35 mph. All with zero-carbon emissions.  Courtesy ETNZ

“We did some rough calculations for a purely electric chase boat with batteries. But it was very evident early on that we couldn’t meet the range requirements of running over 100 miles each day at a typical 30-knot cruising speed,” Bernasconi says.

The design of Chase Zero started from the inside out. “We had to look at the space requirements for the fuel cells, batteries and hydrogen tanks,” says the designer. “Plus, we needed to accommodate a crew of six.”

The result is a speedy-looking cat with axe-style bows, stubby transoms and a decidedly sport-car-style cabin with a tall, raked-back windshield and sloping roof. Size-wise, it measures 33 feet overall with a 14.7-foot beam, and 7.2-foot draft. Overall weight is a meager 10,500 lbs.

The America’s Cup team partnered with Toyota for the fuel-cell assembly.  Courtesy ETNZ

Video of Chase Zero on its first sea trails in New Zealand show the cat’s twin hulls barely out of the water. Bernasconi explains that the team has been slowly increasing the computer-controlled height of the boat on its foils. Eventually it will run about four feet above the waves. “Obviously Chase Zero is very much a prototype. But now that she’s up and foiling, we’re looking at what is required to turn the prototype into a production boat,” says the designer.

Beyond the America’s Cup, the hydrogen-powered powerboat could have a much wider impact. “The project is all about proving how we can influence the global marine industry by building a prototype hydrogen-powered foiling catamaran,” says Bernasconi. “We hope Chase Zero signals the start of a hydrogen motorboat revolution.”