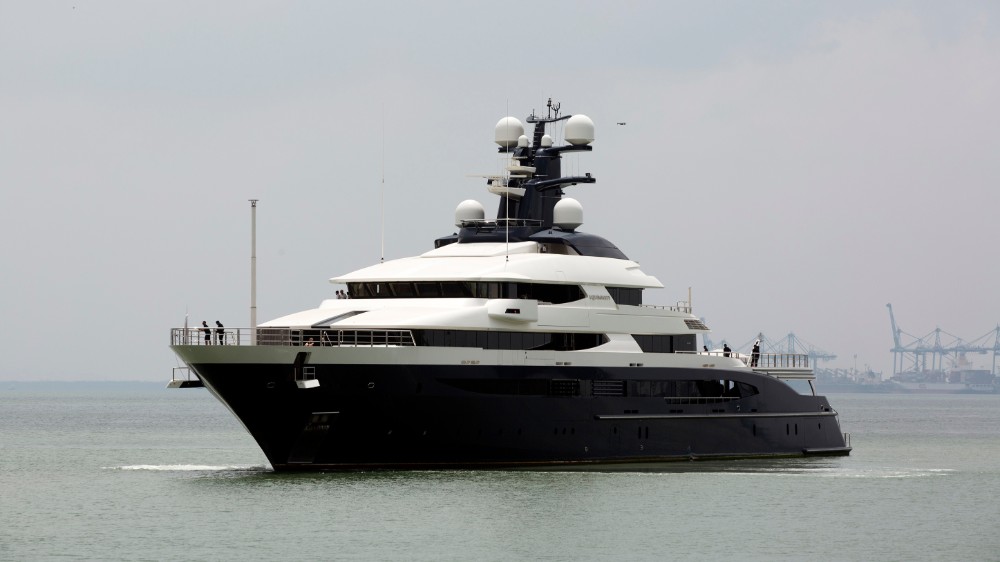 Now’s your chance to get a real bargain on a superyacht—that is, if you don’t mind a little scandal thrown in. Tranquility, a 300-foot boat once owned by fugitive financier Jho Low, is up for sale for the second time this year.

After a sun-drenched summer spent being chartered by celebrities, the controversial vessel is available for a cool $200 million, reports the Guardian. While the asking price is nearly $75 million more than current owners Genting Group paid for the yacht this spring—a figure Low blasted as “bargain-basement” at the time—it’s still quite a discount compared to the $250 million the Malaysian businessman reportedly paid for it in 2014.

Previously named Equanimity, the boat was owned by disgraced Malaysian financier Low Taek Jho, better known to the world as Jho Low, until it was seized by Indonesian authorities off the coast of Bali in 2018. This April, the Malaysian government sold the boat to Genting for $124 million in an attempt to recoup losses from the 1MDB financial scandal in which Low is implicated. The financier is accused of having been a key player in a scheme to launder billions of dollars from the country’s state investment fund. Low, who is believed to be in hiding in China, has denied any wrongdoing.

Built by Dutch shipbuilder Oceanco, with an interior from British firm Winch Design, the yacht is just one of many extravagant purchases Low allegedly made with money plundered from the fund. The boat features 11 guest cabins, can host up to 26 passengers, and has room for a crew of 31, according to the sales listing on Camper & Nicholsons’ website. Other amenities include a gym, massage room, Perspex-encased grand piano, jacuzzi pool, sauna, a fully equipped salon and a “beach club.”

Since Genting purchased the boat this spring, it’s been available for charter for $1.23 million (€1.1 million) per week, according to CNN. In August, reality TV star-turned-beauty mogul Kylie Jenner celebrated her 22nd birthday on board the ship with friends and family.

In addition to the superyacht, Low is accused of splashing his money on all manner of lavish purchases over the years, including properties around the world, art by Picasso and Basquiat and helping fund Martin Scorsese’s 2013 movie, The Wolf of Wall Street. Last year, producers of the Leonardo DiCaprio-starring flick paid the US government $60 million after being implicated in the 1MDB scandal.