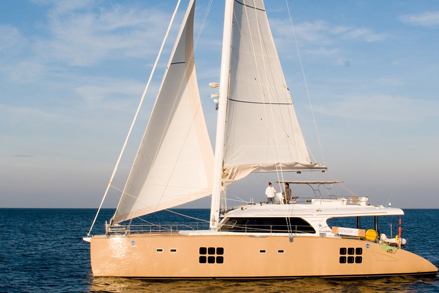 One doesn’t generally think of Poland as a hotbed of yacht building. But Sunreef, which manufactures large power and sailing catamarans, is the exception. The shipyard’s owners are French, and if there’s one thing the French do exceptionally well, beyond wine and cheese, it is sailing catamarans. The 70 Seazen made its debut at the Miami International Boat Show in early February. Its twin-hull configuration automatically gives owners and guests twice as much space to spread out in true comfort, either on the hulls, in the cockpit, or the large salon. The cream-colored yacht’s interior was designed to convey Japanese minimalism with light-colored woods and fabrics and touches of red decor, tatami mats, and shoji screens.

The 70 has four staterooms with the two at the stern featuring rear-racing windows that offer plenty of natural light and the ultimate waterfront view. Because of their inherent speed and space, large catamarans are considered the playboys of the yacht world. This one has a full arsenal of toys, including a WaveRunner, two dinghies, scuba equipment, wakeboard, and water skis.  Of course, the sleek cat is also a joy to sail, fast and steady. (www.sunreef-yachts.com)