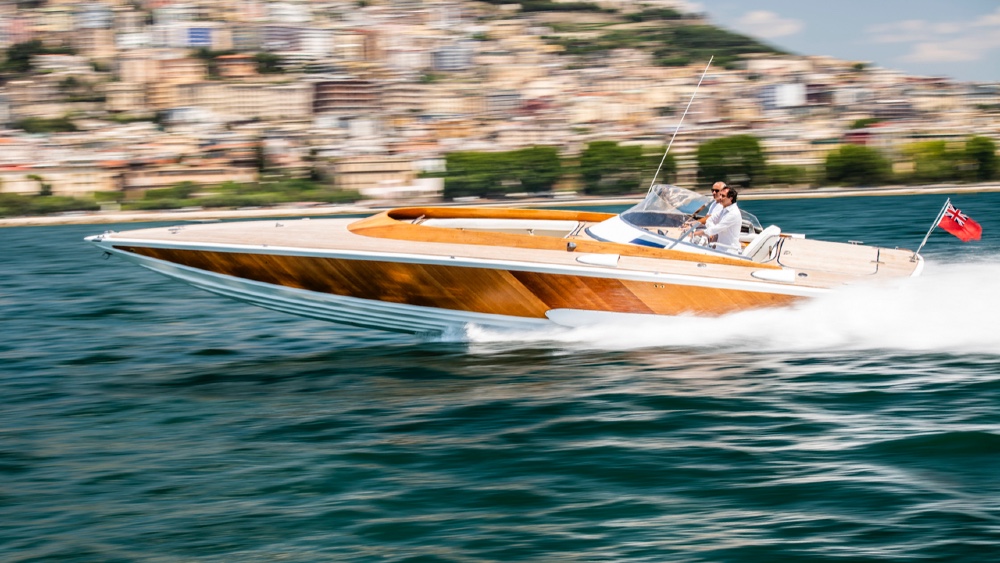 Back in 1968, this was the dream boat of Italian billionaire playboy, style icon and Fiat president Giovanni “Gianni” Agnelli: a super-sleek 37-foot wave-piercer that could tear-up the French Riviera at 50 knots, or an unheard-of 58 mph.

Powered by a quartet of Italian-made, 8-liter BPM Vulcano V8s delivering a combined 1,280 horsepower, the thundering G.Cinquanta came from the drawing board of go-fast-boat legend, Renato “Sonny” Levi. The boat’s look, speed and throaty roar were way ahead of their time—at least 20 years, in fact, up to the point when the Miami Vice era saw performance boats reach their peak.

This week, for the first time since being launched in 1968, this iconic speedster found a new buyer. As part of RM Sotheby’s high-profile “Open Roads” online auction, it sold for an impressive €375,000, or $433,740 at current exchange.

– Because the boat has eight throttles–four for shifting and four for acceleration–Gianni Agnelli wanted his own driver’s cockpit.  Courtesy Remi Dargegen/RM Sotheby's

The name G.Cinquanta defined what this sea screamer was all about: G for Gianni, and Cinquanta, or Italian for 50, as in the boat’s fearsome top speed in knots.

When it was launched 52 years ago, one Italian yachting journalist wrote that it was the perfect boat to watch offshore powerboat racing. How come? “It could not only be there at the start, but could get to the finish line in time to watch the winners arrive.”

Agnelli reportedly loved the boat and spent plenty of time aboard. In his first year of ownership, he covered over 2,000 miles, rushing between Cannes and St. Tropez, or east along the Italian Riviera to San Remo. Typically just for lunch.

An original 1968 image of the boat with Agnelli at the helm. The sleek hull and 58-mph top speed were several decades ahead of their time.  Courtesy Remi Dargegen/RM Sotheby's

The man they called L’Avvocato, or lawyer, kept it for seven years before gifting it to a family friend and fellow sailor, who has maintained it in truly immaculate, money-no-object condition ever since.

G.Cinquanta looks as good—arguably even better—today than it did a half-century ago. Throwing-up a rooster-tail of spray at 50 knots, the boat still oozes Italian style. Its exaggerated deep-V hull with the needle-like bow, was one of the finest–and fastest–designs to come from Sonny Levi’s drawing board.

Back in 1968, the boat broke all the rules. Levi designed G.Cinquanta with not just one, but two cockpits. The forward one with bench seats for guests and the rear exclusively for the driver, who had to use eight levers to control the boat—four to shift gears, and the other four for the throttles.

Built before fiberglass was used in production boats, G.Cinquanta has a mahogany-planked hull with a varnished veneer exterior. The owner spared no expense in keeping the boat in shipshape condition.

While Levi came up with the hull and deck design, Agnelli asked Sergio Pininfarina, his good friend and legendary car designer, to finesse the twin cockpits and small V-berth cabin under the foredeck. As for the layout of those four thundering V8s, Levi placed them in different locations. The forward two are mounted ahead of the rear cockpit and the others are mounted at the stern, just ahead of the transom.

G.Cinquanta was built at the Cantiere Delta yard in Anzio, 40 miles south of Rome. In the days before large-scale fiberglass production, the hull features four layers of diagonally-laid mahogany planking, glued with epoxy to give it the strength of steel. The sides are lavished in multiple coats of high-gloss varnish. As for that unusually tall, rounded windshield, when the boat was launched it didn’t have a screen. But after a few 58-mph runs, Agnelli complained about being wind-lashed and Levi came up with the solution.

Fifty-two years is a long time for original engines to keep running. That is why the current owner recently replaced all four motors with larger-hp BPM Vulcanos. Now, there’s a total of 1,440-horsepower, raising the top speed to 55 knots (63.3 mph). The new engines currently have less than 100 hours on them.

After 52 years, only the four V8 engines have been replaced. They were upgraded to larger-hp motors that increased the boat’s top speed to 63 mph.  Courtesy Remi Dargegen/RM Sotheby's

RM Sotheby’s declined to reveal the identity of the buyer, though there will likely be a trip to Italy in that person’s future. As the listing made clear: “This lot will need to be collected in Naples, Italy.”

See a cool video of the boat below: