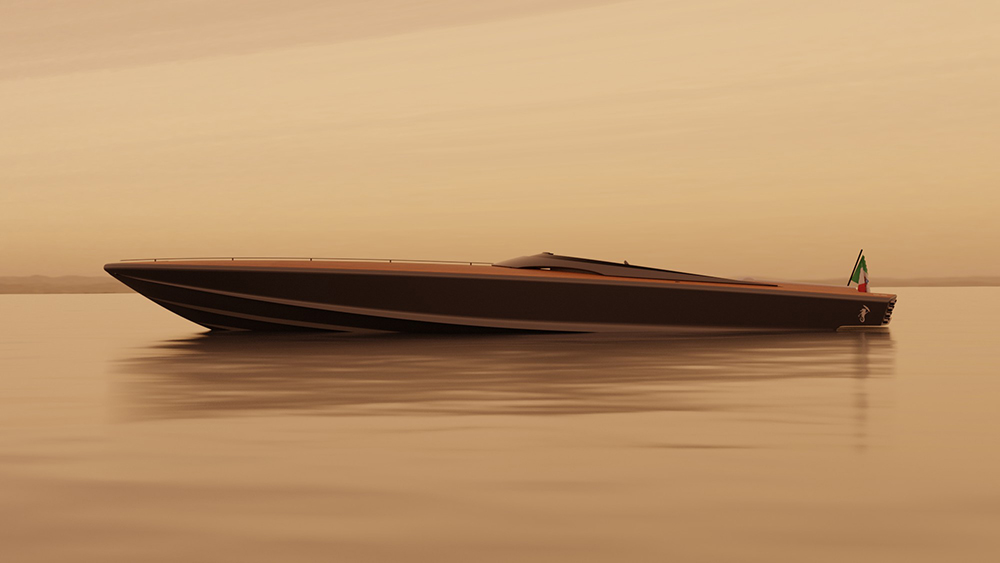 In 1968, Italian billionaire playboy, style icon and Fiat president Giovanni “Gianni” Agnelli made some serious waves with his super-sleek 37-foot speedboat G.Cinquanta. It became the dream vessel for marine enthusiasts the world over and remains one of the most iconic speedboats of all time. Now, after 50 odd years, the ‘60s classic has been reimagined for the 21st century.

The next-gen concept, dubbed G-Fifty, was penned by Renato “Sony” Levi of Levi Designs and Pasquale Mario Passalacqua of PMP Design. Levi designed the original G.Cinquanta and has managed to give the new vessel an equally elegant aesthetic. It sports the same aggressive lines and needle-like bow as the 1967 model but has been kitted out with the all latest tech and materials.

The most obvious change is in the construction of the exterior. Whereas its predecessor had a cold-molded deep-V hull with four layers of diagonally-laid mahogany planking, the modern speedster is crafted from carbon composite. This has all the strength of steel yet is extremely lightweight. The vessel also gained an extra 10 feet which gives her a total length of 47 feet and arguably a more commanding presence.

An original 1968 image of the boat with Agnelli at the helm. The sleek hull and 58-mph top speed were several decades ahead of their time.  Courtesy Remi Dargegen/RM Sotheby's

The new G-Fifty boasts more power, too. That’s quite an impressive feat considering G.Cinquanta’s performance specs are nothing to sneeze at. Powered by a quartet of Italian-made, 8-liter BPM Vulcano V8 engines, the vintage sea screamer could churn out a thundering 1,280 horses and hit a top speed of 50 knots. Version 2.0 eschews the four V8s in favor of two Mercury Racing engines that are available in various horsepower.

“With today’s more powerful engines it would be unthinkable not to fit a twin installation,” the designers said in a statement.

G-Fifty has an estimated maximum speed of 78 knots, which makes it the perfect go-fast boat to tear-up the French Riviera just like Agnelli did.

PMP Design is taking orders now for 2022 delivery. Pricing is available upon request, but be prepared to part with at least six figures. In fact, the 52-year-old G.Cinquanta sold for an impressive half a mil (€450,000) earlier this year at RM Sotheby’s “Open Roads” auction. Guess you have to pay to be a Playboy.