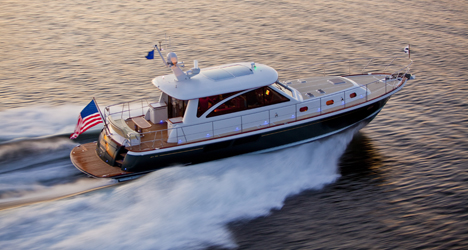 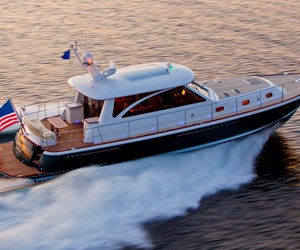 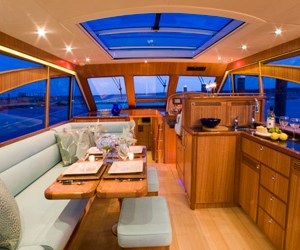 Hunt Yachts, which can trace its pedigree back to the first modern deep-V hull in the early 1960s, has engineered a leap forward with its new 52. Its first model, christened Godspeed, was launched in early May.

The 52 is the largest boat to date by the Rhode Island builder and is much more of a cruiser than Hunt’s smaller Surfhunter and Harrier lines. But the 52 shares a similar oceangoing deep-V hull design that C. Raymond Hunt brought to the market in 1960. That time-tested design allows the 52 to run well in virtually all sea conditions and, with its twin 705-hp C12 Caterpillar diesels, cruise efficiently at 25 knots. It reaches a top end of 35 knots. But the real secret to this yacht’s success is the single level, which allows the cockpit to join in an unbroken plane (most cockpit decks have steps up to the salon) with the salon for a social area, while also creating a tender garage at the transom. The 52 also has a social gathering place in the cockpit for alfresco dining as well as seating space in the salon for six during inclement weather. The boat comes in a two-stateroom version with the standard engine configuration, but with a new IPD pod propulsion system going into the third 52 on the production line, Hunt has space to build a third bedroom in back.

Godspeed is richly finished in cherry with granite countertops in the galley and head, though mahogany, teak, and chestnut woodworking and other stone counters are optional. The 52 is a head turner, with the pointed and upturned bow of a traditional down east hull for a more stable ride in rough waters (similar to the hulls Hunt builds for commercial pilot vessels) but with the soft, rounded exterior found on Italian motoryachts. The combination works well in this new departure for a very traditional American boat builder. (www.huntyachts.com, 401.324.4201)