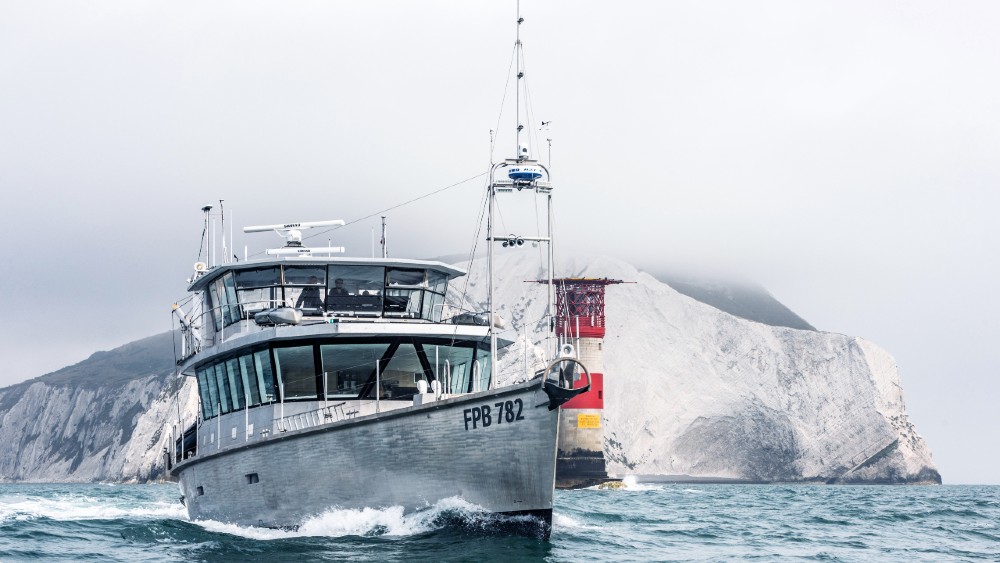 Some expedition yachts are built to look pretty. Others boast new technology. Grey Wolf is an outlier, created with a single mission in mind: to achieve long-distance cruising and access inaccessible areas, while igniting fire in the bellies of adventure-hungry travelers, including the owner.

The 78-footer is like an explorer that returns from the North Pole with frostbitten fingers, a gaunt face and icicles on the beard—as opposed to the tourist who does the trip on an “expedition” cruise ship, sporting a barely used, bright-colored parka and five extra pounds because the buffet was so good.

Grey Wolf has both the looks and chops to claim true explorer status. Her maiden voyage after launch in New Zealand was a cruise to New Caledonia, onto Fiji and Tahiti, across to Chile and down to Antarctica. Now, the owner of the salty, 78-footer has the Northwest Passage in his sights.

The boat has an industrial, almost commercial look, but its ice-class hull, long range and spacious interior makes it the ideal liveaboard vessel.  Courtesy Peter Watson

Designed by Steve Dashew as part of his Functional Power Boat (FPB) series, and built by Circa Marine in New Zealand, Grey Wolf has circumnavigated the world twice since her 2017 delivery. “Grey” represents the bare aluminum hull, which has been left unfaired for practical purposes. Plus, it just looks rugged, even cool. “Wolf” reflects the yacht’s wild, robust capabilities.

Her owner, Peter Watson, who previously owned a Dashew-designed FPB64, was intimately involved in Grey Wolf‘s build from the start. “A second FPB owner and I worked closely together on three hulls at the same time,” Watson told Robb Report. “Our goal was to be able to go anywhere.”

The boat’s attributes include an ice-class hull for navigating polar regions, long-range and economical cruising up to 5,100 nautical miles, and easy maintenance. Pressure washing the bare aluminum hull every year is a more practical and cheaper option than painting it every five years.

“The Great Room,” as Watson calls the main salon, is open, simple and comfortable, in keeping with the rest of the boat.  Courtesy Peter Watson

Grey Wolf has the highest safety rating of CAT O by the Maritime and Coast Guard Agency (MCA), meaning the boat is unrestricted on where it’s allowed to cruise. Watson likes the compact size, too. It keeps crew costs down, but more importantly, with a shallow 6.5-foot draft, Grey Wolf can anchor close to shore and access small ports where larger boats can’t.

Inside, three spacious ensuite guest cabins and panoramic windows offer views out to sea from every corner. Four crew are accommodated on charter, but as a qualified captain Watson often likes to take the helm.

Penguin mother and baby spotted on a trip to Antarctica.  Courtesy Peter Watson

Since qualifying as an ice pilot in Finland, he’s captained the boat to the Antarctic peninsula twice. He also cites a trip to the island of Vanuatu hidden deep in the Pacific Ocean as one of his most memorable moments. “We visited the volcano, saw some local tribal ceremonies,” he said. “The people are so loving and generous. It’s a place that feels truly untouched.”

Redundancy is a key part of Grey Wolf‘s design. The boat has two helms—one on the “Matrix Deck” or flybridge, the other in the “Great Room” or main salon, just forward of the dining area.

While that’s not unusual, Watson mandated numerous backup systems so Grey Wolf would never be stranded when a marine mechanic is thousands of miles away. “I steer by autopilot, but I can override that and electrically control the steering. If that failed, I go to hydraulic steering, and after that I’ve got a tiller,” he says. “I don’t think I’ll ever need four modes, but if I’m in the middle of nowhere with no support, I can get somewhere safe.”

During Covid when the world went dark, Grey Wolf largely stayed in port, except for a few  weekend trips to local islands. Since Watson spends around 50 percent of his time on board—including one nine-month stretch—the first year of Covid was taxing. His happy place is in the upstairs helm spotting wildlife. It’s an interest that peaked in Antarctica when a pod of orcas swam around the boat’s dinghy.

Beneath the surface on a charter.  Courtesy Gerald Schombs

“I was quite frightened because I thought they’ve only got to push this and we’ll be in the water,” he says. “But they were just amazing. A real once-in-a-lifetime experience.”

Watson designed Grey Wolf with adventure charters in mind, though he only allows two to three charters a year; this year, one lasted four weeks. The boat was due to explore Norway this summer, cruising through its northwestern fjords, though that was cancelled at the last minute.

Pristine and remote Vanuatu was one of the owner’s favorites.  Courtesy Peter Watson

Winter will likely see the yacht laid up—“it’s not really a Caribbean-style boat,” he says—but next summer, the plan is to head to Scotland, Norway, Svalbard and Greenland, before ticking off Watson’s bucket-list destination, the Northwest passage.

“It needs a lot of planning, but I want to bring a charter there,” he says, noting British Columbia will be the second stop on that trip. “They’re two places I’m keen to visit with Grey Wolf,” he says. “You can’t find many 78-footers that can reach those kind of remote areas.”