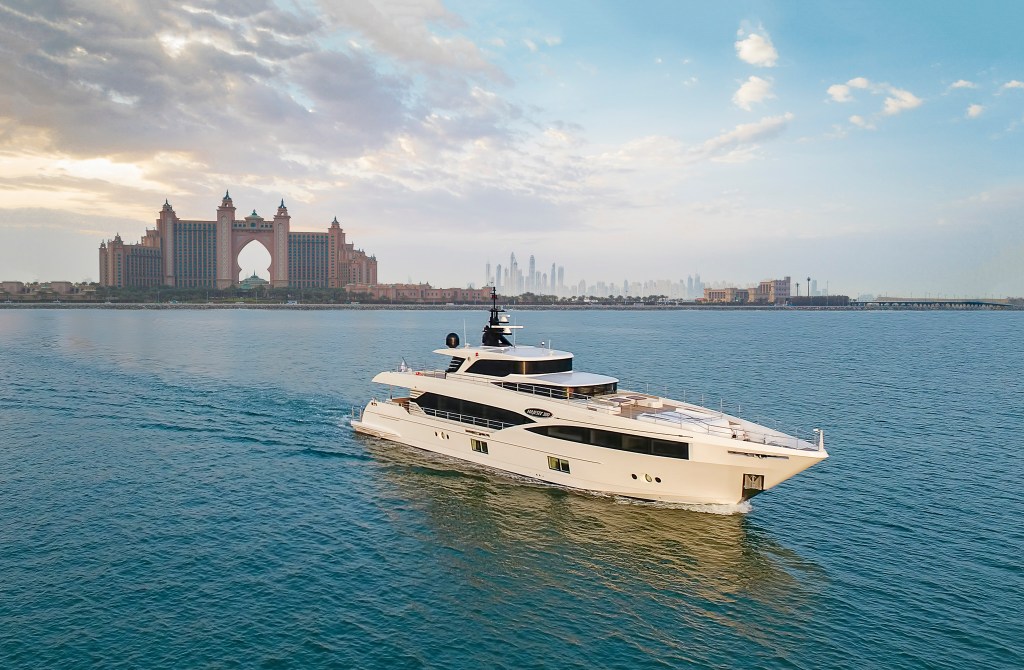 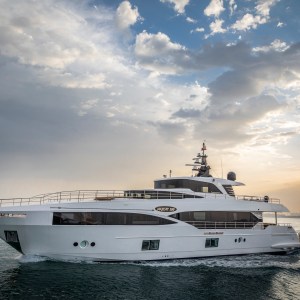 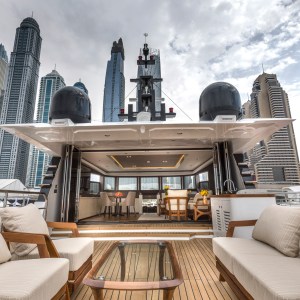 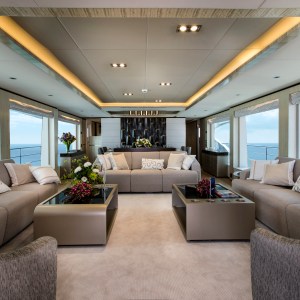 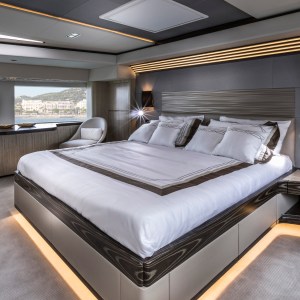 Nahar was delivered last month to an owner who has owned several Majesty yachts. This first Majesty 100 is Gulf Craft’s entry-level superyacht, but Nahar has gigayacht features that set it apart. The first is a skylounge on the top deck, which offers much more versatility than a traditional open flybridge. An enclosed space forward provides climate control for dining or entertaining. But its doors at the rear open onto an aft deck with wet bar, barbecue, and Jacuzzi, creating a spacious social area, both inside and out. Two balconies at the rear also allow for exceptional water views.

Just forward of the skylounge is the wheelhouse, where owners and guests can sit on the large lounges and converse with the captain while the yacht is under way. The foredeck also has a lounge and table just in front of the wheelhouse. It’s positioned far enough back so guests can socialize while Nahar is at anchor, without interfering with crew functions at the bow.

The main saloon feels like it should be on a much longer yacht, as well, thanks to its open-plan layout and the floor-to-ceiling windows that drench the interior in natural light. The formal dining area at the front is part of the room, but is discretely separated by a mahogany cabinet and beautifully crafted wall paneling that looks more like modern art.

Forward of the saloon, the full-beam master suite once again lends to the big-boat air, with its large windows, queen-size bed, and side chairs. Wood accents, a marble-top bed stand, and indirect lighting around the edges of the bed add elegance to the suite. The separate office, walk-in closet, and large en-suite bathroom also show just how much the 100-foot class has evolved in the last five years. Three guest suites—two doubles and the third with twin beds—comprise the rest of the accommodations. They all share the same levels of fit and finish as the master.

Nahar is powered by twin 1,900 hp MAN engines that deliver a top speed of 23 knots. At 12.3 knots, the boat has an impressive range of 1,050 nautical miles. The Majesty 100 also has fin stabilizers for the comfort of the guests, along with a remote-control steering system for simple docking. Majesty’s engineering department developed a sliding mechanism for lowering the tenders onto the water, a smart feature that makes it easier for guests to board the tenders. The boat will make its European debut at the Cannes Yachting Festival this month.