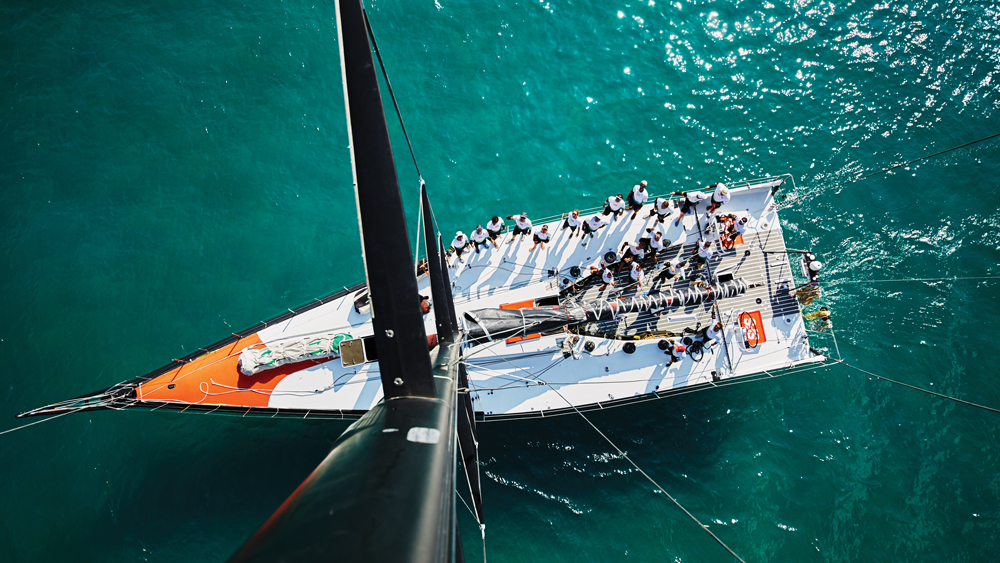 Before the starting gun sounded, Bella Mente and Proteus circled each other like boxers in a ring, each waiting for the other to make a mistake. As the first day of Maxi72 racing was about to begin, these archrivals in the top tier of the Les Voiles de Saint-Barth regatta—which took place over four days in April—were the favorites to win. Bella Mente, the winner of the last two Rolex Maxi72 World Championships, was coming off a triumph 2 months earlier in the Royal Ocean Racing Club Caribbean 600. But the crew of Proteus, last year’s victor here, was determined to defend its title.

The two boats, virtually identical designs distinguished from each other by their hull graphics and the different bands of color on their black sails, had engaged in a knock-down, drag-out battle in the RORC Caribbean 600. They exchanged the lead seven times during the 600-mile race, the first in the Maxi72’s seven-​regatta season.

The crew of Bella Mente made 85 sail changes, and at one point both yachts were in full sail, racing at more than 30 knots through a squall. Bella Mente ended up finishing 14 minutes ahead of Proteus. It was a sweet victory for the Bella Mente crew, especially after having had to retire from the race in 2016 with keel problems.

John “Hap” Fauth, 72, is the owner and helmsman of Bella Mente. In the Les Voiles event, he was focused on jockeying his boat into position at the start and never surrendering the lead during the 3.5-hour race. The founder and chairman of the Churchill Companies investment firm in Minneapolis, he has been sailing since he was 7 years old and has owned a succession of raceboats over the years. This is his third one named Bella Mente, which is Italian for “beautiful mind.”

As the crews awaited the firing of the starting gun, Bella Mente circled around the bow of Proteus, which was skippered by its owner, George Sakellaris (the chairman of Ameresco, an energy-services company headquartered in Massachusetts). Another yacht, Prospector, hovered nearby. When the gun sounded, Bella Mente was first over the line. Three hours later, Fauth and his crew of 19 had sailed a near-flawless race through the shifting winds and currents along the coast of the island to defeat Proteus by 1 minute, 14 seconds—or so it seemed.

When Fauth returned to base, he learned that Bella Mente had jumped the starting line by a half-​second. The infraction called for a 10 per­cent time penalty that cost the yacht 24 minutes and dropped it back to sixth place. “In 10 years of Maxi racing, I’ve been over the line early just twice,” said Fauth, clearly dejected.

“We absolutely had that race,” said Bella Mente’s tactician, Terry Hutchinson. “But we made a human error and have to be accountable. We’re not going to let it shake us for the rest of the week.”

At week’s end, Proteus was the overall winner. Prospector finished second, and Bella Mente was fourth. In May, the series moved to the Mediterranean for the Palma Vela regatta and then the final four races, including the Maxi72 Rolex World Championship, which will be held in September off the coast of Sardinia.

The Maxi72 class evolved 3 years ago from a previous generation of smaller yachts called Mini Maxis. The worldwide fleet of Maxi72s now comprises eight large, fast, and highly technical yachts designed to sail like much smaller racing vessels. “Bella Mente has the most advanced materials in today’s racing sailboats,” says Don Watson, the lead boatbuilder at New England Boatworks in Rhode Island, where Bella Mente was constructed. “[Its] Kevlar honeycomb-cored hull and Nomex honeycomb deck, with carbon-fiber skin and inner structure, make [it] incredibly light and strong.” Proteus shares the same build quality. Both yachts were designed by Judel/Vrolijk & Co., a naval-architecture firm in Germany.

“They’re very nimble and weight sensitive,” says Fauth of the Maxi72s. And they’re fast. The yachts regularly race at 30 knots and have been known to reach 38 knots.

The Maxi 72s have attracted owners, such as Fauth and Sakellaris, who love to sail and are good at it. They’re also willing to invest heavily each year in professional crews and technical enhancements to their boats.

The rules governing the racing class allow for structural modifications each season, so owners spend millions for new sails, keels, and various design changes to make their boats lighter and faster. (The allowed modifications exclude changes to the yachts’ length or draft.) Weight is critical; any extra pound above the waterline is considered the enemy. “We don’t carry a cushion on the boat, and for our offshore races, we have a small gas burner belowdecks to make hot soup,” says Fauth, who has won three Rolex World Championships, the first in 2012 in a Mini Maxi that also was called Bella Mente. “Other than that, it’s only the sails and crew.”

“We’ve chosen our crew very carefully,” says Fauth. “When we’ve replaced people, we’ve made sure to improve that position. These boats are very well sailed, so you need a professional crew. It’s all about execution on the racecourse. Amateurs just can’t compete at this level.”

The Bella Mente team comes together a week before each regatta and trains daily for 9 hours. In the evenings, a coach who has filmed the day’s practice goes over the footage with the crew. “We also have a data dump for all wind, current, and other measurements, which we review the night before a race,” says Fauth. “You have to be serious about it at this level.”

In addition to the sailors, the Bella Mente team includes support crews for carbon-fiber work and for the yacht’s hydraulics and sails. A chef and a chef’s assistant are also part of the team.

Fauth steers the boat for all inshore buoy races and longer coastal races. Sanderson relieves him at the helm for offshore races. “It’d be easy for [Fauth] to say, ‘Been there, done that,’ but he just keeps driving the sport forward,” says Sanderson. “He keeps the boat current. He knows he has to do that if he expects to do well.” The boat has changed keels and masts, and it regularly receives new carbon-fiber sails, which Hutchinson and Sanderson constantly tweak and upgrade to improve performance.

In their day jobs, Hutchinson and Sanderson work for competing businesses in the sail-making industry. “I’m not aware of any other situation like this in the racing world,” says Sanderson, the CEO of Doyle Stratis Sails in New Zealand. “It’s like getting two engine companies to share secrets for the benefit of a Formula 1 team. It just doesn’t happen. But we’ve learned to play to our strengths in the partnership and have developed some highly technical sails as a result.”

Proteus’s crew members are all successful professional sailors, and the boat is 2 years younger than Bella Mente. Its keel, rudders, masts, and sails have been constantly fine-tuned. “The boat goes through comprehensive performance analyses,” says Sakellaris. “We’re seeing improved performance with each race.”

The goal is to have the boat in peak condition in September for the season’s grand finale in Sardinia, the Maxi72 Rolex World Championship. “That’s the big race for everyone,” says Stuart Bannatyne, Proteus’s tactician. “That’s where all the new sails come out and the boats get into their top form.”

Fauth says that win or lose, he plans to retire Bella Mente at the end of this year. Will he have another Maxi72 built? “We’ve spent a long time building this crew, and it’s a really good one,” he says. “I’m not planning to retire anytime soon. I’d say there is probably going to be a new boat in my life.”