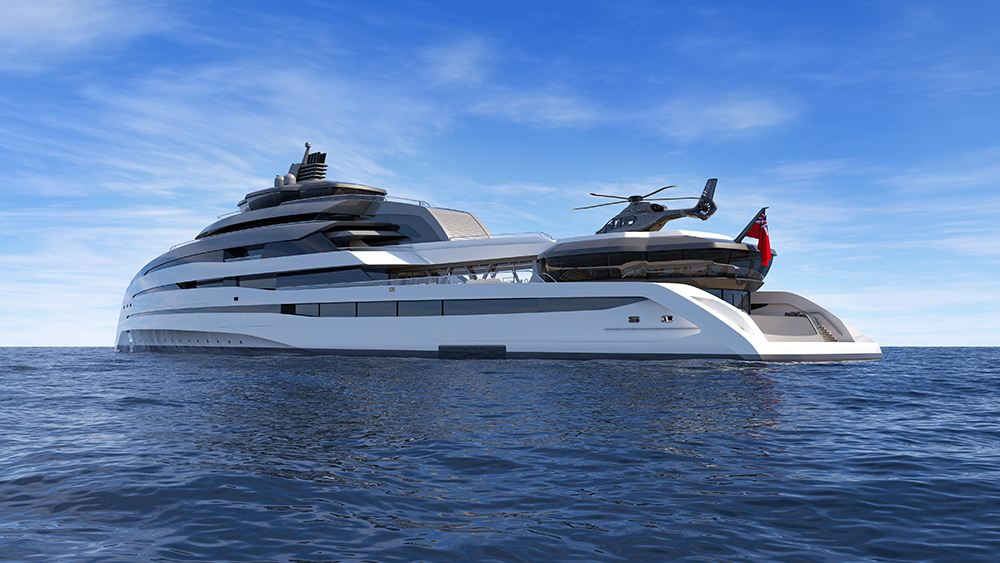 The new concept goes by the name of Rex—Latin, of course, for “king.” Quite fittingly, the 417-footer sports a regal exterior that commands attention on the high seas along with a royally good assortment of amenities.

The UK design studio penned the vessel for an exacting client who was craving “something different.” As such, all the typical superyacht features have been elevated for the upper crust.

Case in point: the princely owner’s suite. It comprises four private terraces, two jacuzzis and a private gym for its discerning occupant. The 10 guest suites, meanwhile, sit at the center of the yacht and each comes complete with its own terrace plus direct access to both the forward and aft atrium staircases.

Surrounded by glass, the 46-foot pool can be used in any climate.  Harrison Eidsgaard

While aboard, loyal subjects can expect to soak in some incredible seascapes. The yacht is crowned by the Panorama Lounge that offers 360-degrees views, an observation lounge with access to a jacuzzi, and a submerged space called the Neptune Lounge that offers prime underwater vistas.

Seafarers will also have access to an array of amazing amenities. Occupying pride of place on the main deck, there’s a 46-foot pool that can be closed off with glass to ensure you can still take a dip even in colder climates. There’s also a large cinema, a two-story gym and spa facility, as well as multiple lounges for chilling.

Elsewhere, there is a sizable helicopter hangar that can accommodate an Airbus A160 and also transform into a squash court when desired, plus another smaller helipad. The vessel is also fitted with a full-beam garage that can store a 49-foot expedition vessel and two 30-foot tenders, along with a large crane to assist with getting the toys into the water.

As for performance, Rex sports a significant hull chine and sharp bow for improved fuel efficiency and smoother sailing on rough seas. Harrison Eidsgaard envisions a hybrid propulsion package that could be converted to a hydrogen system in the future for true, zero-emissions cruising.

At first blush, Rex certainly deserves its title as King of the Seas.