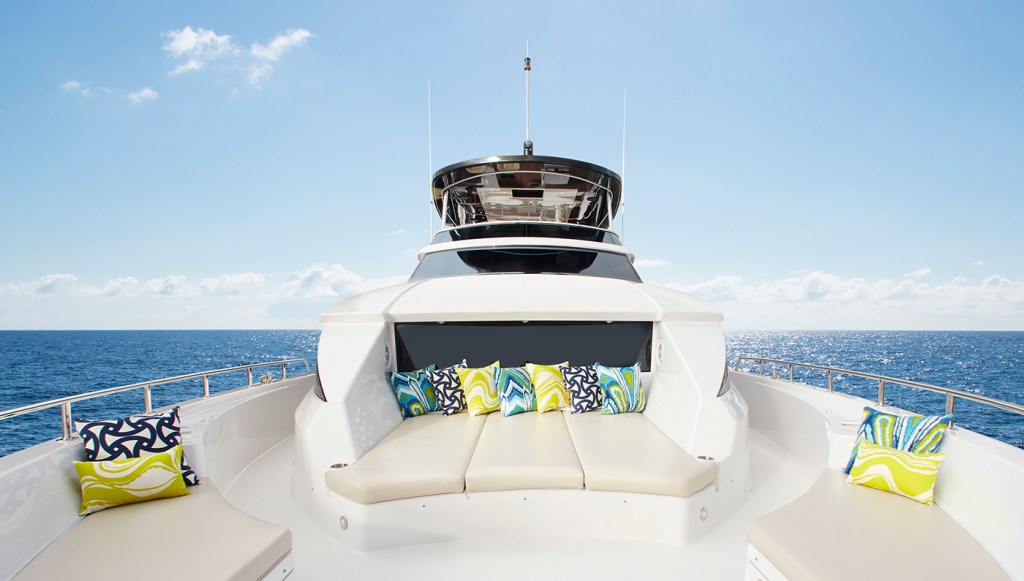 The new Hatteras 70 Motor Yacht combines a classic American profile with a European-style interior, a departure for the North Carolina builder. The lines of the boat, which has a nearly 75-foot overall length, are derived from the Hatteras 100 Raised Pilot House that launched in 2013 (designed by the Italian yacht designers at Enrico Gobbi’s Team for Design). The crisp, modern interior layout, decor, social gathering spaces, and flow of the Hatteras 70 is completely designed in house at Hatteras. It shares the same profile as its larger 100-foot sibling, with a long forefoot, tall superstructure, and a flybridge extending aft to the transom.

The forward bridge, under the hard top, features an enclosed lounge and tables for alfresco dining that face a cockpit bar with three stools. The aft section has been left wide open for tender transport or setting up a spacious sunning area. Just beneath the overhang is a shaded cockpit with another lounge. On the bow, a three-person sunbed, along with forward lounges, creates a third exterior social area.

The motor yacht’s hidden beauty is dramatically revealed in the interior. Hatteras decided not to include a lower helm station for the standard arrangement, opting instead to turn the main deck into a large saloon with the full-beam lounge sitting up against the windows at the front end. There is a center galley off to the side that leaves a clear line of sight from the back area (where there is another lounge) to the forward windows.

The wow factor, however, is the 9-foot-high atrium in the midsection, bathing the interior in natural light and transforming the space into a seaside loft; 450 square feet of open space is not only impressive but about the same size as boats 20 or 30 feet longer. With such a high ceiling and no lateral bulkheads, Hatteras had to throw out previous design assumptions to maintain structural integrity.

“We had to rethink the entire forward structure,” says David Brown, director of design and engineering. “We did additional finite element analysis and ended up reinforcing the area with multiple layers of carbon fiber. This new laminate allowed us to keep the very open feel.”

Owners have different options if they do not want the standard helm-less setup: They can choose to add a lower helm (while still keeping the atrium) or allow for the galley to be repositioned for adding a formal dining table. “Every option offers an abundance of natural light, so the open feel is not lost, only slightly altered,” says Cullen Moser, the 70’s interior designer. Moser opted for a mix of glass, leather, stained white oak, and polished stainless steel to keep the saloon simple yet elegant. These materials also appear in the full-beam master suite and three other staterooms belowdecks. The captain’s quarters is positioned at the stern.

The atrium concept is a game changer for Hatteras, which previously was considered a conservative boatbuilder, especially compared to some of its European competitors. Behind its aesthetics, the running surface of the new 70 is designed, like all Hatteras boats, for exceptionally smooth offshore sailing. The base price for the Hatteras 70 is $5,140,000. (hatterasyachts.com)