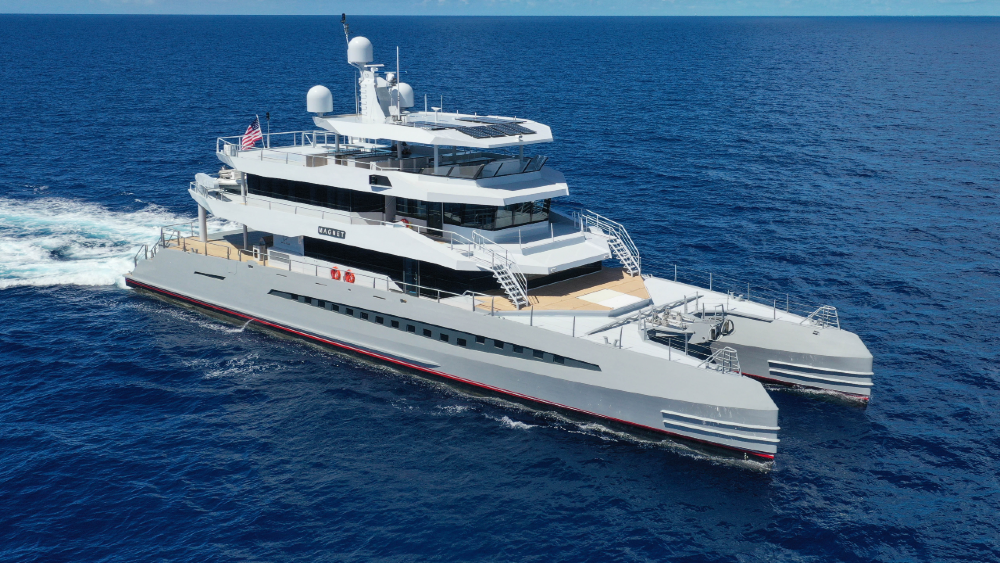 A Louisiana shipyard known for its commercial vessels has launched its first aluminum superyacht. Metal Shark recently launched Magnet, a 148-foot tri-deck catamaran that is the first of Metal Shark Yachts’ 48-meter series. Magnet was built for an owner from Miami who had worked with Metal Shark for the past 10 years.

“The owner had some unique visions for a yacht and we also had some visions,” Metal Shark CEO Chris Allard told Robb Report. “We were able to align those visions with a very new catamaran design.”

Owner George Wallner wanted a “serious, rugged and purpose-built vessel capable of reaching remote, unspoiled destinations that you cannot get to with an airplane.” He also wanted a vessel that could stay in those locations for extended periods, without having to rely on a large crew. “The catamaran format offers ample room and a uniquely stable vision for that,” Wallner said in a statement.

Metal Shark worked with Australia-based Incat Crowther, a specialist in offshore catamaran designs, on the hull design. The twin 148-footer, with twin 2,600 hp MTU diesel engines, can reach a top speed of 31 mph. At its most efficient cruise speed of 11.5 mph, the yacht has a range of 12,600 miles, or the equivalent of cruising from the US East Coast to the western shores of Europe and back again—twice.

Beyond its range, Magnet‘s exterior was designed very differently than others on the market. “When you’re in it, it feels like you’re in a high-rise apartment rather than a mechanical object,” says Allard. “One of our main disruptors is the cat hull. The other is Magnet‘s visibility—the glass-house feeling you get from the forward portion of the yacht. Allard says the pilothouse and main salon have 330-degree radiuses with no dead spots. “You feel like you’re in the environment around you rather than inside a yacht,” he says. “It really ups the game.”

Because it’s a catamaran, the interior has inherently more deck space than a monohull yacht of a similar size, while Magnet also has a submersible stern platform and aft-deck crane to launch and retrieve the yacht’s toys, tenders and any cargo.

The military-style exterior also gives a sense of its builder’s commercial roots. The stern has a submersible swim platform and crane for deploying the tenders and toys.  Metal Shark Yachts

Magnet‘s interior is currently being outfitted in Fort Lauderdale, with original artwork and décor. Allard says it will look more informal than other yachts its size, mostly because the owner wants to enjoy the surrounding views through the glass panels and not be encumbered with a heavy, formal interior. The twin hulls will create abundant space for crew quarters, a wine cellar and supply refrigeration for long-distance journeys.

The upper three decks are reserved for the owners and guests. The top-level sundeck has al-fresco dining areas, bar with refrigerator and icemaker and a forward-looking flybridge for sunset views. With 4,300 square feet of interior space, Magnet has a master suite, VIP cabin and three guest cabins.

Allard says the Metal Shark Yachts line can be fully customized for each owner. The builder also introduced the M30 (30 meters or 100 feet) and M70 (70 meters or 231 feet) in its new superyacht line.

“Magnet’s chiseled lines were inspired by our military patrol vessels,” says Allard. “The angular brown gives the yacht an imposing look, but it also shields the windows from the sun.” Allard added that this new superyacht style will “maximize the yachting experience by minimizing maintenance concerns.”