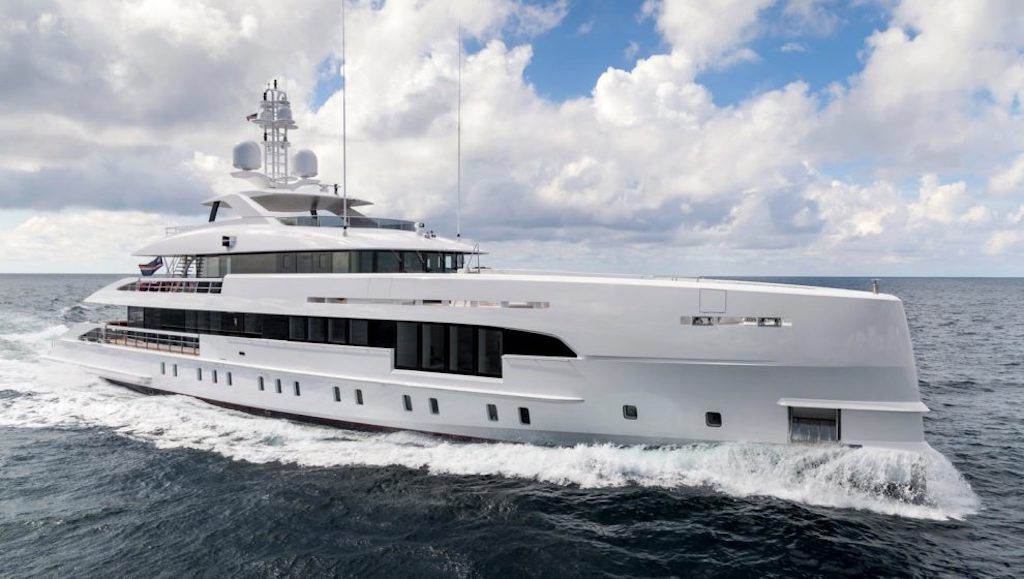 The sistership to award-wining hybrid superyacht Home just found an owner. Built on spec, Dutch builder Heesen launched the 163-foot Project Electra last month from its Oss, Netherlands, shipyard, and this week announced that it was sold. The fast-displacement hull form (FDHF) created by Dutch hydrodynamicists van Oossanen Naval Architects and crafted by Heesen’s in-house welding team sports a slippery hull, which provides greater efficiency, and a shallow draft, allowing for Caribbean cruising and exploring anywhere else you might desire. Its near-silent propulsion system will allow the yacht into environmentally sensitive locations as well as marinas with noise restrictions.

As the second hybrid FDHF in Heesen’s fleet, Robb Report editors were curious about the differences between the first hull, Home, and the new Project Electra. “There are no differences,” says Mark Cavendish, director of sales and marketing for Heesen Yachts. “They are part of the same series, the 5000 Aluminum hybrid.”

Considering that Home was delivered in 2017 and Project Electra will be delivered in April 2020, one could assume these sisterships would have differences in their propulsion systems or some other technology. “Electra’s software system is the newest, but Home got the update, so they are the same,” says Cavendish. The hybrid power and propulsion systems on both yachts are quieter and more fuel-efficient than old-school diesel engines. Project Electra’s hybrid package is a combo between conventional diesel power and diesel-electric power. And its four cruising modes give captains the choice in how much power is being used, which can reduce fuel costs.

Project Electra’s four modes include (obviously) the hybrid mode, which cruises up to 9 knots and produces 46 decibels of noise (Heesen compares it to light rain). A couple of 170 hp water-cooled DC electric shaft motors propel the vessel. Advantages of this mode include cruising in silence and a greater ability to maneuver in tight spaces, such as a packed marina or a small cove. The yacht’s economic mode is good for longer passages and travels between 9 and 12 knots using the main engines and no generators. This mode means less fuel consumed (26 gallons per hour at 12 knots) and longer generator life. If cruising at 12 to 15 knots, Project Electra is in traditional cruising mode. Diesel engines power up the yacht’s propellers and the hotel load is taken care of by the generators. Boost mode allows the yacht to hit its 16.3-knot top speed by way of the generator-powered shaft motors joining the main engines, giving the yacht a sort of turbo boost for high-speed cruising.

Frank Laupman of Omega Architects designed both Home and Project Electra’s exterior lines, giving them a near-vertical bow, long waterline and lots of glass. He was sure to provide guests with all kinds of outdoor areas like the large beach club; seating area forward of the bridge and the accompanying bridge-deck aft dining area; a large sundeck with hot tub, sun loungers and shaded bar/lounge area; and the aft main-deck lounge.

“Bespoke furnishings are handcrafted with soft edges and flowing lines, creating a tranquil  environment. Dark oak flooring and subtle wooden accents highlight the bright fabrics and paneling for a welcoming effect,” says Cavendish. “The use of mirrors inside the main saloon cleverly provides a sense of space and a unique connection to the outdoors.”

The striking stairway in the formal entryway.  Heesen

Even though Project Electra’s interior design and layout was already in place when the new owners purchased the yacht, they “are working with Sabrina Monte-Carlo to select loose furniture, decoration and art-de-la-table,” says Cavendish.

The Heesen shipyard has several other hybrid yachts based on this design under way. “We are currently very busy with a few big projects, such as Sparta, SkyFall and Cosmos,” shares Cavendish. “In fact, on board Cosmos we have a battery peak shaving system that allows you to run the boat quietly for some time using the extra energy generated during the cruising times.”

Project Electra will be delivered to its new owners next month.