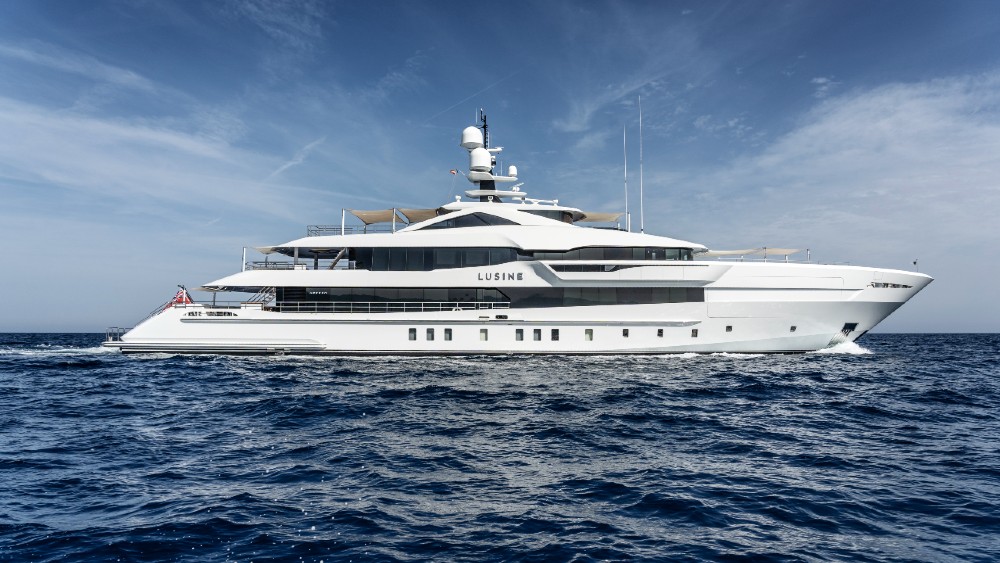 Lusine, the 197-foot custom displacement yacht built by Heesen, is a bittersweet boat. It has an out-of-this-world interior containing more than 180 rare materials, including an intergalactic slice of a meteorite. But the owner, who relished the chance to specify every detail, passed away just one week before the yacht was launched. He never saw his dreamboat.

Delivered in February 2022, Lusine’s four-year build continued throughout the pandemic. The one fly in the Covid ointment was the owner’s inability to travel from his home in the Middle East, which ruled out visits to Heesen’s facility in The Netherlands. He was highly specific about what he wanted, even requesting the inclusion of a shoe bench, where guests could leave their footwear, as well as hand-washing basins on every deck, per his religion.

Following his death, the owner’s family put Lusine and his second yacht—the 237-foot Espen Øino-designed Albatross—up for sale. Robb Report was aboard Lusine in September during a short cruise from Monaco to St Tropez.

Lusine—meaning moon in Armenian—is defined by its sleek and sporty exterior. Designer Frank Laupman of Omega Architects placed a significant emphasis on spending time outdoors with family. A sun lounge and al-fresco dining area for 10 guests was designed into the aft main deck and shaded by an overhang, while also including a refreshment center and two large televisions. On the forward upper deck is another large social area with sun pads and lounge area for informal dining.

On the sun deck, a touch-and-go helipad is personalized with a crescent moon symbol, which replaces the H found on standard helipads. This detail, specified by the owner, is found on the floors of all the exterior decks.

The outdoor areas are indeed sociable, as we discovered on the short hop to St. Tropez. I spent time on the bow lounge, listening to a crew member with a guitar playing, with the ocean passing by. It was windy up front, but very comfortable—as was the aft deck bar, another area where guests naturally gather.

The helm is not necessarily a social spot, but there are lounges where guests can watch the skipper and his team at work at the advanced helm. “Lusine operates as a completely paperless yacht, meaning all charts and maps are digital,” Captain Varun Raju told Robb Report.

In fact, the only charts found on board are in the wall art in the near full-beam main salon. Made from blue agate and straw marquetry, they depict celestial constellations. It is also here where the boat’s “moon stone” is located—a meteorite inlay in the main salon coffee table, surrounded by palladium leaf. “This is the closest I will get to touching something from space,” mused Varun.

Penned by Sinot Yacht Design, the interior dazzles with more than 180 rare woods, precious fabrics and exquisite materials. Versailles-patterned oak floors, crystal chandeliers by Precision lighting and gold-leaf and white-onyx sideboards bring the bling. Puffer fish and stingray skins line the walls. Clocks of all shapes and sizes are found in every room to symbolize the owner’s mantra that “time is precious.”

“He was a details man who drilled down on every aspect of the design,” says Paul Costerus of Sinot. The owner met with Sinot at least a dozen times, bringing hundreds of samples for every possible material for Lusine, and showing the design team exactly what he wanted—from the heights of the furniture to specific nooks near the bed for storing his reading glasses, to the height and depth of bathroom cabinets to ensure towels with a specific thread-count would fit.

That obsession with detail shows across the interior. He wanted a luxury yacht with a fine interior— not a Middle Eastern palace—but he also wanted to tell a story. The extraordinary number of materials certainly serve as talking points. The bit of satellite, which he referred to moonstone, is a real conversation starter, for one. But he also specified that moonstone gems be part of the celestial star charts, as well as part of the coffee table.

Spaces were large and the volume of materials made everything feel hugely tactile. I wanted to reach out and touch the walls and finishes.

As one would expect, the owner also thought hard about crew service to minimize disruption to guests. On his yacht, guests had pride of place. A central-atrium elevator transports the owners and guests from the lower deck to the sun deck. The elevator is beautiful, but the the multi-deck 3D-leather artwork by British artist Helen Amy Murray surrounding is more impressive. It reflects three dimensions of nature: the lower deck shows underwater marine life, above is illustrated with birds and clouds, and at the top, celestial moon and stars.

On the dedicated owner’s deck is a full-beam suite with king-sized bed, his-and-her bathrooms and a study. At the touch of a button, the master suite windows frost, creating a fully private haven. The owner’s private deck has lounge seats that face the stern, with an on-deck jacuzzi. The area is also set up for intimate private dining.

The VIP suite with private office is located on the same floor, with a marble ensuite and underfloor heating. There are also four lower deck twin cabins.

On the lower deck, a full-beam swim platform with an on-deck shower is where guests access the water. There is also a tender and toy garage with a day-head. An additional forward tender garage holds a jet ski and two tenders, including a 270 Dauntless Boston Whaler. Gull-wing doors mean the tenders can easily be launched from the side.

Lusine‘s owner wanted the boat to be a social haven, inside and out, that would be used often by family and friends. In the end, he accomplished that mission.

Check out photos of Lusine here.