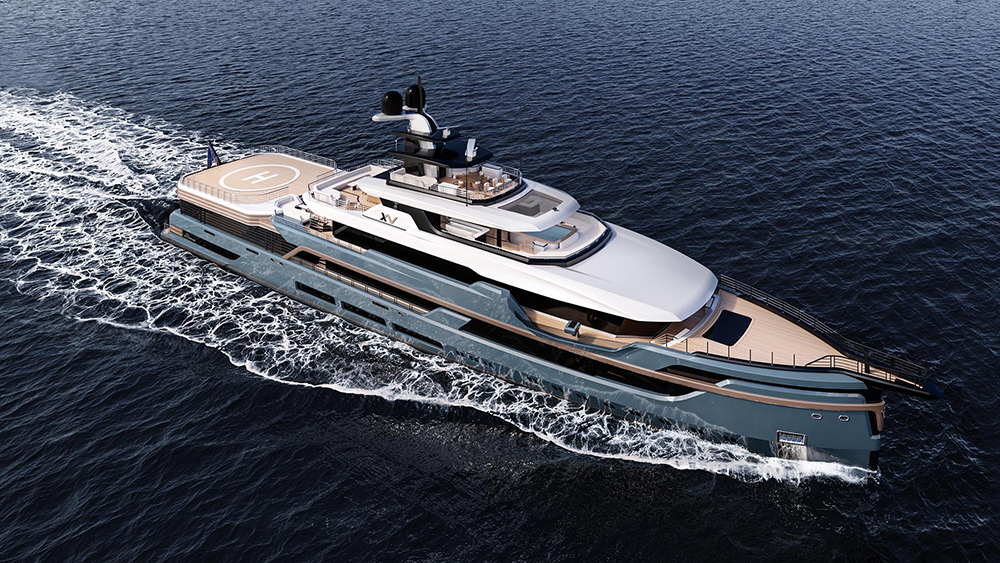 The Dutch yachting giant and prolific London studio just unveiled a groundbreaking superyacht concept at the 2022 Monaco Yacht Show based on a design that was first floated four years ago.

The new 220-footer is the bigger and better successor to the duo’s 187-foot expedition vessel Xventure, which was presented in 2018. The newcomer, known as the XV67, builds upon the good looks and rugged capability of the previous craft, but has “new solutions, new layouts and new appeal,” according to the team.

Onboard, meanwhile, the tenders were moved to the open aft deck to create more interior volume. The space that was previously taken up by a garage was used to increase the size of the guest cabins. This change also meant the designers could create a three-story owner’s stateroom with a dedicated deck. Another positive is the fact that the aft deck can accommodate larger tenders and subs than the garage ever could. Other highlights include a touch-and-go helipad, a set of expandable platforms aft and a sprawling lounge at the bow.

Billed as a “cross-over,” the XV67 is a robust explorer capable of traversing the globe yet is still stylish enough to cruise the waters of Saint-Tropez and look right at home. The vessel has a clean-cut, avant-garde exterior with bold lines and a strong silhouette. She has the same sturdy steel hull as the Xventure but is a good 33 feet longer than her predecessor.

“The new XV67 remains true to our original design intent: to create an exceptionally capable and beautiful bluewater voyager that will inspire owners to venture into new terrain,” the Winch team said in a statement. “And turn heads wherever they go.”

Heesen and Winch say that the XV67 will act as a springboard for a client’s creativity. To that end, you are able to tailor the yacht to suit your tastes. That extends to the engines, too. You could opt for a traditional diesel system, though hybrid propulsion is now available on all Heesen yachts (including XV67).

Sounds like the XV67 will be improved further still.