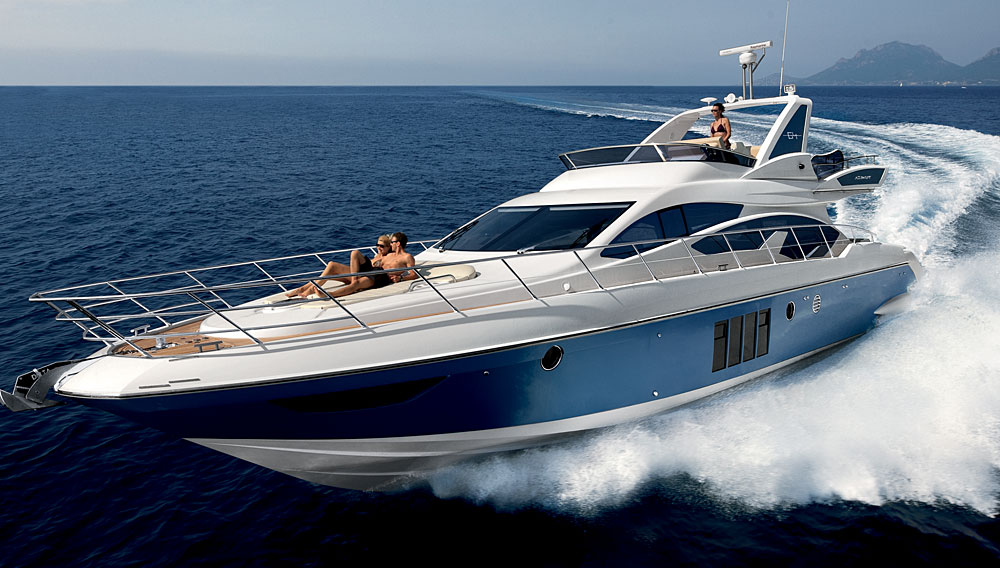 As the heir apparent to a popular model, the new Azimut 64 maintains the best traits of the 62, while establishing new standards for flybridge design. The profile is certainly sportier than a traditional flybridge, with curvy salon windows, swept-back arch (with a tinted mirror finish along its side to add reflective pizzazz), and sleek hull that looks more like an express yacht.

But the bridge is as functional as any flybridge in its class, even more so than many competitors. The double-helm seat provides excellent visibility, its Easy Docking system allows for joystick maneuvers in tight quarters, and the Seakeeper gyro system reduces roll by up to 80 percent. The aft open section allows for sunning and socializing, while an optional barbecue provides alfresco dining. The 64 also has a high-tech Bimini that deploys even at top end, providing sun protection without limiting air flow. Even the most scalding days can be enjoyed on the bridge.

Of course, being an Azimut, the interior was conceived to deliver the most of every inch without looking cramped. The light, airy salon, with its dinette/galley positioned to the front and long, U-shape lounge layout at the rear, creates two separate social areas without the need for bulkheads. Natural light is plentiful with the 360-degree windows.

The master suite below also has two banks of hull windows that bring out the brightness of the pickled-oak joinery, along with an en-suite head (shower is actually in a separate room) and dinette with two sofas. Given the length overall, it’s a palatial suite. The VIP stateroom in the bow also has a generous size, with its own head and abundant storage space.

Azimut has put significant resources into perfecting its materials and construction technologies over the last two years, so the new 64 is a tough boat designed to handle all sea conditions. But it is also extremely lightweight. The twin 1150-hp Caterpillars give this next-generation yacht a higher top end than its predecessor, 33 knots, but greater fuel efficiency. It’s a worthy heir to the crown. (www.azimutyachts.net)