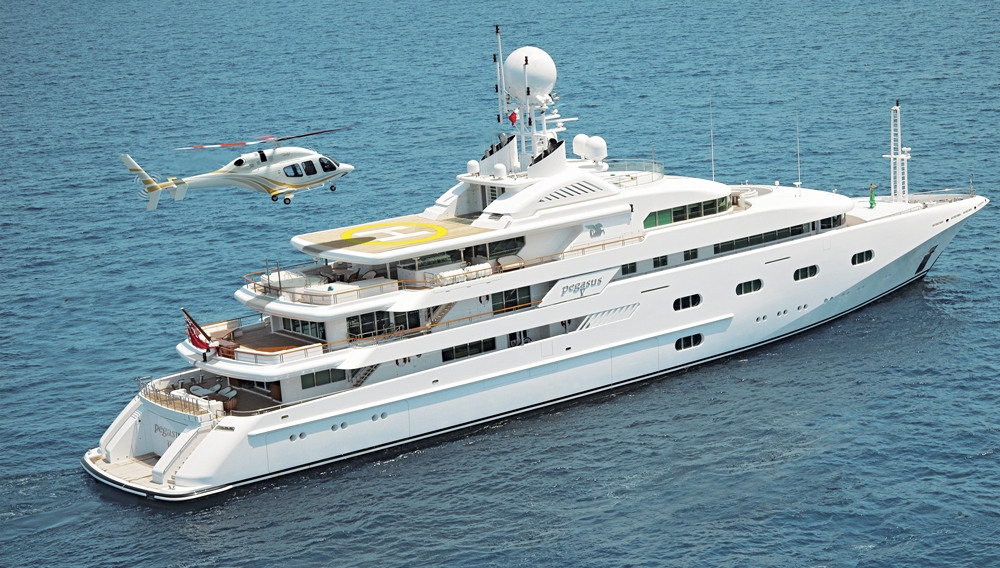 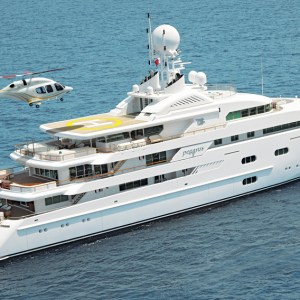 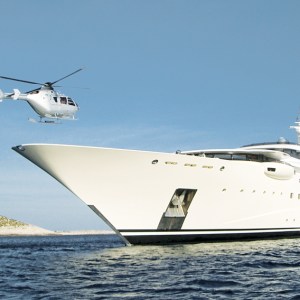 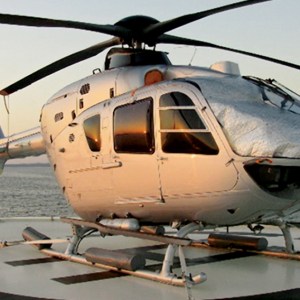 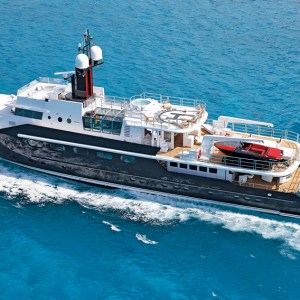 The quickest, most convenient type of yacht tender may be worth the compromise on space.

“I don’t worry about money anymore,” the Iowa businessman Roy Carver was quoted as saying in 1975. “I worry about time—how much time do I have left? Everything I do is based on making as much of the day, the week, the month as I can.” Apparently Carver, who was 65 at the time and had made a fortune as the founder and chairman of a business that made tire-retreading material, meant what he said. That same year he took delivery of Lac II, a 148-foot yacht built by Feadship. Carver would not have to waste any time getting on or off the yacht, because it featured a roll-out deck large enough to hold a Bell 206B Jet Ranger. Lac II was the first-ever private yacht with a helicopter landing pad.

Although the precedent for helipads on superyachts was set four decades ago, says Ronno Schouten, it is only in the last 10 to 15 years that they have become popular features. Schouten is head of design for Feadship at De Voogt Naval Architects, the Dutch firm that designed Lac II (which is now known as NOBLA). De Voogt also designed The Highlander, a 162-foot Feadship that was built in 1986 for Malcolm Forbes and included a helipad. Schouten notes that many recently launched and soon-to-be-launched yachts are too large to fit in marina slips and have to be anchored offshore. Some of these yachts’ owners and guests find it tedious to travel to and from port in a tender. “Consequently,” he says, “owners feel the need for a helicopter.”

Given the demand for helicopter transport, says Crispin Baynes, a sales broker for Burgess Yachts, a helipad can be a wise investment: “If you’re building a yacht today above 60 meters [180 feet] and you’re asking, ‘What should I have for potential resale and charter down the line?,’ it’s one of the boxes you should tick. If you have it, that increases the demand and desire for the boat.”

Retrofitting a yacht with a helipad is not always possible—or advisable. “While some yachts can be retrofitted to accept helicopters, not all can,” says Massimo Vilardi, a business-development executive with Camper & Nicholsons’ superyacht helicopter consultancy department. “The deck on which the helicopter lands must have specified structural strength, or load capacity, dependent upon the particular aircraft. Retrofitting a yacht to accept a helicopter is generally expensive and is rarely as desirable as designing the yacht for a specific helicopter in the original specification.”

Of the superyachts that can accommodate a helicopter, some have a touch-and-go pad, including Dragonfly, a 240-footer launched by Australia’s Hanseatic Marine in 2009. Others, such as Naia (formerly Pegaso), a 241-foot expedition yacht built in 2011 by Spain’s Freire shipyard, feature a hydraulic helideck that extends and retracts. Then there are yachts such as Ecstasea, a 282-footer that Feadship built in 2004. It has two helipads, and the forward one descends into the hull to become the floor of an enclosed hangar.

The most common type of helipad is the touch-and-go, which enables a yacht to accommodate takeoffs and landings but not to stow the helicopter on board. While its name suggests convenience and ease of use, a touch-and-go helipad can take up a considerable amount of deck space, and it can carry risk, says Nigel Watson, CEO of the British helicopter operator and aviation-management company Luviair. “You can’t say that touch-and-go is quicker so it can be smaller,” says Watson, who also owns a company in the South of France that, among other services, trains crew members to work on yachts with helipads. “You think it’s for quick use in and out, but touch-and-go is dangerous. When do you think is the most dangerous time operating on a boat? It’s when we touch and when we go.”

He says that because owners of yachts with touch-and-go helipads do not have a helicopter on board, they often overlook the importance of stocking that helipad area with emergency equipment and training the crew how to respond to a fire, a crash, or other emergency. “All of the things that you’d expect at an airport you’re transferring to a yacht,” he says.

Vilardi recommends that if you are going to stow a helicopter on a yacht, you do so in an enclosed hangar that protects it from the elements. “Helicopters are built as light as possible using high-strength alloys that don’t like a salty atmosphere,” he says. “Nowadays, composite plastics are being used more and more for the airframe. But engines, gearboxes, shafts, and control gear are inevitably made from metal. A helicopter has proportionately more safety-critical items than a fixed-wing aircraft, and there are also hydraulics and electronics to consider—they all have to work correctly for the machine to be safe.”

Nevertheless, hangars are rare because they take up space that could otherwise be used for staterooms or other living areas. “Then it becomes a case of an aircraft being stowed on the upper deck,” says Watson, “and the acceptance of an ongoing corrosion problem for the time that the helicopter sits on the deck.”

Watson says he usually has to educate yacht owners about the intricacies of helicopter maintenance and operation and convince them that a helicopter is unlike any other tender. He says that often new superyacht owners equate a helicopter with a motor vehicle and think that it can be operated as easily and with the same amount of preparation. “There’s a common misconception that you just jump in them and you go,” he says. “There’s also a misconception that if you’re a helicopter pilot, you can fly in any circumstance.” He notes that pilots require special training and certification to take off from and land on a yacht.

Owners who envision flying themselves from deck to shore should probably abandon that notion, according to Vilardi. “To learn how to fly a twin-engine helicopter safely on and off a yacht will take years,” he says. “My suggestion is to either retain a helicopter-management company that will provide a competent pilot, necessary maintenance, insurance, licensing, registrations, et cetera, or hire a full-time qualified helicopter pilot experienced in flying and landing in all conditions offshore. Former military pilots frequently have appropriate experience.”

Though there are challenges associated with having a helicopter on board or with just providing helicopter access to a yacht, there are also plenty of perks, such as sightseeing flights or heli-skiing outings. “It’s not easy,” says Baynes, “but it opens up the possibilities for what you can do.”

Best of all, as Lac II’s original owner presumably envisioned, a helicopter or helipad enables owners and guests to fly quickly to their yacht and make the most of the day, week, or month that they have on board. “It’s time and money,” says Baynes. “Most people [who own superyachts] have the money, but they don’t have the time. A helicopter gives them that.”