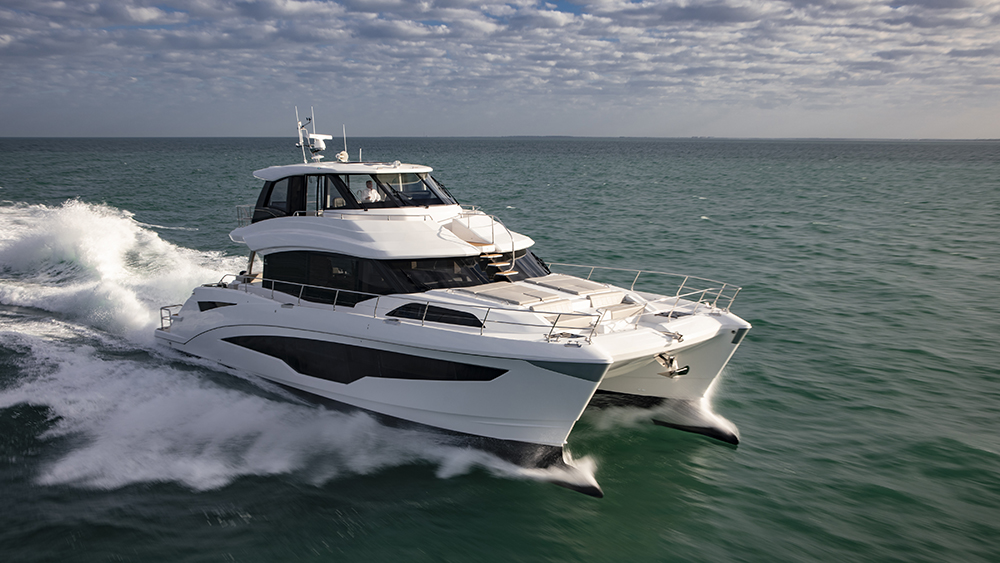 Large power catamarans have traditionally been boxy and slow, often just knockoffs of sailing multihulls minus the masts. But the segment is quickly evolving toward elegance, speed and high design. For proof, look no further than contemporary launches such as Lagoon’s Sixty 7, Horizon’s PC74, the Aquila 70 and the 80 Sunreef Power Great White, owned by Rafael Nadal.

Great White made a social-media splash last summer, in time for Nadal’s 34th birthday, with the striking azure-blue-hulled yacht demonstrating a big cat’s potential: a palatial yet refined salon, rear steps leading directly into the water and sheer volume that can’t be matched by a traditional, narrower monohull. Sunreef is now working on an electric version of the 80, and a 100-footer is under construction. While custom yards have launched larger, head turning one-offs, semi-custom builders see the future in the 60 to 80-foot range. But to justify price tags of $4 million to $7 million, these new cats must have smarter, more visually compelling designs in addition to tasteful furnishings and high-tech features. Horizon designed a private owner’s deck into its PC74, while Lagoon’s new Sixty 7 uses every inch of its exterior for social enclaves.

“We knew we had to differentiate ourselves with aesthetics and speed if we wanted to create demand,” says Lex Raas, president of Aquila Power Catamarans’ product development. “Our competitors aren’t other cat builders, they’re Azimut and Sunseeker,” he says, referring to the exemplary yacht manufacturers. “We knew our 70 needed to look and perform like theirs.”

And its recently launched 70 does pull off a sleek, yacht-like profile, thanks to J&J Design. The four-stateroom multihull features a fittingly design-minded interior, with a Gaggenau cooktop, oven, wine chiller and espresso machine, plus Dekton stone counters surrounding the touchless faucet. And thanks to the 27-foot beam, the 300-square-foot salon looks more at home on a larger yacht, with whale-tail Natuzzi sofas (the design is inspired by Moby-Dick) and a convertible eight-person dining table from the brand’s Saturno Collection instilling a relaxed but modern feel. The full-beam master suite is similarly expansive, with a long, private en suite and a storage area with enough space for several walk-in closets.

Aquila’s other mantra is performance. During Robb Report’s recent sea trial of the 70, the joystick steering allowed for easy maneuvering in tight quarters, while its twin 1,000 hp Volvo Penta inboards delivered a speedy ride through the Gulf of Mexico, with the multihull hitting a respectable top speed of 31.4 mph, a pace achievable in no small part by the weight-cutting afforded by the brand’s extensive use of carbon fiber. Which all goes to show that a new generation of big cats isn’t just arriving quickly, but in high-tech and high style to boot.