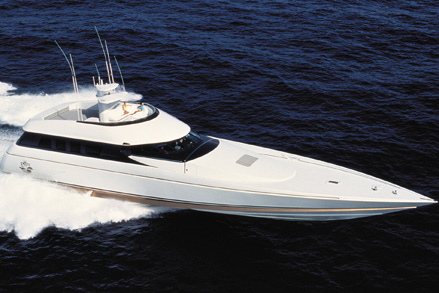 Haute couture will soon become part of one of the racing world’s most famous luxury yachts:  Bespoke yacht broker Weyves Yachts has sealed a partnership with fashion and perfume designer Thierry Mugler to create a custom interior for the world’s fastest yacht. The 112-foot Gentry Eagle, built by racing legend Tom Gentry, broke the record for fastest transatlantic crossing in 1989, shattering the previous record by Virgin tycoon Richard Branson.

The Gentry Eagle design project is one of several upcoming ventures between Weyves Yachts and Agent de Luxe, a fashion-design agency run by Donald Potard, who spent 25 years as president of Jean Paul Gaultier. Enlisting a fashion designer to redesign a yacht is not a standard decorating move, but Potard believes it is the sign of a new generation. “Fashion designers are more than just clothing designers today,” says Potard, “they influence a lifestyle.”

“Yacht owners are using their vessels as places to entertain, and they want to express their personal style,” Potard said. Mugler’s redesign will stay true to the original owner’s sense of style but will incorporate Mugler’s uniquely glamorous touch. “Crystal, chandeliers, metals?the interior will have a distinctly ‘Mugler-esque’ feel,” Potard said. Mugler drew inspiration from films like Barbarella and the Star Trek series to create the futuristic interior as an homage to Gentry’s favorite films.

The $5 million redesign is expected to be completed by October 2009, and the yacht is estimated to sell for about $10 million. (na@weyvesyachts.com).